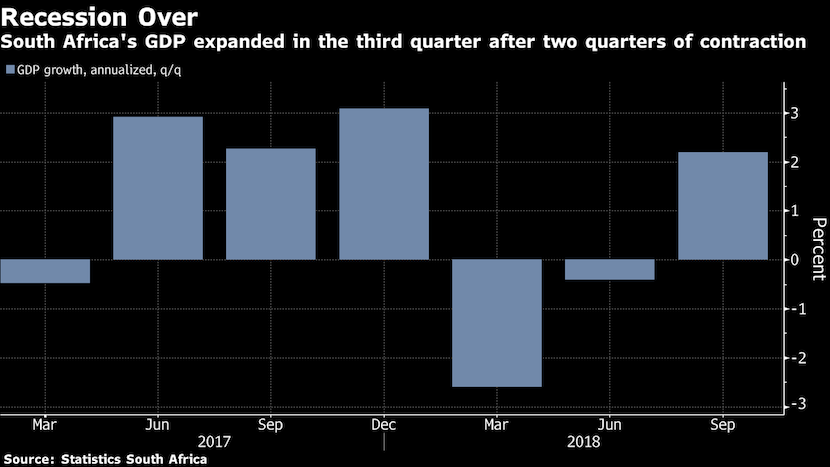 CAPE TOWN — So long as our population growth way outstrips that of our GDP, a 2.2% quarterly increase, even if it is the largest in five years, won’t put more bread on the tables of most South Africans. That’s the bottom line to what otherwise is certainly good news, given that the number exceeds expectations and shows the strength of the manufacturing and agriculture sectors in their contribution to the overall economy. A minus 8.8% growth in the mining sector over the latest quarter however reflects major local policy uncertainty in spite of revisions to the formerly disastrous Mining Charter -and it must be said, poor commodity prices internationally. Some observers are even predicting the demise of the ageing mining sector in the medium term, though much potential remains should the regulatory environment loosen up. Nothing worth cracking open the bubbly for here, though we’ll take whatever we can get. – Chris Bateman

(Bloomberg) – South Africa emerged from its first recession in almost a decade in the third quarter as recoveries in manufacturing and agriculture contributed to an increase in economic growth.

Gross domestic product rose by an annualised 2.2% in the three months through September compared with a revised 0.4% contraction in the prior quarter, Statistics South Africa said Tuesday in the capital, Pretoria. The median estimate of economists surveyed by Bloomberg was for growth of 1.9%.

The rand gained as much as 1.1% before paring the advance to trade 0.9% up at 13.5655 per dollar by 1pm in Johannesburg, the strongest level in almost four months. Yields on benchmark government bonds dropped and stocks reversed losses.

The consumption-heavy configuration of the expansion brings doubts over how sustainable the recovery is. We were cautious about the prospects for capital investment but the 5.1% contraction in the third quarter was a weaker print than expected. This bears evidence that the boost in business confidence earlier this year has yet to translate into spending decisions. We expect this to remain the case in 2019, with the likely result being the economic recovery stalling as the expansion in private consumption weakens. – Mark Bohlund, Bloomberg Economics