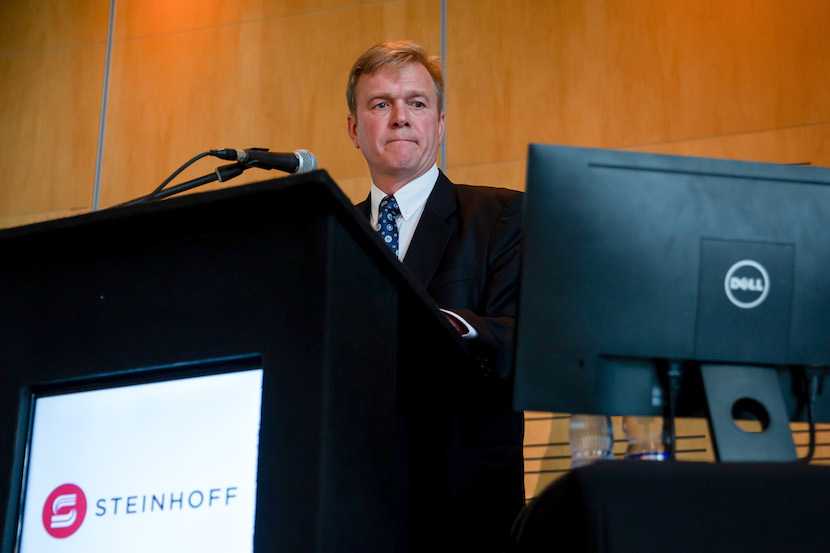 Embattled Steinhoff lifted its veil yesterday for the first time since the once mighty group was brought to its knees after the disclosures of massive fraud and corruption conducted over more than a decade. It wasn’t pretty. Punters who had pushed the share price to 148c ahead of the presentation were licking their wounds as the price fell sharply as the depth of the problem was exposed, with the shares closing the session at 124c. It has taken literally hundreds of skilled financial investigators a full 20 months to “straighten the plate of spaghetti” ahead of the first presentation to investors since the bombshell exploded in December 2017. Here CEO Louis du Preez answers the two questions asked of him daily, including: When is former CEO Markus Jooste going to jail? – Alec Hogg

I get two questions daily. One is when can we get a copy of the PwC report, secondly when will Markus Jooste be arrested.

Let’s deal with the first, the forensic investigation. The board engaged PwC via Werksmans Attorneys to conduct an independent investigation. We soon realised, to have credibility, it had to be overseen by an independent new board. That was a wilful decision taken by the board and that committee, when put in place, was comprised of supervisory board members and myself who were not board members of the group as of December 2017. It took some time to finalise, and the overview of that report was published on the 15th of March. We believe that it is important to protect the privilege in that report for two reasons. The one is the group faces significant litigation. That report is just as important for outbound litigation and the privilege in that report has to be protected to ensure that the group can use the findings in outbound litigation. Ultimately the primary purpose of that report was to enable Philip, Alex and the team to finalise the reinstated 2017 report and prepare the 2018 financial statements. We have realised, after we’ve received that report, that further work needs to be done. That work is ongoing and its primary claim is to investigate possible claims against third parties and entities. The same independent committee is overseeing the commissioning and the finalisation of that report. It’s important to bring to your attention that we do not anticipate any further impact on the financial statements as a result of this next phase of investigation.

So dealing with my second question, the litigation and regulatory engagement. The group has been very public about its announcements and the financial statements that have been released for 2017 and 18. The group faces significant litigation – predominately on two fronts. The ultimate holding company level and then on Steinoff International Holdings now Proprietary Limited, the old listed entity, a South African entity. That litigation I can put into two different classes. The one class is predominantly so-called vendor claims – people who have sold businesses or delivered shares and in return therefore received Steinoff shares and on the other hand you have so-called class actions – people who acquired Steinoff shares in the market from third parties. They allege that as a result of the financial information that was bought out by the company, it was factually incorrect, false and misleading and therefore say they have a claim for damages against the company. Those are the two sets of litigation that the company faces.

Read also: Expert: Global investors KNEW Steinhoff was about to crash, so why didn’t SA investors?

This litigation is also overseen by an independent subcommittee of the board. I assist them from an executive perspective and these are very seasoned, well experienced individuals that have dealt with litigation of this nature all across the world. We as a group realise that ultimately it’s not our job to look after the interests of stakeholders, to be a litigation law firm. That’s just not what we are. We need to find and we are exploring strategic solutions for the litigation. It’s crucial that we as a group find solutions for the litigation that we currently face. We are on top of that, not just the inbound litigation but also dealing with outbound litigation.

As the company has often stated publicly before, as part of our governance we think it is important to take steps against those who were responsible for past actions, both on a civil and criminal. On a civil basis, we as a group can take action. We have taken certain action against individuals but this is not the end of the road. As we know with litigation, the when is as important as the how. On the criminal side I want to state emphatically that we as a group are cooperating with authorities within South Africa. Please appreciate though, that it is not for the company to institute criminal proceedings against individuals. We will do our utmost to assist. We tender publicly and will cooperate and help as best as we can. It’s just as important and part of our governance processes, that we are in regular engagement with the regulators – not just in South Africa but also in in the European jurisdictions. I am very happy to publicly state from the company side, that we are giving our full cooperation and assistance to regulators.