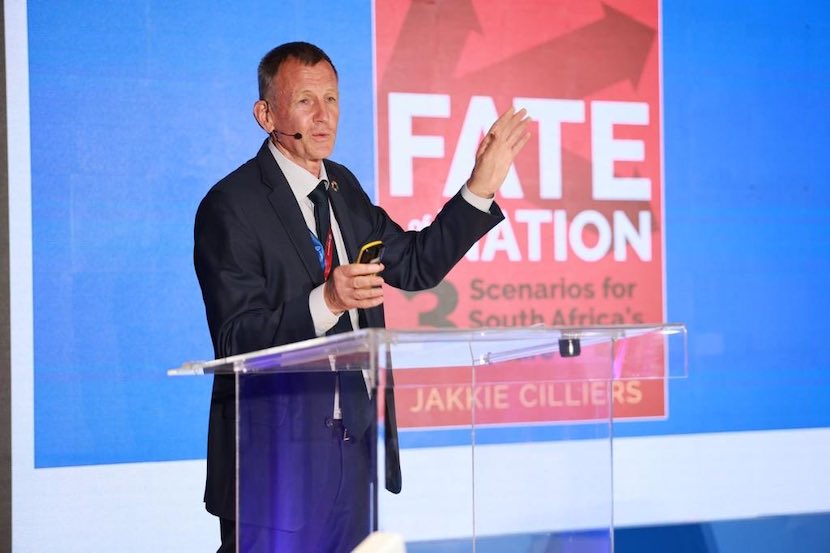 Scenario planner Dr Jakkie Cilliers, who heads the Institute for Security Studies, a leading African think-tank, revisits his superb 2017 treatise and finds the projections are holding up well. In this interview with BizNews.com’s Alec Hogg, he discusses the age of coalition politics ushered in by SA’s recent local elections; the emergence of ActionSA; how the DA and IFP are likely to become ‘regional parties’ and what lies ahead in the national elections of 2024 and 2029. Powerful insight from a thoughtful commentator.

Jakkie Cilliers on his forecasts of coalition politics in South Africa

My forecasts have held up quite well. The book was written in July 2017 and I indicated the ANC would likely lose Gauteng in 2024; that it may go slightly below 50% but will still be the dominant party and rule until 2029. I think that forecast has held up quite well. What I thought would be the best for South Africa was a stable, pro-growth coalition between a reformed ANC and the Democratic Alliance (DA).

Of course, that is the only way in which South Africa, after 2024, is likely to gain and retain a degree of stability. One will have to see if the DA and the ANC are prepared to enter into that. But between that, the 2024 elections and where we are now, the most important event beyond the release of the Zondo Commission results will be, of course, the ANC’s elective conference at the end of 2022. Depending on what happens there, you may find a splintering of the ANC, in which the rump of the party will stay with Ramaphosa, whom I believe will not be unseated. I think he will stay on as leader of the ANC and president of the country until 2029.

But you may have a slight splintering of the party, where a faction of the ANC hive off and maybe join forces with Julius Malema and the EFF. I don’t think that’s a governing alliance, but it certainly would mean that the ANC could significantly go below the 50%. It will still be the majority party in South Africa and will be able, in my view, to put a governing alliance together until 2029.

On where ActionSA and other political parties sit in the picture

ActionSA is [a force to be reckoned with] but is probably no more than a regional force in Gauteng, for the time being. The DA has also hit a ceiling. I think the prospects are for a much more regional division of power in South Africa, where you could find the DA [and] ActionSA put together a governing coalition together with the Freedom Front and a few others in Gauteng.

In KZN, you may find a resurgent IFP take the lead, depending on who they are prepared to enter into alliances with. The Cape will stay, I think, solidly DA. Once the ANC loses Gauteng, in a sense, its goose is cooked. The central theme of my book, Fate of the Nation, was this division within the ANC, between what I refer to as a reformist faction (led by Ramaphosa) and a traditionalist faction, which is, in a sense, where the EFF and the RET faction within the ANC could find themselves.

It will be a difficult road for all concerned, and the central challenge is that the ANC is losing its influence and power in all the important urban centrum: KZN, around Durban and other areas, in Gauteng and the Western Cape, of course. On its current trajectory, Ramaphosa faces a challenge because he will be squeezed between losing the urban areas and the rural, traditional areas where, in one sense, the RET faction support lies and where, as I said, the EFF may enter into alliance with a faction within the ANC.

On what Ramaphosa is to do in this circumstance

His long game is staying in power. At the moment, he’s probably the last ANC president in South Africa. Also, in accordance with what I wrote about, 2029 will see the first chance that an opposition alliance could put together a governing coalition nationally. Not before that. The ANC will remain in power until then. Like in almost all of southern Africa – almost all African countries – we are slowly seeing the normalisation of politics where coalitions, messy coalitions, are coming to the front in South Africa and, where the country faces, it could be a difficult period.

We have a different constitutional dispensation and the courts, civil society and the media have stood up and forced the ANC into holding it to account for the damage that it has done to South Africa over recent years.

I think everybody is fighting for that exact vote and it can benefit the ANC. But if an alliance or individual opposition parties like ActionSA manage to mobilise that vote, they can grow very strongly. Maybe even the DA could do that, but there would have to be significant change within the leadership and the orientation of the party to achieve this. But that is what they were fighting for.

At the moment, the stay-away vote has huge potential to perhaps turn a party like ActionSA into a truly national party. But then we would have to see action by ActionSA. I’’m not sure a party that grows so rapidly would be able to deliver. It is also quite evident both the EFF and the DA have, in a sense, ganged up against ActionSA, because they threaten both those parties and effectively kept them out of too much influence.

I think it would be very difficult. The DA tried with Mmusi Maimane but it has gone back … I don’t want to say … to its old ways. It really struggles in the media because it is beaten up as a white party of privilege. While, of course, it isn’t really. It’s more multiracial than most other parties but it struggles. I think the DA increasingly is a regional party and we are all looking for new politics like ActionSA to emerge that can attract the stay-away vote.

But make no mistake, the ANC is still the dominant party in South Africa. It will remain the dominant party until 2029 and possibly even beyond that. The history [and] legacy dies very slowly. Will the ANC be able to put together governing coalitions? Or alternatively, will opposition parties have sufficient ideological coherence to put a governing alliance together? That’s very difficult to see. All of that requires access to the stay-away vote because that is what will determine [the outcome].

South Africans are turning away from politics. That is a concern. But it will possibly be able to turn it around if we can find new parties. We can also see the resurgence of a party like the IFP. KwaZulu-Natal is a bit unique in terms of its racial and, particularly, ethnic configuration and the potential role the RET faction can play in that province.