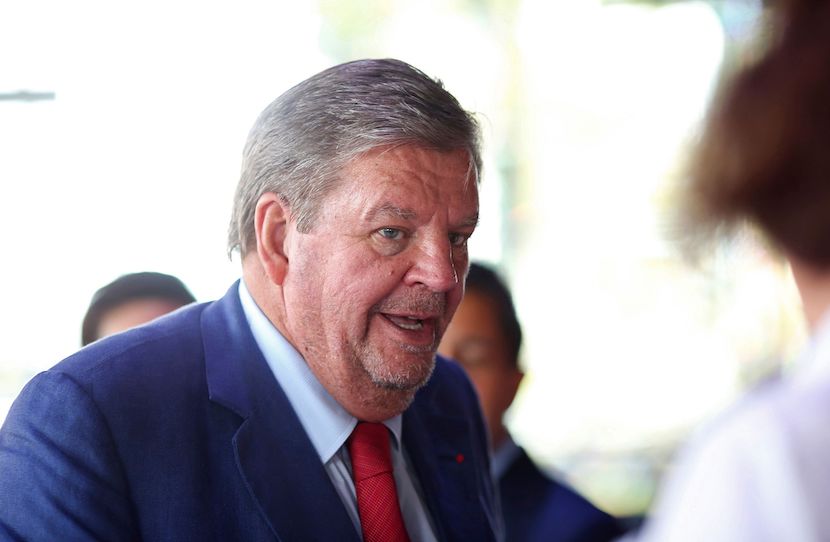 CAPE TOWN — The thing about Capitalism is that you vote with your feet. If the price isn’t right or shopping conditions are off-putting or even hostile, you look for another mall, even if it’s across the border. So, it appeared in the recent Chairman’s Forum, broadcast live on radio to go almost viral on social media as billionaire Johann Rupert crossed swords with unrelenting anti-“White-Monopoly Capital” folk. He’s admired by students of Capitalism somewhat like Trump was in his rise to entrepreneurial fame (not to be conflated with personality styles) and chillingly threatened to bow out of what he sees as a vilifying debate devoid of any possible common ground. That’s his experience. Here, a fascinating historic parallel is made with the 1520 Protestant Reformation, in that once the climate becomes unbearable the intellectuals and entrepreneurs simply bail, most often led by the torchbearers of the principles they hold dear. Rupert may be one such leader. What his opponents are shooting for is apparently irreconcilable with how he sees upliftment and job creation happening. If the historic comparisons bore you, stick around for some unassailable facts pointing to an incipient Groot Trek of capital from our shores. Published first on the EOSA website. – Chris Bateman

Stark dividing lines on the economy and the future of the country were drawn during the Chairman’s Conversation when Johann Rupert of Richemont, Remgro & Reinet was interviewed by Given Mkhari of the MSG Afrika Group. The Black Management Forum called for controlling the “levers of legislation to determine what happens with capital, opportunities and business prospects” (state control of the economy) with Rupert hinting that “it would be quite easy to lose interest: South Africa has one last chance…”

On talk radio, news websites and social media reactions rolled in, many calling Rupert “racist”, “paternalistic” and even “an arrogant ignorant” whilst others concurred with his comments about the young chasing BMWs and immediate satisfaction, rather than patiently building their businesses and wealth.

The event and the reactions thereto is far more than a storm in a tea cup and one that the whole business community should take note of, as well as every company and politician that had attended the recent Investment Summit.

The contours of the Chairman’s Conversation, the few comments from the floor and the tsunami of social media condemnation reminded me of a period in world history that had changed and influenced (almost) everything since then. My sense is that both Rupert and the BMF reckon South Africa is at the brink of society-shaking change as well. That change does not necessarily bode well for the future of South Africa…

Jump back to 1520, the birth period of the Protestant Reformation. The places with political and economic weight were those dominated by the Spanish Court and the vast so-called Holy Roman Empire, under the young Habsburg Charles V. A hundred years later (1620), Europe still resembled the Europe of 1520. To quote Hugh Trevor-Roper:

“Spain and the (Holy Roman) Empire, Italy and the Papacy” were “still the centres of power, wealth, industry, intellectual life. Spain the great world power; south Germany the industrial heart of Europe; Italy as rich and intellectually exciting as ever; the papacy recovering its lost provinces. Now look again in 1700, and how different it is. Politically, economically, intellectually Europe is upside down. Its dynamic centre has moved from Catholic Spain, Italy, Flanders and south Germany to Protestant England, Holland, Switzerland and the cities of the Baltic. There is no escaping this great change.”

When Luther didn’t recant at the Diet of Worms and the realisation that a growing number of territories were leaning towards Protestantism, the Papacy in conjunction with the Emperor and his vassals, kings, bishops and princes embarked on the Counter-Reformation. It was not an attempt to adjust to the challenge of the Reformation: it was a reaffirmation of the old Catholic doctrine and approach.

Trevor-Roper described the impact of the Counter-Reformation as follows:

“there is the reanimation of Catholic dogma… a wave of mysticism reinvigorates the old, decadent machinery which the reformers have attacked. New religious orders are founded. New forms of charity, new devotions, new methods of propaganda bring new resources to the Church and increase its possessions in mortmain. This reinvigoration of the Church is a reinvigoration also of the State which accepts it and which, by definition, is a princely State; for urban republics are opposed to large subtractions from economic life. But when a generation has passed and this spirit has evaporated, the burden of this great increase is both felt and resented. The newly established society, feeling itself vulnerable and threatened, becomes intolerant and turns against the uncomfortable, unassimilated elements in its midst.”

Productive capital (the unassimilated elements Trevor-Roper referred to) was initially hemmed in by the Counter-Reformation with its additional positions, privileges, charities and contributions, thereby rendered less productive. Later, when the burden of the overloaded system of privilege and positions in church and state became too much to bear, the hamstrung entrepreneurial leadership became the scapegoats.

They simply left. It was no longer an osmosis process, but rather an exodus. Not only was their capital (apart from the confiscated remnants) gone, more importantly their productive knowledge found new places to take root:

What triggered this exodus of productive knowledge?

Policies, conditions and circumstances drove the emigration of productive knowledge, not only on doctrinal grounds (that provided the façade and pretext) but by societies that had hardened against them. Trevor-Roper commented:

“In the sixteenth century Italy and Flanders, for centuries the home of commercial and industrial capitalism, so changed their social character that they would no longer tolerate those men who, in the past, had made them the economic heart of Europe. The expulsion of Calvinists from the area of Spanish dominion or patronage — both Flanders and Italy by 1550 under Spanish control — is a social fact comparable with the expulsion from Spain, in the same period, of those other socially unassimilable elements, the Moors and the Jews.”

It was not only the freer atmosphere of Protestantism and the Calvinist work ethic (think Weber thesis) that brought about the geographic relocation of the locus of Europe’s economic heartbeat. Equally important was the deterioration of enterprise-friendly environments in the old heartland and an increasing hostility against the entrepreneurial class. This manifested in:

The economic and intellectual leadership and dominance of (mainly) southern Catholic Europe (Spain, Portugal, Italy and Flanders) before the Reformation had disappeared by1700. Holland, Switzerland, England and the previous Hanseatic League cities of Hamburg and the Baltic dictated developments.

Spain & Italy, dominant in 1620, were economic backwaters by 1700. The erstwhile backwaters – Holland, the northern German territories, Switzerland, as well as England – became the flavour not of the month, but of the next centuries.

Productive knowledge relocated to environments with less burdens and hassles.

South Africa 1994 to 2007 can be compared with the European landscape of 1519 – 1620: a lot happened, major shifts occurred, but the societal landscape at the end of the period still largely mirrored the societal landscape at the beginning. That mirroring, however, doesn’t reflect as yet the growing burden of increasing positions and higher cost. These were still camouflaged by businesses responding enthusiastically to calls from the “Holy Mandela Emperor” government for building a new school, a clinic, providing BMWs for the police, dishing out bursaries, sponsoring educational tours…

Enthusiasm alone is insufficient motivation for sustainability. Businesses (industrial, financial, agricultural, trading, services, construction) were viewed by Government as beneficiaries of the old order and burdened with a massive range of obligations and interferences into the internal workings of these companies: board composition, senior management, racial targets for employment, procurement practices, BEE, even some of the most onerous labour regulatory regimes. Simultaneously tax money (generated by these businesses) were dished out on a range of initiatives to establish new black-owned businesses as preferred entities for government to conduct business with.

The osmosis out of SA commenced with Anglo American, Liberty, Didata, Old Mutual, SA Breweries and others finding new locations for a primary or secondary listing.

The International Panel of Experts on ASGISA under the chairmanship of Ricardo Hausmann, recommended already in 2007 adjustments to affirmative action and BEE to stem the tide of productive knowledge emigration. They recommended numerous interventions that were more market-friendly. All were ignored. The pursuit of the National Democratic Revolutionary agenda and the transformation of society were of higher value than economic growth, job creation and service delivery.

Since the 2007 landscape still largely resembled the one of 1994, and with general enthusiasm spluttering to an end, a renewed thrust – similar to the Counter-Reformation – was launched under the Zuma leadership e.g.:

Those processes were for many too slow (somehow this resonated in a comment about BMWs and sipping cocktails in Taboo) and led to massive looting of the public coffers. At national level (the so-called State Capture), provincial level as well as at local level: all contributing to poor service delivery levels, unfinished cost-overrun project budgets and sky-rocketing of audit comments pointing to wastage, lack of management and corruption.

With the higher growth rate that made the additional costs bearable up to 2007 gone, the cost of the ANC’s Transformation or National Democratic Revolutionary Agenda became too much to bear:

The rhetoric against the formal business community intensified: “white monopoly capital” was denounced not only by Jacob Zuma, but by Cyril Ramaphosa as well. The latter even added the discomforting message, reminiscent of the Nazi’s to the Jews: “Those who don’t like this idea – tough for you. That is how we are proceeding.”  That theme also emerged strongly in his New Deal Manifesto of the CR17 campaign.

The results were not only a deficit in nett Foreign Direct Investment, but a moth-balling or boycott of local productive investment by South Africa’s companies. Where they did invest in new productive capacity, it happened predominantly outside South Africa’s borders.

At the recent Investment Summit Ramaphosa said entrepreneurs should no longer be vilified, but be embraced as heroes. He declared the “investment boycott” as over. The Chairman’s Conversation made it clear that neither the vilification of established enterprises, nor a moratorium on local fixed investments is a thing of the past.

Andile Nomlala, spokesman of the Black Management Forum, said from the floor: “I’ve been offended (by Rupert). We had the opportunity here to understand what our white counterparts think about us… We control the legislation in this country. For us to advance ourselves, we need to clinch the levers of legislation and regulation that will determine what happens with capital, with opportunities and business prospects.”

Rupert’s response was telling: “Our country has got very serious problems, best illustrated by the clear division tonight. There’s clear hatred, clear animosity, insults. Quite frankly, if that is the attitude, we are going to have serious problems. I’ve offered from my side… (but) quite frankly, I am very happy not to get involved, to spend time with friends and children and not to help. Since when you get insulted… Instead of people debating facts, they get personal. They attack individuals and their children. If we carry on like this, the other side loses interest… very quickly…”

It was a chilling and quite direct indication of what could become a reality.

If Ramaphosa’s Investment Ambassadors want to have any impact on investment, they should now focus on retention of productive knowledge since the BMF is actually encouraging the Ruperts and others to pack up and go…

As the Manifest of Piet Retief set out the reasons for the Groot Trek and mobilised many more to trek, Rupert’s statements could in future be considered as a clarion call for a Groot Trek of productive knowledge out of South Africa.