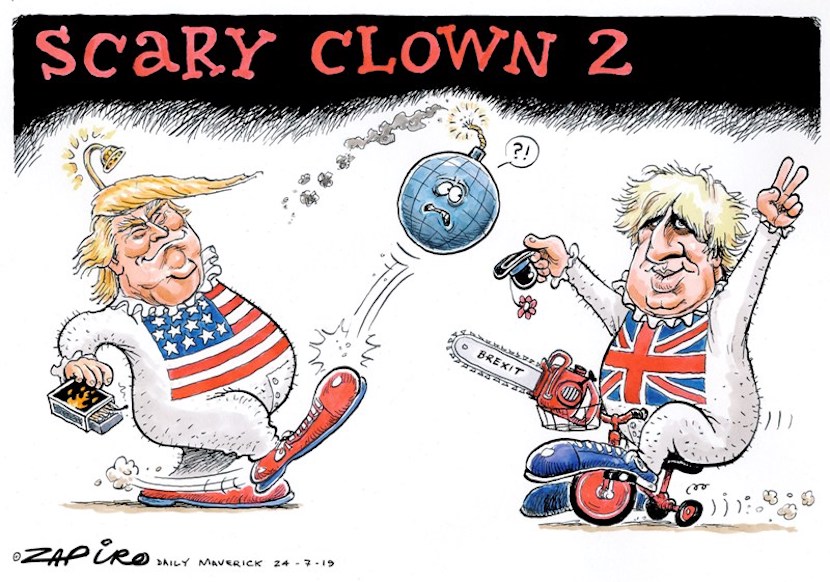 Comparing UK Prime Minister Boris Johnson to President Donald Trump has become a bit trite, even though they endlessly inspire cartoonists and satirists, swapping hairpieces, swaggering over journalists and making outlandish statements. Yet they swim in very different political waters, Johnson a lot more democratically accountable than Trump, who a bit like our own Msholozi whips up the populist crowds and weaves fantastic stories that his die-hard conservative fans believe in almost cult-like fashion. In this timely reminder however, the title given his piece by IRR fellow, John Kane-Berman says it all about the leaders of the two best-known English-speaking nations on earth; two peas in radically different pods. He takes us on a political history tour to illustrate how the British system holds its leaders far more accountable, even between elections (whatever you might say about the interventions of the nobility), while revealing how Congress can make life uncomfortable for a US president, but not unseat him as a British cabinet can its leader. Trump is arguably more untouchable than Zuma was. Let’s just hope he doesn’t lighten their fiscus – the ramifications would affect more than just his countrymen. Story courtesy of the Daily Friend. – Chris Bateman

Boris Johnson became prime minister last week after being picked by barely more than 92,000 members of his party who, as the Financial Times reported, make up a fraction of 1% of the United Kingdom’s electorate.

Actually, this process was a lot more democratic than the ones used in almost all previous choices of Conservative prime ministers between elections. When Andrew Bonar Law died in office in 1923, it was King George V who chose the commoner Stanley Baldwin rather than the glamorous Lord Curzon to replace him as he thought it no longer appropriate for the prime minister to sit in the House of Lords. The king said he wanted his prime minister to face his (Labour) opposition in the House of Commons every day.

Congratulations to Boris Johnson on becoming the new Prime Minister of the United Kingdom. He will be great!

In 1957, when Anthony Eden resigned after his Suez catastrophe, the present queen appointed Harold Macmillan to succeed him after a marquess and an earl called in cabinet ministers one by one to ask whether they supported him or his rival, ‘Rab’ Butler. Some of the ministers likened the experience to being ‘summoned to the headmaster’s study’.

Back in May 1940, Winston Churchill was appointed by King George VI on the advice of the resigning Neville Chamberlain after the alternative, Viscount Halifax, said he was not available, partly because he agreed that the prime minister should be a commoner and not a lord. Like Boris Johnson, Churchill became prime minister with a reputation near rock bottom. He was seen as lacking in trustworthiness, wisdom, and judgement. Only a year before, he had been the subject of a best-selling biography entitled Churchill, a Study in Failure: 1900-1939.

The first foreign leader to congratulate Johnson was Donald Trump, elected by 63 million American voters. This is a greater democratic mandate than Johnson’s. But the strength – the defining characteristic – of the British constitutional system is that it makes for perpetual accountability, which the American system does not.

No matter the size of their mandate, or whether they are appointed between elections or after an election victory, British prime ministers hold office only for so long as they can command majority support in the Commons. Chamberlain thus resigned to make way for Churchill after his support collapsed over his failure as a war leader. He actually won a vote of confidence; what forced him out was a backbench revolt that cut the Conservative majority from over 200 to only 81.

Downing Street says Prime Minister Boris Johnson and U.S. President Donald Trump have agreed to start talks about a free trade deal as soon as possible after the UK leaves the European Union

Sometimes even a cabinet revolt can do the job. Another failure as a war leader, Herbert Asquith, resigned in 1916 when his coalition cabinet told him it was time to go. At the end of 1990, Margaret Thatcher resigned after most of her Cabinet told her she had lost the support of the party.

The American system, more democratic in how presidents are elected, is deficient in its lack of mechanisms for accountability. British prime ministers have to be careful not to provoke cabinet resignations: at times even Churchill was scared of them. American presidents can hire and fire at will, with few political consequences.

Accountability to the legislature barely exists in Washington. Apart from participating in debates, British prime ministers often spend a great deal of time preparing for their question time in the Commons. American presidents usually deliver their state-of-the-union addresses to Congress in person, but otherwise they seldom go near Capitol Hill.

But whereas British prime ministers can be unseated at a moment’s notice by simple majority vote, American presidents face no such threat. Once they have taken the oath of office upon their inauguration, they are untouchable. The only way they can be removed is by the process of impeachment and trial provided for in the Constitution.

When Trump comes out of the shower, and he hasn't done his hair yet….he's Boris Johnson.

However, as we saw again in Washington last week in the attempts of some politicians to bring about the impeachment of Donald Trump, this is a political process masquerading as a judicial one. It is arguably an abuse of the Constitution, although an inevitable one given the absence of any other means of getting rid of the president until the next election.

President Trump can probably ignore impeachment attempts (and even turn them to his advantage). Prime Minister Johnson, on the other hand, will be vulnerable to adverse votes in the House of Commons. The Commons has always sparingly used its powers to force out a prime minister. Mr Johnson will have to lead his party and manage the Commons with dazzling skill to ensure both a clean Brexit and his own survival.