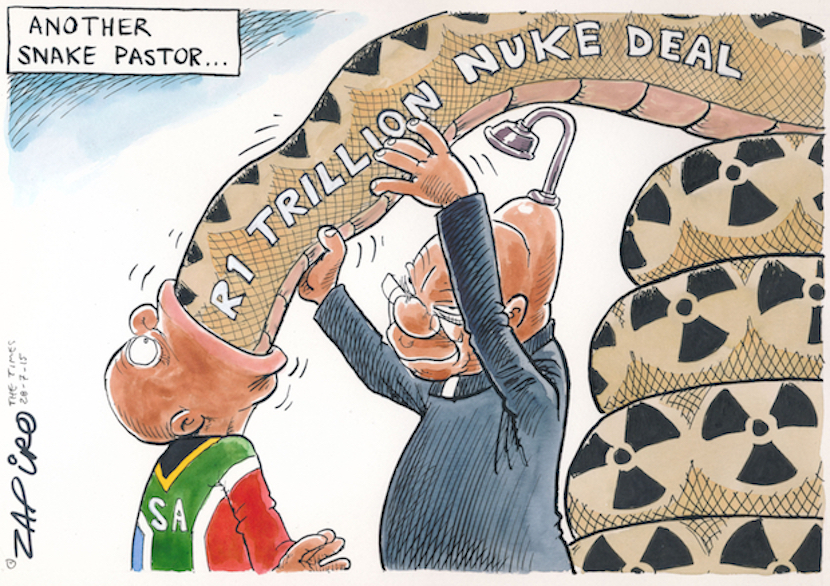 The leader of Economic Freedom Fighters Julius Malema, was the most vociferous critic of the R1trn nuclear deal former President Jacob Zuma tried to seal with the Russians. It was a deal that Zuma was so keen on he re-shuffled his Cabinet and fired former Finance Minister Nhlanhla Nene for refusing to support it. But now Malema has done a 180-degree turn on nuclear energy and is dead keen that Eskom should build nuclear power stations; so keen that he marched with his red berets to Megawatt Park to hand over a memorandum to Eskom, which included a demand for nuclear power stations. Andrew Kenny looks at what is behind Malema’s new interest in nuclear energy and it appears to be a debate on nationalisation versus privatisation with white vs black into the thermal mix. The green solution chosen by the government, which includes renewal energy projects such as wind and solar is seen to be dominated by white capital including foreign companies whereas coal and nuclear energy are the areas which the state controls and is seen as a black option. Kenny who has long been a supporter of nuclear energy, which he believes is the “safest, cleanest, most reliable, most sustainable source of energy” says that turning energy provision into “a battleground between nationalisation and privatisation” could strengthen nuclear power’s enemies. – Linda van Tilburg

As if nuclear power in South Africa did not have enough problems with its enemies, it has now acquired the worst possible friend: Julius Malema.

If we lived in a rational, selfless world, the choice of energy for our future electricity would be clear. We should choose the safest, cleanest, most reliable, sustainable, economic energy. But the real world is irrational and selfish, and so we choose on ideology, politics and vested interests. South Africa faces an uncertain energy future because Eskom has been wrecked by corruption and incompetence, and because our new electricity sources are being chosen by green ideology and renewable energy interests. This wretched scene is made worse by trade-union lobbying, political factionalism and – alas! – the racial divide. Our present is the awful mess of Eskom. Our possible future is the dreadful IRP 2019 (Integrated Resources Plan 2019), a sure recipe for failure.

It is unfortunate that electricity is being used as a battleground between nationalisation and privatisation. Electricity supply is one of the few areas where the state can outperform the private sector – for the simple reason that its cost of capital is lower and it is satisfied with a lower return. Eskom used to outperform every private electricity utility on Earth. Proponents of private electricity suggest it will solve the country’s electricity problems, but every existing IPP (Independent Power Producer) makes more expensive electricity than Eskom. Private supply is now associated with ‘renewable’ energy (here, meaning solar and wind), which is very expensive all round the world. This gives the private sector a bad name. Julius Malema and his like have pounced upon this.

Racial ideologues now say that coal and nuclear are ‘black’ and wind and solar are ‘white’. The ANC, the EFF, the SACP and the unions favour state control. The ANC, which is mainly black, controls the state, the state controls Eskom, and Eskom runs coal and nuclear stations. The private renewable energy companies are run by whites, including the foreign companies. The ‘greens’ are mainly ‘white’. The black ideologues believe – rightly, I think – that white-owned foreign renewable companies are screwing the people of South Africa with their very expensive electricity.

Nuclear power is the worst victim of this battle. Nuclear is the safest, cleanest, most reliable, most sustainable source of energy we know, and very economic. Koeberg is our best performing generator. President Zuma, presiding over the most corrupt era of ANC rule, was probably trying to get some sort of nuclear power deal with the Russians from which he expected corrupt benefit. The Russians, who make superb VVER nuclear power reactors, are cynical on matters where diplomacy and commerce overlap, and would probably have gone along with any government-to-government deal. Our constitution would never have allowed any corrupt deal.

Free, open, transparent tendering on the world market to build new nuclear power in South Africa would have killed all speculation about a secret Russian deal, and would have revealed the true costs of nuclear power. The preliminary stages were begun by the Department of Energy. First there were Intergovernmental Agreements (IGAs) with various nuclear countries including Russia. These would have been followed eventually by invitations for commercial bids to vendors worldwide to build plants here. This process was stopped by the Western Cape High Court in April 2017. An action had been taken by Earthlife Africa and the SA Faith Community to find the IGAs unlawful. The judge found in their favour, on the grounds of incorrect procedures. The effect of the ruling was to stop open, competitive bidding. It prevented South Africans from knowing the true costs of nuclear. It seems some people were fearful that nuclear might be shown to be too affordable.

A modest nuclear expansion, building two units first, financing them on debt (which Eskom has done successfully with coal stations in the past), then building two more, and using the revenue from those in operation to build more, would have been our most affordable path to sound future electricity supply. This was killed by politics, green vested interests and Zuma’s murky presidency.