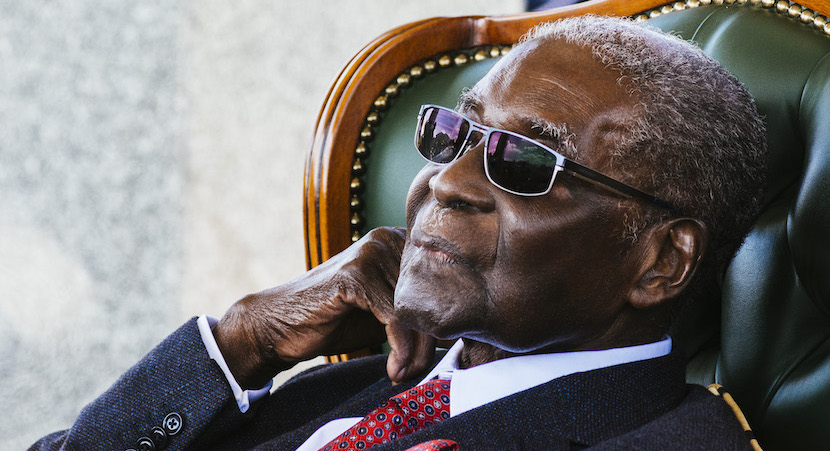 LONDON — The most iconic image of a dictator literally biting the dust was the toppling of Saddam Hussein’s statue in Baghdad shortly after the invasion of Iraq in 2003. We rejoice when strongmen like Hussein, Gadaffi, Molosovic and Mugabe who cause misery to the lives of the people they govern, are removed. But it rarely turns out well as the power vacuum it creates is often filled with anarchy. This is certainly true in the case of the Arab Spring, which the West believed would lead to secular, liberal democracy. When Mugabe was toppled in a soft coup in 2017, “few would have foreseen that just a year later their economy would be collapsing, and soldiers would be on the streets”. The military won the internal battle in ZANU-PF by replacing Mugabe with Emmerson Mnangagwa but it means that the “glue“ that kept the party together is not there anymore and internal division between the police and the army are playing out. In this power struggle and in a similar case in Venezuela it is the citizens of the embattled nation that suffers. – Linda van Tilburg

By Antony Sguazzin and Pauline Bax

(Bloomberg) – When Zimbabweans celebrated after the military toppled Robert Mugabe in late 2017, few could have foreseen that just over a year later their economy would be collapsing and soldiers would be on the streets.

It’s a scenario that’s played out all too often when a strongman who has ruled for decades leaves the stage.

For almost all of Mugabe’s nearly four decades in charge, his decisions were unquestioned, and his ruling Zimbabwe African National Union-Patriotic Front’s grip on power rarely wavered. By replacing him with Emmerson Mnangagwa, the military won a factional battle within ZANU-PF, weakening it, and sidelined the once-powerful police force and secret service that were key Mugabe allies.

PREMIUM: Zimbabwe looks just as it did in the bad, old Mugabe days – Washington Post

“The glue it had in the past 38 years, that cohesive, forced consensus under Mugabe – it’s gone,” Tendai Biti, a senior leader of the opposition Movement for Democratic Change, said in an interview in Johannesburg.

What’s happening today in Zimbabwe echoes the experiences of other African countries and bears similarities with the chaos currently taking place in Venezuela, six years after the death of Hugo Chavez.

In Ivory Coast, Felix Houphouet-Boigny’s 1993 death in office triggered a power struggle over succession and ultimately a civil war that divided the country in two for almost a decade. Somalia hasn’t been a functioning state since Siad Barre was toppled in 1991, and in Congo the overthrow of Mobutu Sese Seko after 32 years in power sparked the world’s most deadly conflict since World War II. In Burkina Faso, the intelligence services fell apart with the ousting of strongman Blaise Compaore, making the country a target of jihadist attacks.

To be sure, there are political differences between West and southern Africa. In the south of the continent most countries, including Zimbabwe, are governed by parties formed during the liberation struggle against white rule. In West Africa, power is often concentrated in the hands of one dominant character who maintains control by weakening state institutions, making those nations even more vulnerable to disruption when they’re gone.

“There’s usually one conductor playing the orchestra,” Vincent Foucher, a research fellow at the National Center for Scientific Research in Bordeaux, said of West Africa. “Once the leader is out, his political party is completely weakened because there is no ideology that keeps it together.”

In addition to the West and central African nations that have fallen apart following the departure of long-term leaders, others may follow.

Paul Biya has been in charge of Cameroon for almost 37 years and the country is riven by a separatist insurgency that’s left the ruling elite increasingly divided. Politicians in Gabon are jockeying for power in the absence of President Ali Bongo, who suffered a stroke in October last year and has been recovering in Morocco. In Equatorial Guinea, Teodoro Obiang Nguema has presided over a kleptocracy since 1979.

For Zimbabwe the outlook is dire. A currency shortage means it can’t afford essential imports, factories are closing and protests over a more than doubling of fuel prices last month were crushed, with at least 17 people killed. Teachers were intimidated by the military in a subsequent strike and soldiers are a common sight in buses, gas stations and supermarkets.

“There have been several confirmed reports of extra-judicial killings, allegations of rape and torture,” said Fadzayi Mahere, a lawyer who ran as an independent in last year’s elections. “The military seems to want its pound of flesh for its role in removing Mugabe.”

Finance Minister Mthuli Ncube says the government is moving as quickly as possible to revive the economy.

“With the situation we inherited, it was also going to be a tough struggle,” he said in a statement. “The process of restructuring, reforming and rebuilding our economy is just beginning. But the train has left the station and we are moving firmly in the right direction.”

Even so the situation is complicated by the tensions between the police and the army, open divisions within the ruling party and rumours of strains between Mnangagwa and his deputy and former armed forces commander, Constantino Chiwenga. Mnangagwa retired four generals this week while Chiwenga was hospitalised abroad for an undisclosed ailment, in what has been seen as an attempt to boost his hold over the military.

Yet the ruling party is unlikely to be dislodged easily. Mnangagwa is a former spy chief who takes pride in his nickname the “crocodile,” with his office sporting a mug themed on the reptile.

“Zimbabwe has a long tradition of political violence, and Emmerson Mnangagwa is a very, very old crocodile who’s always been at the centre of that,” Foucher said. “Even though Mnangagwa has presented himself as a moderate, it’s clear that he wants to hold on to power.”

That hasn’t eased the chaos. Communications officials often contradict each other, and Mnangagwa has twice condemned violence by his own military.

“You don’t have evidence that this is a government that can actually make decisions, whereas under Mugabe you had no doubt who was in charge,” Biti said. “It’s a fragility that I’ve not seen before. The state is in a permanent state of paranoia. That’s why they are putting soldiers on the street picking up people.”