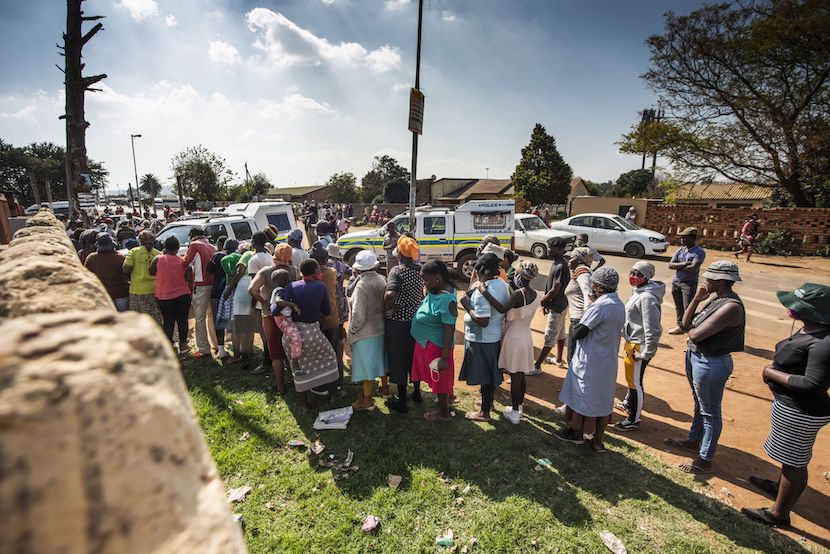 From the start of the Covid-19 pandemic, it has been clear that keeping entire nations self-isolating in lockdown is not possible – particularly where there are high levels of poverty. This was underscored early on by Politicsweb editor James Myburgh, who penned a powerful piece in which he explained that, beyond a certain point, testing, contact tracing and quarantining people would become futile and redundant in South Africa. Reasons included that the “living and transportation conditions of millions are crowded and awful” and that there are 10m twenty-something South Africans – “an age cohort that is highly social, and notoriously irresponsible”. For GG Alcock it is clear that the country has moved to the point where quarantining people is redundant. An expert on the informal economy, GG Alcock reveals the details of his in-depth research to explain why, although many township dwellers are back at work and the lockdown has become a feature largely of those who can afford to live in the suburbs, there is political pressure to maintain the status quo. – Jackie Cameron

Excavating Silence. To be or not to be locked down

The media is full of contradicting public opinions on easing or ending lockdown. The narrative is that the rich want it to serve their selfish and capitalist needs, the poor want it to stay, out of fear and risk etc etc.

I would like to put some perspective to this based on recent surveys in townships and rural areas of SA, through my kasi township network and a survey done with more than 500 small rural farmers by Goat Agribusiness Project (GAP) in KZN which works with thousands of mainly female livestock farmers.

Eleven million social grant recipients earn social grants monthly for handicaps, child grants or old age pensions. Around 3 million earn old age grants of around R1,860, and now receive an additional R500 a month, almost a third more, a big difference. Around 9 million child grant recipients (i.e. mothers receiving on behalf of their children) receive R440 per child, with an average of just under two kids per mom. They receive an additional R500 per mom, so assuming R880 a month, a little over 50% more a month. In total 18 million recipients currently receive a social grant from a population of 59 million. It’s unclear how many will qualify and receive the R350 Covid unemployment grant, but probably another 10 million people? In essence, between one in two and one in three South African citizens will receive a grant.

So do social grant recipients want lockdown to end? Well there are two answers from the various surveys, most do not care one way or another as they receive a grant irrespective of lockdown. BUT here is an interesting thing, many were very afraid the extra money (that R500 or one third or 50% more) would end the moment lockdown goes to level 1 or 2. These people said they wanted lockdown to continue as long as possible as they earned a lot more money while in lockdown.

“Everyone is shocked and they follow the rules. They think grants will stop and they don’t know what will happen then.”

So maybe that answers who is not wanting the lockdown to end?

An interesting dynamic came from the rural survey, many parents said that their costs for food had gone up dramatically now that their children were at home 24/7.  This was because in some cases kids had lunch (or breakfast) at creches or school with feeding schemes. Now parents had to feed their kids at home. Plus as all parents know, children hanging around the house generally snack or eat more. Checking with kasi parents the same emerged, this factor is a major burden on many parents. To quote:

“The schools are closed so the children do not eat at the feeding scheme. So the cost of groceries has increased because I need to buy 2 bread a day.

“Food gets finished because there are school kids at home who make it hard.”

The economically active and lockdown

Let’s check on the economically active side i.e. the informal sector businesses and rural farmers. In essence, all economically active people were desperate to go back to work – the formally employed afraid that jobs would end, and they would be retrenched.

“I am concerned about job losses and poverty in the community.”

Rural small farmers reported no or very minor sales, as they could not find buyers for goats or even chickens. Rural auctions were restricted to 10 people and buyers were prevented from travelling without permits.

“Farming is highly affected. There are no buyers and we can’t go to our gardens. We have fears and the police don’t want to meet us on the way.”

The Mdukatshani Rural Development Project runs the unique GAP goat project in five KZN rural districts. In these districts this programme of rural goat farmers, rural community vets and community-based feed suppliers along with goat auction sites and events is building a massive goat farming sector.  In 2019, this programme generated R80 million in incomes from sales of goats in just five districts. There are 11 districts in KZN. GAP estimates R250m in lost goat sales for rural small farmers throughout the 11 districts over the lockdown to date!

On the township side, there is a huge informal business sector outlined in some detail in my book Kasinomic Revolution. In brief, there are around 100,000 spazas, 50,000 kasi fast food outlets, 500,000 table top & roving hawkers, 50,000 hair salons, 100,000 muti sellers, not to mention taverns, caterers, taxi owners and drivers, builders, electricians, kasi bakeries, etc etc.  And many of these employ three to five staff, who also feel the impact. Not to mention more than R30 billion in spaza and backroom rental incomes to township homes.

Kasi businesses are saying they have no choice and are returning to work en masse. Members of my township network said that “township and informal businesses are at level 1 and suburbs and cities at level 4”. I have pictures to prove this from the survey: upholsterers out on the street, hair salons open, shisanyamas operating from backyards and selling through the front fence, car washes open and so on. On weekends, yard parties are becoming common.

This sector doesn’t just want the lockdown to end, they have ended it, they have no choice. When livelihoods are at risk, people ignore health protocols or restrictions en masse. While the same is starting to happen outside of the kasi, the reality is it is still furtive and limited. In the townships it’s not so furtive to put it mildly, and its almost like the police and army have thrown their arms into the air.

The large immigrant community in South Africa which has fuelled a massive money transfer economy sending money home to Zimbabwe, Malawi, Mozambique, Somalia etc is also highly impacted by lockdown, in both the informal sector where many are street traders, and in the formal sector working as waiters, gardeners etc. These immigrants receive no social grants or any other relief beyond the odd food parcel, and these are certainly just returning to work in any way they can. For them it is not a choice.

Across the board all informal businesses report that even when they reopen, people have no money to spend, or have a lot less and turnovers are down. In the spaza sector for example turnover is down by between 20% and 30%.

In both formal and informal retail sectors consumers are buying what they call “essentials” and there is a strong growth in these. These essentials are staples such as rice, bread, pasta, flour, maize meal, sugar. Outside of these essentials, shoppers are buying few luxuries as money is tight. “Bum-fences” are common – these are lines of people leaning into community centres’ palisade fences with their bums outside, to get the free Wi-Fi on their phones as airtime has run out and is expensive.

In all the surveys fear is pervasive, but at the same time the ability to prevent infection is not easy in rural areas and urban townships.

“Zola and Mofolo clinics closed last week because of the coronavirus, it’s here now, its scary.”

Masks are now ubiquitous in townships and rural areas, even among children in rural areas. The same cannot be said about social distancing at grant queues, at funerals, clinics (queues outside) and public transport. Distancing protocols are observed in the home or township suburb only.

“No ceremonies happening. I am also stuck because I am a Sangoma and I have to perform rituals for people, but I am suspended to do that, even amathwasa have to be returned home but we can’t. Funerals are continuing because is not something which is planned to happen but there are less people compare to other times.”

“Funerals are happening because death comes unplanned. But people still sit together to drink umqombothi and we will all die if it gets here.”

“We don’t have any gatherings except for funerals, clinics and pension days. Stokvels are communicated by phones. Kids will fall behind at school.”

And public transport a real issue in many aspects, especially in rural areas.

“Cars are scarce, and they are available early in the morning and afternoon only. Due to scarce cars sometimes, you find that they became too full and sometimes less full. Van drivers don’t provide sanitisers.”

To be or not to be locked down

As much as there is fear and a general acceptance of the dangers of corona, the realities of life outside the home in rural areas and townships are realities hard to mitigate, whether these are public clinics, social grant queues, funerals or public transport.

In the end there are two camps: on the one side, the social grant recipients with the luxury of incomes, and afraid to lose their additional grants when lockdown ends; and the other side, the economically active without the luxury of choice, unable to survive without ending lockdown and so returning to work. A sentiment shared by those in the formal sector fearing their jobs will be gone when it ends and wanting to return to work.