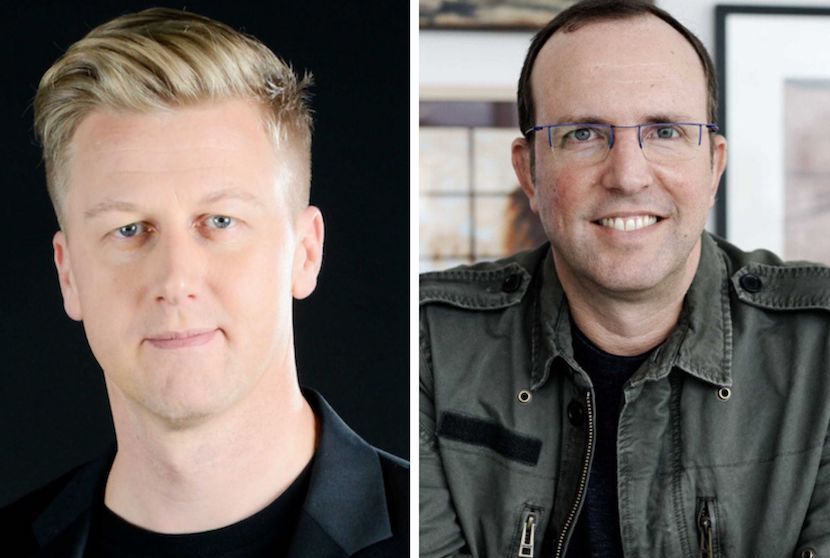 Mike Abel, co-founder and CEO of the M&C Saatchi Group of companies operating in Africa, has taken to Facebook to appeal to President Cyril Ramaphosa and his team to rethink the Covid-19 lockdown restrictions. His move follows media personality and entrepreneur Gareth Cliff, whose open letter to CR has a similar message. Their ideas resonate with many South Africans, who initially embraced the cautious stance taken by South Africa to contain the spread of Covid-19. But strange rules, from limited exercise hours to the prohibition on cigarette sales, are taking their toll on people who are just as worried about their livelihoods as their health and sanity. – Jackie Cameron

An open letter to Ministers Dlamini-Zuma, Patel and Cele

I write this letter as a committed patriot and someone exponentially more concerned about the plight of the poor, than about myself.

Sadly some will deliberately choose to judge this letter based purely on the fact that I am a 53 year old, white male who has done quite well in business.

The first two I clearly had no choice in, and the last, through nothing other than extremely hard work throughout my 30 year career.

It’s an unfortunate and deeply sad reality that I need to write this paragraph above, but anyone remotely au fait with social media in South Africa, knows the huge prejudice that still comes with the demographics of whomever the author is – yet none of their proven behaviour, actions and bona fides.

So, let me now get to the purpose of this letter, and I ask for the basic right for it to be received as intended – from someone extremely worried about our country and her people. Especially our poorest.

This lockdown had only one purpose. To keep people at home whilst our health services prepared for an onslaught of what this virus may bring in terms of illness and death.

I urge you to reread this purpose because it seems to have been forgotten along the way. Whether deliberately or not, is unclear. But as my mom taught me “behaviour is truth” and yours is now speaking volumes.

We did not go into a 3 + 2 week lockdown for it to be extended beyond that point, but just in a different guise. We went into it with the agreement of giving our health services time to prepare. No more. No less.

And yet here we find ourselves, somehow being treated like naughty children and yourselves being our self-appointed parents. You have determined what we can and can’t buy, you have threatened taking us back to Level 5 if we don’t behave and you have overreached in terms of your controls.

Any successful democracy relies on a compact of trust between the Government and its citizens. Before Covid, there was very little of this…

The country had endured over 10 years of State Capture and as yet, not one of its perpetrators have gone to jail, yet an entire nation volunteered immediately for lockdown.

Throughout these 10 years, you all protected Jacob Zuma, 100% through every single vote of no confidence to stop this State Capture that has seen over R1 trillion stolen out of our economy, and has led to unprecedented levels of crumbling infrastructure, decimated SOE’s and crushing unemployment. All your jobs I may add, as Cabinet Ministers and high ranking officials of the ANC NEC.

And yet this virus, and the State of Disaster has somehow given you a sense of moral authority and absolution? Not so. Not remotely. All it has given you is the right to collaborate with the citizens of this democracy to “flatten the curve” over a 5 week period.

As of yesterday, according to Dr Mkhize, we had an infection rate of 0.01% in South Africa of which 98.1% of those infected, are currently surviving this virus.

Now, I am not saying this virus cannot be deadly. It certainly can be if you look at the actual (not inaccurate and far higher) projected numbers.

Many, many people have tragically died. 239,000 so far globally (116 people in South Africa). 3.3 million people have had the virus of which 1.05 million are currently on the recovered list. These are the facts.

Now we have only one question to ask. The only reason behind the lockdown.

Has our health department successfully used the 5 weeks of lockdown (at a cost of R tens of billions daily to our country and resulting in millions of further unemployment) to prepare for the possible onslaught on Covid-19? And that is in addition to the plane-full of Cuban doctors you have brought here?

You have told us what we are and aren’t allowed to buy. Just yesterday a friend of mine was told to put a bra he bought his teenage daughter back on the shelf as it was not approved for purchase. Unfettered E-commerce is the easiest way to have people stay at home and get stuff, but for some illogical and unfathomable reason, you have constrained it too?

Our esteemed Finance Minister (whom I greatly respect) has confessed he supported the freeing up of alcohol and legal cigarette sales, but lost the argument. Even after our President said cigarettes would be available (I am not a smoker nor are any of my family) you overruled him. Why? What was your motive Minister Dlamini-Zuma?

As regards exercise from 6-9am: another illogical decision. 50% of that time is in darkness as we approach winter. So instead of thinning the herd over 10 hours of daylight, to enable social distancing, you have shoehorned the country into 90 minutes and then you get angry when there are inevitably big crowds. And of course people, as individuals, will congregate on the popular walking and running spots as that is where they would naturally and automatically go. These outcomes are directly as a result of the confines and constraints you have deliberately imposed.

Now, I have stated time and time again that I fully supported the 5 week lockdown. I have been one of President Ramaphosa’s greatest cheerleaders, I fully support Dr Mkhize and Professor Karim and their teams in trying to curb this virus. But let’s not confuse this as an opportunity to change your compact with the citizens of a Democratic South Africa. You are not the “ruling party”, but an elected party answerable to the citizens, as governed by our Constitution 🇿🇦

I had great admiration for the giants of the ANC and the moral authority they truly had. The sad passing of Denis Goldberg this past week reminds us. Govan Mbeki, Walter Sisulu, Oliver Tambo, Ahmed Kathrada, Nelson Mandela, Chris Hani, Joe Slovo, Albie Sachs and many others. They held this authority.

You need to use this moment to rebuilt trust in the party through impeccable behaviour. Through listening to the citizenry and understanding realities. Through keeping an open mind. Through being approachable and caring.

We are not your naughty children. In fact, quite the reverse. It is us who have paid our taxes and tried our level best to keep the wheels of our country turning over the years the Zupta forces tried to loot it blind. It is you who have to regain our trust – not vice versa.

I am desperate for the poorest of our country. They need to return to work so that the horror of poverty and starvation doesn’t dramatically eclipse the potential death toll of Covid. At this rate we may indeed end up with both – as opposed to one.

In closing, I repeat, this 5 week lockdown was purely to give our health services time to prepare. No more. No less. Understand that fact and work with us to create the best situation, not the worst. 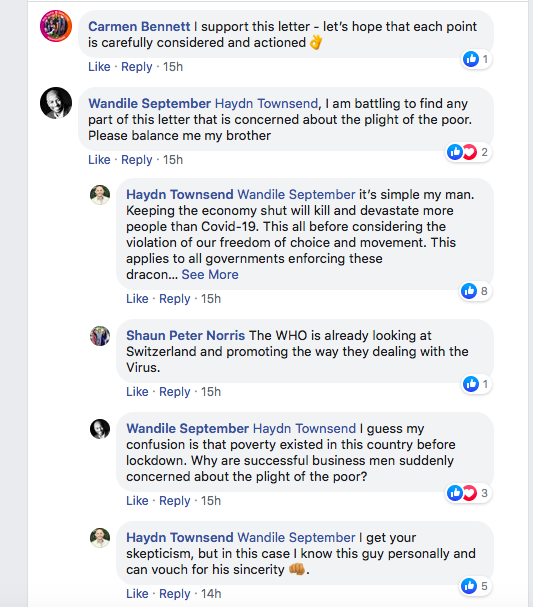 I’m going to keep this brief, because I know you’re dealing with a lot.

We’ve all been ready to support you and your administration in your efforts to save lives from this pandemic. Even people like me, who have questioned the idea of a lockdown as the best response have decided to comply and do whatever we could to help. We set aside our concerns over the heavy-handedness of the police and army; we swallowed and accepted that poor people in informal housing would be crammed into their one-room dwellings for a month; we limited our trips to the shops and even accepted not being able to buy hot food (for whatever inexplicable reason).

When you couldn’t put your mask on we laughed and we were charmed to see that you were able to laugh at yourself too. For a time you won everyone over again. You yourself have said that it has taken much for people to give up their liberties, their right to be with family and friends and the ability to move freely around. Our patience and emotional state of affairs are on a knife-edge. We are losing hope.

Governments walk a fine line in times like these, where the regulations not only have to make sense, but also have to have significant buy-in from the public – otherwise people will break them, in big ways and small. South Africans are mostly compliant – but when you promise something and then break that promise, it makes us feel like we should break your regulations in return.

Many of us aren’t afraid of the virus anymore. It’s our health and we’ll take our chances, thank you. We ARE afraid of the havoc your lockdown is wreaking on the economy, on people’s lives and livelihoods. I see fewer and fewer explanations from ministers and more and more capricious, some would say spiteful, regulation. I’m not a smoker – I don’t like cigarettes at all – but when Minister Dlamini-Zuma announced that she was (after a consultation none of us believe happened) going to keep the ban on tobacco products in place, many of us (even the non-smokers) were ready to give her the middle finger – and start risking breaking the rules. There are more of us than there are police officers and soldiers, so if you piss enough people off, things get very hairy. I’m sure those advisers in the security cluster have mentioned that they can’t shoot us all or put us all in jail.

Your government, Sir, have not covered themselves in glory over the last 10 years. Some people in this country already have a taste of anarchy, where municipalities are bankrupt and there is no service delivery. They see no evidence that the ANC will fix parastatals, cronyism, kleptocracy and for once and for all cease their childish flirtation with outdated and failed socialist ideas. Your hold on power depends on people willing to comply with the rules – the same rules they expect you to comply with. Our patience grows thin, and in tandem your tax collection runs dry. When you speak of a social compact, it goes both ways. You have to take your boot off our throats.

When Moses told Pharaoh to let his people go, Pharaoh didn’t listen and there were plagues. We all know how that story went for Pharaoh. You have to start letting our people go Mr President, or this plague will be the least of our worries. Even Moses could tell you that. 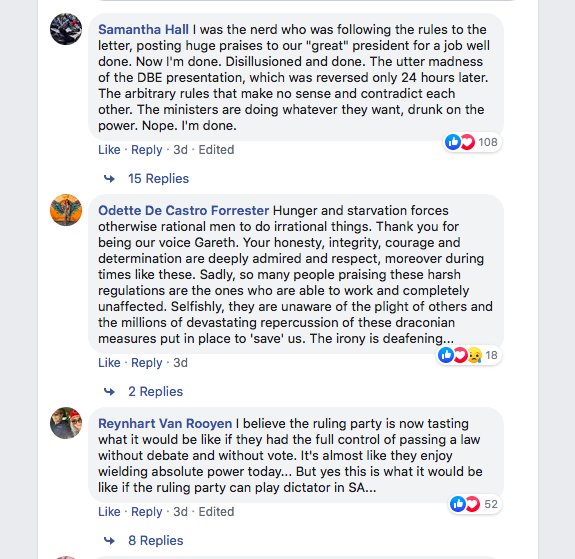