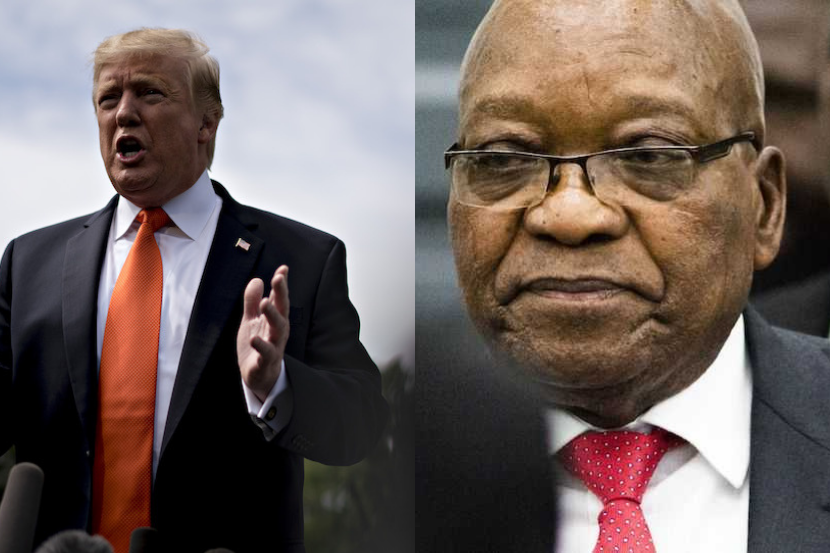 ‘I’m left wondering how it is that cops stood around and watched Jacob Zuma commit contempt by walking out of the Zondo Commission’, said a bewildered Paul O’Sullivan. This bewilderment is shared by many South Africans, who are constantly astounded by Former President Jacob Zuma, and the cavalier disregard he holds for the law. For years, the former president has dodged punishment for myriad crimes. ‘Zuma and his family aligned themselves to the Gupta family, which stands accused of orchestrating the capture of the state for personal profit’, writes Roger Southall, an emeritus Professor in Sociology at Wits University. Across the pond in the US, Trump finds himself in a similar boat. ‘The analogies with Trump might seem distant. But they aren’t. Both men stand accused of subverting democratic processes and institutions they were duly elected to protect. They swore an oath to do so’. This article was first published on The Conversation. – Jarryd Neves

Presidents who subvert democracies they vowed to protect can hit a brick wall: ask Jacob Zuma

By Roger Southall, University of the Witwatersrand*

It can be tough when you are a former president in a democracy you have attempted to subvert, especially when that democracy comes back to bite you. Former South African president Jacob Zuma is finding this out the hard way.

Zuma is holed up in his expansive homestead in Nkandla, KwaZulu-Natal, since being ousted from the presidency in February 2018. His leadership of the governing African National Congress (ANC) ended with the election of his nemesis, Cyril Ramaphosa, in December 2017.

Since then, Zuma (78) has spent his retirement engaged in defensive action to stave off the threat of prosecution for past malfeasance going back two decades.

But he appears to be running out of road on a few fronts. Firstly, he has lost the battle to prevent the National Prosecuting Authority from arraigning him on charges of corruption and racketeering relating to a notorious 1998 arms deal. The deal to equip the military amounted to R30 billion.

Worse may follow. He’s in a tight corner following his refusal to appear before a commission of inquiry into corruption that’s been running since August 2018. The Zondo Commission was set up to hear allegations about grand corruption during his presidency between May 2009 and February 2018.

Zuma has been asked to appear before the commission. He did appear – albeit reluctantly. And then he walked away when confronted with questions he didn’t want to answer.

This decision was taken to the Constitutional Court, where Zuma recently suffered a defeat in his efforts to challenge the constitutionality of having to appear.

He has since said he won’t comply with the court ruling.

He now faces the prospect of being jailed.

Zuma shares this ignominy with his American counterpart, former US president Donald Trump, who, like him, faces legal consequences for his attempts at subverting democracy while in office. Both have demonstrated their contempt for constitutional constraints, using their power as president to destroy institutions of state.

Going to jail for subverting democracy is less than edifying. In Zuma’s case it would be a particularly ignominious final chapter of his life. He has been in jail before, but for reasons that were noble, alongside extraordinary men and women who fought for freedom.

He served 10 years at the Robben Island Maximum Security Prison, from 1963 to 1973, for taking part in the sabotage operations of Umkhonto Wesizwe, the military wing of the then banned ANC, against apartheid. He was 21 when he started serving his sentence.

Trump used the presidency to build up his business empire and stave off its mounting debt. Zuma and his family aligned themselves to the Gupta family, which stands accused of orchestrating the capture of the state for personal profit.

Testimony before the Zondo commission has brought fresh claims to light about how he went about this enterprise, and the extent of it. Even for South Africans who have been provided with a mountain of fresh allegations on his malfeasance since he left office, the latest testimony has been shocking. It has included steps he took to turn the intelligence services into his personal instrument and use them to undermine those who opposed him within the ANC.

The analogies with Trump might seem distant. But they aren’t. Both men stand accused of subverting democratic processes and institutions they were duly elected to protect. They swore an oath to do so.

For his part, Trump is preparing to face his impeachment by Congress for inciting the storming of the Capitol by his right-wing supporters in a bid to overturn the outcome of an election he lost. If he were to be successfully impeached, he would lose his presidential pension and be banned from running again for federal office.

The stakes for both Trump and Zuma are high. Both are focused on the future, rather than trying to rescue their reputations in history. Both represent a major threat to democracy.

Zuma will play the game to the final denouement

Oh yes, it can be tough being a former president, but make no mistake, Zuma will play the game in the way he know best, by subordinating the law to politics.

Zuma is skilled at playing the victim, reckoning that his best defence is to rally support within the ANC, where he still enjoys support, and raise the political costs of pursuing him through the courts.

He knows well that if he is successfully prosecuted for corruption and sentenced to jail, even if only for a symbolic time, those who backed him during the era of state capture and shared the spoils will fear that the prosecutors will be emboldened to come knocking on their door.

The ANC remains riven with factionalism, and with President Ramaphosa seemingly unable to stamp his authority upon the party, Zuma is likely to play for a political deal which will continue to allow him his freedom, even if he is convicted in court.

For Trump, the impeachment process is only a forerunner of charges likely to be filed by New York State relating to his tax returns, very possibly alleging fraud and criminality.

South Africa’s Constitutional Court rebuke to Zuma in its latest judgment reminds him that no-one, not even the president, is above the law.

The apex court is reminding Zuma that the demand for accountability is at the heart of democracy. The US Democrats’ drive to impeach Trump is restating that same principle: that being a former president should not grant any special privileges.

The message is clear. Democracy demands that both Trump and Zuma be held to account.