Who rules and how they rule, manage people and economies, is cause for deep global concern – but those who create, innovate and invent are the opposite – they’re cause for great delight and optimism. That about sums up Ivo Vegter’s outlook for 2022 in the Daily Friend – which initially invokes depression and a sinking heart – but don’t stop reading; it’s ultimately uplifting and hopeful. From America and the UK’s bumbling leaders to China and Russia’s expansionist ambitions, the world is full of dangerous, cunning, greedy and/or clumsy presidents and prime ministers. Yet it has an equal share of amazingly creative people (a disproportionate number South African-born) – transforming earth and space travel, energy and communication and solving problems and creating stuff in nano seconds, using artificial intelligence. We’re all living longer, (until some despot leader goes too far), healthier and more virus-resistant lives thanks to ground-breaking bio-medical developments, and we have more economic freedom … the list goes on. Pick your view – the glass is either half empty or half full; your happiness quotient probably depends on it. – Chris Bateman

Reasons for optimism in 2022

Every new year, I try to write a piece to remind us (and perhaps reassure myself) of reasons for being satisfied with the present and remaining optimistic for the future. It isn’t always easy.

Reasons to be pessimistic I can recite at length.

Russia will likely invade the Ukraine this year, as Vladimir Putin continues to flex his tsarist ambitions. The North Atlantic Treaty Organisation (NATO) will wag fingers and scold Vlad the Great, but beyond sanctions it will do nothing. And Vlad the Impaler’s territorial hunger will not end with the Ukraine.

China will probably invade Taiwan, taking advantage of the geopolitical instability created by its northern neighbour. Once again, the West will feign outrage, but be unwilling to get into a shooting war over what is essentially a large microchip factory. After all, they might as well buy those chips from Red China. China’s territorial ambitions will not end there, either.

So, on a geopolitical level, the world appears to be getting more dangerous.

In South Africa, someone just waltzed into Parliament and set the joint on fire. Nobody cared enough to make sure the place was guarded, or that the sprinkler system worked.

All economic indicators continue to point in the wrong direction. Unemployment is unsustainably high, and still rising. The number of working municipalities is dwindling. The number of functional SOEs is at or near zero. Government debt to GDP has turned exponential.

President Cyril Ramaphosa’s new dawn has been a damp squib; as I wrote days after his installation as president: ‘Cyril Ramaphosa will not be South Africa’s saviour. He will lead it further into the mire of socialism. It is easy to oppose evil that blatantly appears to be evil. Even a child can do that. The far more dangerous evil is that committed by a person who is intelligent and well-educated, who appears well-meaning, and who expresses his intentions with charm and charisma. That, in essence, is the difference between Jacob Zuma and Cyril Ramaphosa.’

As expected, he had neither the political strength, nor the appetite, for sweeping action against corruption. A few scapegoats will be hanged in the town square, perhaps, but the majority of the ANC will march on – hopefully to defeat at the hands of the electorate.

In the third quarter of last year, GDP was the same as it was in the first quarter of 2016, meaning that in the last five and a half years, South Africa has achieved zero GDP growth.

Yet inflation is higher than it was before the pandemic, at 5.5%. Food inflation runs even higher. The fuel price is astronomical, having broken the R20/litre barrier. Electricity tariffs are going through the roof, while 2021 was the worst year for blackouts yet.

South Africa has one of the highest tax burdens in Africa and in the world, which is why nobody wants to invest here, and people with the ability to do so are fleeing the country in droves.

Those of us who aren’t leaving are getting poorer.

Business confidence has been dismal since 2008, and although it has recovered from the lockdown lows, it remains at about half of what it was at the height of the Mbeki era.

Consumer confidence likewise has recovered from its pandemic dip, but remains negative. After a brief spike of excitement when Saint Cyril became our daddy, consumer confidence has returned to levels last seen in the darkest days of the Zuma administration.

Violent protest and lawlessness is on the rise; the police powerless against it. Trust in the government is at an all-time low.

Worldwide, central banks are printing more money than ever before, and government officials are shocked (shocked!) that inflation is no longer confined to pushing up the value of the properties and stocks that they own, but is starting to run out of control in consumer prices, too. (Buy Bitcoin, if you’re not shocked.)

The rampant crony-capitalism of the green technology sector is making vast new fortunes for investors, but at the cost of spiralling energy prices for consumers.

Meanwhile, popular movements are pushing to redirect trillions into futile efforts to modify the climate, instead of allowing poor countries to get prosperous so they can pay for weatherproofing just like rich countries do.

Politically, both the left and the right are getting more radical.

A new generation with no memory of the deadly legacy of socialism is openly calling for a new era of socialism, and clamouring for governments to save us from everything from bad language to bad weather.

A new generation with no memory of the catastrophic consequences of xenophobia and protectionism is calling for a new era of right-wing nationalism, and clamouring for governments to save us from everything from hard-working immigrants to hard-working foreigners.

The choice the younger generation offers us is not one of freedom versus tyranny, it’s which tyranny you prefer.

Nowhere is this political divide more clear than in the idiocracy that elected first a clown and then a dotard to its highest office. Who’s next? Oprah Winfrey? Alex Jones? Alexandria Ocasio-Cortez? Marjorie Taylor Greene? Dr. Oz? Milo Yiannopoulos? Ken Ham? The ghost of Bernie Sanders?

This is the country that invented jazz and where people fly to space for fun, but they cannot find a remotely competent and respectable person to place in high office.

And I haven’t even scratched the surface of reasons to be pessimistic. At least being pessimistic can be good for you.

Yet, while the future looks bleak, it probably isn’t. There are many reasons to remain optimistic, even in the face of inevitable setbacks.

Out of the pandemic comes the first reason: mRNA vaccines. These things are awesome.

Vaccines were already among the wonders of 20th century medicine. Along with antibiotics, sanitation and clean drinking water, they have been instrumental in the dramatic decline in death and suffering from infectious disease, and save millions of lives every year.

Now, the idea that you can simply script a vaccine to produce whatever proteins you want, is ground-breaking. Instead of taking months or years to develop, this technology reduces the speed of vaccine development to days or hours. Already, the platform is being turned towards previously intractable diseases such as rabies, influenza, malaria, Zika, HIV and cancer.

This will revolutionise preventative healthcare in the 21st century, albeit only for the smart people who are in favour of preventing disease. I expect there’s a Nobel Prize in it, probably for Katalin Karikó and Drew Weissman (and not for Robert Malone).

More broadly, genetic engineering is earning a place in the sun. Gene therapy is already proving to be successful in treating a range of diseases, and the ability to edit genes will change everything, forever.

Even more broadly than biotechnology, the march of technology has not slowed down, as many had feared as Moore’s Law begins to reach its physical limits. Just the other day, we witnessed the launch of a long-delayed, heavily over-budget new space telescope. It is a glorious piece of engineering that promises amazing insights and will dethrone Hubble as the desktop wallpaper-maker of choice.

Elon Musk, for all his obnoxious personality, is doing amazing things at SpaceX, finally revitalising a sector that has been unproductive and mismanaged by governments since the end of the Apollo programme.

The promise of a commercial space industry, ranging from tourism to scientific research to exploration to mining extraterrestrial resources, is huge.

Musk is also in the vanguard – although followed by many competitors – in the electric vehicle market, which will, eventually, revolutionise transport for all of us, and have spin-off benefits for an all-electric future.

The internet really came to the party during the pandemic, dragging reluctant technophobes into the brave new world of video conferencing and instant messaging.

The early internet was also a shitshow of walled gardens, animated gifs, unencrypted network connections, viruses and trojans. Somehow, smart people tamed it and made it work for everyone.

Ubiquitous computing power, ubiquitous high-speed connectivity, ever-evolving artificial intelligence, and robotics, while scary at times, will continue to change our lives, as the internet and smartphones have done in only a few short decades.

Up until the pandemic broke out, economic freedom was, on average, rising in the world: 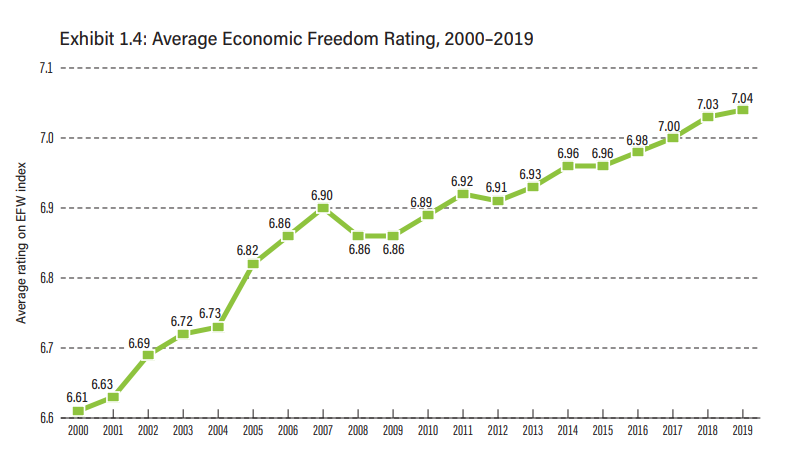 There will undoubtedly be a dip as a result of the draconian lockdowns, but the long-term trend should revert to the mean in due course.

The reason this is important is that economic freedom correlates strongly – and I believe causally – with a host of indicators of wellbeing, including higher income per capita, a higher income share for the poor, a higher nominal income level for the poor, lower poverty rates, improved life expectancy, reduced infant mortality rates, higher school enrolment, a higher score on the UN World Happiness Index, better gender equality, and improved environmental performance.

Although the UN’s Intergovernmental Panel on Climate Change persists with its apocalyptic warnings, its most scary predictions are also the most unlikely. Contrary to the alarming images in the news, natural disasters used to be far more deadly than they are today: 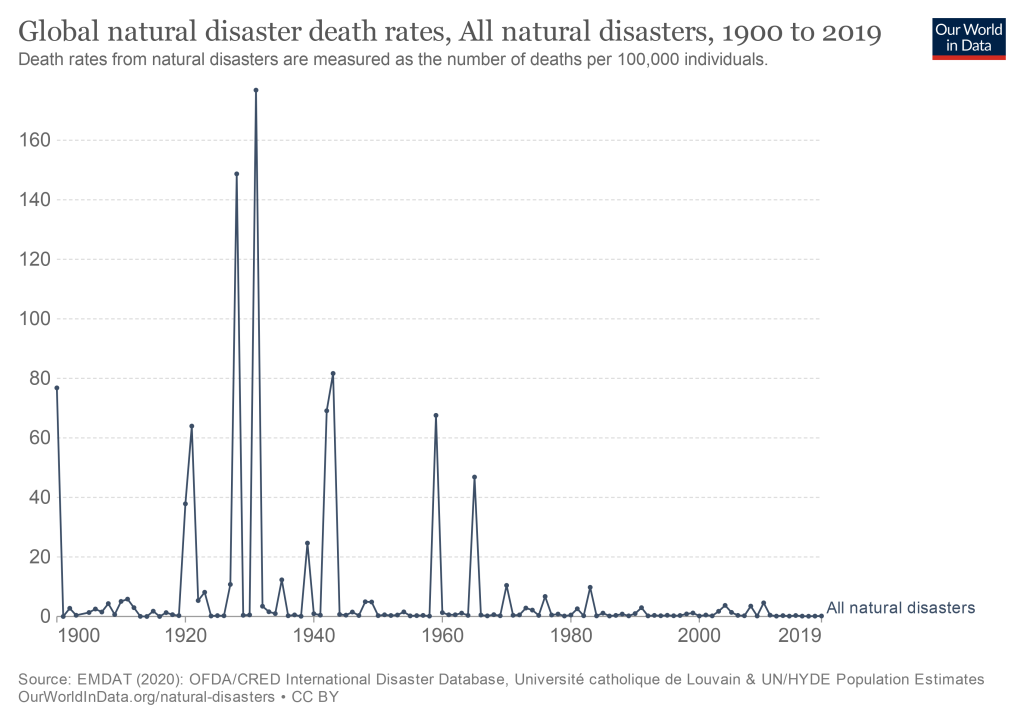 That economic freedom is on the rise is also good news for the climate. In contrast with government-led top-down control (such as the measures imposed to deal with Covid-19), free markets are the best and fastest way to address the challenges posed by a changing climate.

And although the nuclear fission industry has been hamstrung by irrational public fears and dishonest but successful lobbying by its competitors both in fossil fuels and renewable energy, there is growing excitement about, and investment in, nuclear fusion, which – if successful – will be transformational for both civilisation and the environment.

Thanks to the pandemic, global death rates have increased, and thanks to the lockdowns imposed in a vain attempt to slow the pandemic down, half a billion people have been thrust into extreme poverty. This is a great tragedy. However, the pandemic response did not kill the poverty-eradication project. It merely set it back by a decade or so. It need not be a long-term catastrophe, unless we accede to a ‘new normal’ of socialist redistribution, or a Great Reset.

Although things might look grim, today’s circumstances are not uniquely dreadful. In fact, they remain better than living conditions have been for the vast majority of human history.

If we steadfastly continue to advocate for private and secure technology, public accountability, classically liberal political principles and free markets, the long arc of human development will continue to make the world a better place.