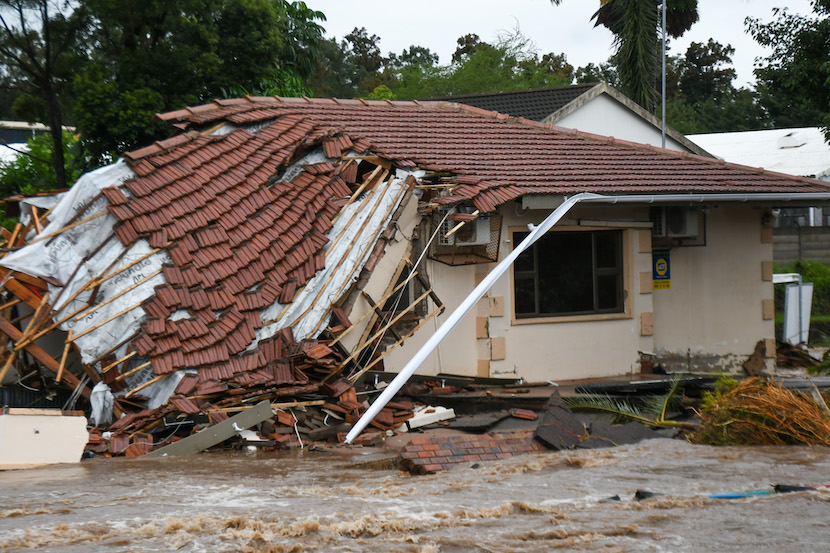 Sara Gon’s out-of-the-box thinking is as refreshing and unadorned as her writing here in the Daily Friend. We have a government – most acutely corrupt and dysfunctional in eThekwini – that thrives on hubris. Perhaps this was best illustrated by a shocked President Cyril Ramaphosa blaming climate change during his tour of the tragic sites of drowning, wash aways and destruction caused by the recent floods, Gon unequivocally says the 400 deaths were the consequence of poor planning, long-ignored infrastructural maintenance and repairs, building houses on completely unsuitable ground, mixed with high levels of corruption. In other words, the causes were human, not climatological. But here is where it gets really interesting: she relates a cautionary tale where the city of Galveston confidently ignored meteorological warnings, believing themselves invulnerable. They lost nearly a third of their population. Ethekwini Metro have flat out ignored lesser but fatal weather events for six years. Where there is hubris, death destruction and debris are sure to follow. – Chris Bateman

Quite by accident I came across a review of a book about an historic event, which, I confess, I’d never heard about before.

The title of the book is Isaac’s Storm, written by non-fiction author Erik Larson. He has written about the last crossing of the Lusitania, the realisation of the Chicago World’s Fair in 1873, America’s gun control debate, and other subjects.

The only Larson book I have read is the remarkable In the Garden of the Beasts. The book is about an American diplomat and his family’s witness to the rise and power of Adolf Hitler. It is a fascinating description of the period from a unique perspective. I highly recommend it.

This piece, however, covers a very different subject and is particularly apt in the context of the devastating floods in KwaZulu-Natal.

The devastation of the flood waters and the deaths of over 400 people were a consequence of poor planning, long-ignored infrastructural maintenance and repairs, building houses on completely unsuitable ground, mixed with high levels of corruption. In other words, the causes were human, not climatological.

It is often mentioned that extreme events are increasing in frequency. I can’t comment on the accuracy of that, but it’s well established that the consequences of such disasters virtually worldwide are much smaller than earlier because the events are better predicted and proper precautions are taken.

Larson’s book that creates a certain perspective on this is called Isaac’s Storm. Here’s a summary.

Isaac Cline was one of the new men at the dawn of the twentieth century. Cline was a scientist who believed he knew all there was to know about the motion of clouds and the behaviour of storms. The idea that a hurricane could damage the city of Galveston, Texas, where he was based, was to him preposterous, ‘an absurd delusion’. It was 1900 and nothing in nature could damage the gleaming city of Galveston, then a place that seemed destined to become the New York of the Gulf.

In 1891, Cline wrote an article in the Galveston Daily News in which he gave his official meteorological opinion that the thought of a hurricane ever doing any serious harm to Galveston was a crazy idea. Many residents had called for a ‘seawall’ to protect the city, but Cline’s statement helped to prevent its construction.

Galveston is a coastal resort city and port off the south-east Texas coast on Galveston Island and Pelican Island. The first settlement came into existence in 1816 at the behest of a French pirate.

In August 1900, a strange, prolonged heat wave gripped America and killed scores of people in New York and Chicago. Odd things happened elsewhere: a plague of crickets engulfed Waco, Texas; the Bering Glacier in Alaska began to shrink; rain fell on Galveston with greater intensity than anyone could remember; immense thunderstorms fell over Dakar, Senegal, and great currents of wind converged.

A wave of atmospheric turbulence moved from the coast of western Africa. Most such waves faded quickly, but this one did not.

America was overconfident about the Weather Bureau’s obsession with controlling hurricane forecasts. Cuba’s indigenous weathermen, however, had pioneered hurricane science. As the bureau’s forecasters assured the nation that all was calm in the Caribbean, Cuba’s own weathermen fretted about ominous signs in the sky. A curious stillness gripped Antigua. Only a few unlucky sea captains discovered that the storm had achieved an intensity no man alive had ever experienced.

In Galveston, reassured by Cline’s belief that no hurricane could seriously damage the city, there was celebration. Children played in the rising water. Hundreds of people gathered at the beach to marvel at the fantastically tall waves and gorgeous pink sky, until the surf began ripping the city’s beachfront apart.

Within the next few hours, Galveston would endure a hurricane that to this day remains the nation’s deadliest natural disaster. In Galveston alone at least 6,000 people, possibly as many as 10,000, died; a greater number than the combined death toll of the Johnstown flood of 1889 and the 1906 San Francisco earthquake. A census conducted three months before the tragedy gave the figure of 33,789 for the population of Galveston.

Cline’s wife Cora, who was pregnant with their fourth child, perished in the storm.

“Ultimately, however, it is the story of what can happen when human arrogance meets nature’s last great uncontrollable force. As such, Isaac’s Storm carries a warning for our time,” according to Amazon’s blurb on the book.

Hubris is one of the great renewable resources.