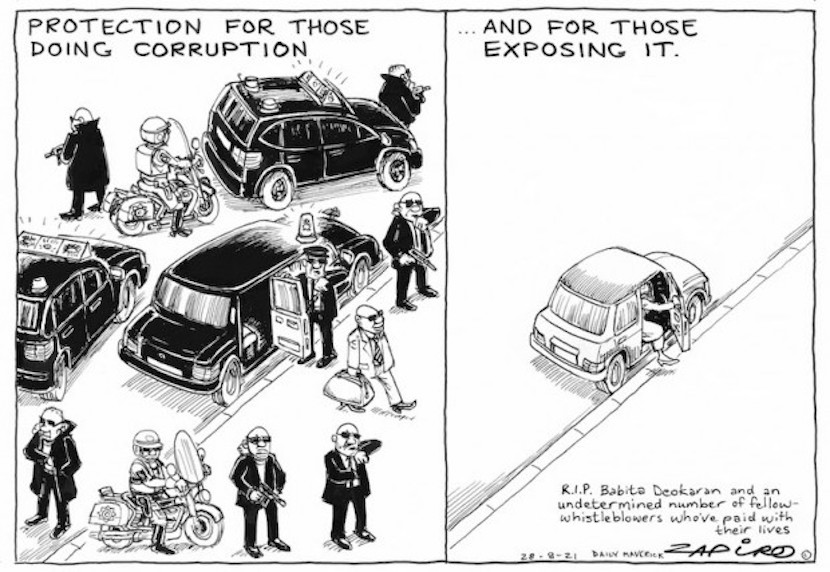 Tragically killed, Babita Deokaran will be remembered for her bravery and dedication to exposing corruption and deceit involving Covid-19 funding. Her story, tragically cut short, is one shared with many whistleblowers. Those who put themselves in danger to speak the truth, whistleblowing is a risky and life-changing task to undertake. Just ask Bianca Goodson who had her life turned upside down. Mosilo Mothepu, once the CEO of Trillian, likened being a whistleblower to being a leper. ” I feel that corporate SA – even today as I speak to you – treated me like a leper and built this fortified wall against me and them.” Below, Chuck Stephens writes about whistleblowers and what they go through – and shares his very own experience.

In praise of whistleblowers

Think Aleksandr Solzhenitsyn.  His memory is so faded now that even my spell-checker can’t help me. But he must be the patron saint of whistleblowers, from the Gulag Archipelago. An archipelago is a chain of islands caused by conflicting ocean currents usually at the mouth of a river where fresh water flows into the sea. There is this clash of waters from two directions – one salty, one fresh – and the chain of islands that he wrote about were detention camps across Siberia. He got to know them by being there.

His incredible memory allowed him during his periods of relative freedom to record the stories of those who were detained in the camps with him. His stories leaked out of the Soviet Union during the Cold War. According to the New York Times, his “stubborn, lonely and combative literary struggles gained the force of prophecy as he revealed the heavy afflictions of Soviet Communism in some of the most powerful works of the 20th century.” He won a Nobel Prize for Literature in 1970, long before the Berlin Wall collapsed. He deserves some of the credit for the collapse of that regime.

He was a victim of a cruel system – telling his own story – and recording the stories of other victims.  He was a whistleblower par excellence. He became a “defector”. This is a special, premiere class of whistleblower. Defectors actually escape the horrors of the system that they expose, as happened recently when an athlete from Belarus defected to the Ukraine during the 2021 Olympic Games. This is still going on, even though the Cold War is over.

One defector of note was Fezekile Ntsukela Kuzwayo – better known as Khwezi.  She defected to Holland to escape the wrath of Jacob Zuma and his protégés. While in the Netherlands, she wrote an extremely powerful poem that she showcased called “I am Khanga”. It is therapeutic for victims to tell their stories. Keeping it in can be hazardous to your health. But I digress.

Whistle-blowing and defecting took a new turn with Watergate. Up until then, the good guys and the bad guys were always dressed in white and black – and easy to keep track of.  Suddenly a President was the bad guy, and “deep-throat” was the good guy – brought to you by investigative journalists, the new heroes. “Deep-throat” is a cynical name for whistleblowers who have to remain anonymous. They are not cowards, they are realists. They contact the media and NGOs. That’s what Babita Deokaran did. She contacted the Helen Suzman Foundation and alerted them to the danger that she was in for reporting corruption involving Covid-19 funding. That is the last step before defection, but she waited too long. The system closed in on her.

We long to hear that the police are investigating her murder. That takes us back to the good old days of the Cold War, when the police were good and the criminal syndicates and the KGB (read: SSA) were bad. Sorry to disillusion you folks, but these days, her murder could well have been carried out by the police or SSA operatives. Remember that we live in the era when civil unrest can be instigated by factions of political parties, on a scale that boggles the mind. The other faction even calls it “insurrection”.

This is not a conflict between two political parties, as in civil war.  This is in-fighting between two factions of one political party. Because for all intents and purposes we live in a one-party state. The god-child of Communism. The other parties have no hope of ever defeating the ruling party, they are simply decoys to make people believe that there is Democracy. When the ruling party is more powerful than the State, wake up and smell the bacon. Democracy is an illusion, and the police and the SSA can and will be used to silence opposition. In this context, whistle-blowing is as risky as it was for Solzhenitsyn.

South Africa’s investigative journalists cannot go unmentioned. There are many, but a few come to mind. Jacques Pauw wrote The President’s Keepers, echoing the famous book about Watergate – All the President’s Men. In this book he exposed the extent of State Capture under Jacob Zuma. Only the Zondo Commission has out-done him in this respect. Pieter-Louis Myburgh wrote The Gangster State, about Ace Magashule.

So far, no one has dared to publish a book exposing the extent of David Mabuza’s indiscretions, because his rise to Deputy President was a chilling reminder of reality. In 2011, our NGO ran a poster campaign in Mpumalanga. The poster had a photo of Jimmy Mohlala, one of those who lost his life in the January Murders between 1998 and 2011.  There were seventeen in all who were shot over that period, fourteen of whom died.  There was an investigation in 2011 – its report is still under wraps.

In July 2021, Mabuza is in a trial prosecuted by Fred Daniel, who has sued his Mpumalanga government for R1 billion. The trial has been allocated 37 days by the Pretoria High Court. So in tandem to Zuma and Magashule, who are currently tangled in court cases, Mabuza is also getting his day in court – although by private prosecution.

I am a whistleblower from Mpumalanga. I know the ways of State-induced injustice. My life is in constant danger. In June, I was arrested. Two months and three court appearances later, I have still not seen the charge sheet. That was incidental. The thing is, they already had 13 men detained in the White River jail, several of them exhibiting Covid symptoms. The police knew this, because these Mozambican border-jumpers had been detained for over a month in the jail. What an opportunity!

They arrested me on a Friday afternoon. The law says that a detainee must be heard within 48 hours, but on a weekend this gets extended by a third night.  They refused to take a statement from me. They just threw me in jail for three days and nights. I caught Covid. I am 70 years old – go figure the risks and probabilities. I have a Covid-positive test to prove it. But I survived this attempt on my life. Brought to you by the police and the instigators. The same weekend that I spent in jail, President Ramaphosa raised the Alert Level from 3 to 4 because the third wave of Covid was upon us.  The police did not miss their chance to take me out. If it was not intentional, it was certainly reckless. Attempted murder, by law. But the authorities close ranks to protect one another. Think Aleksandr Solzhenitsyn.