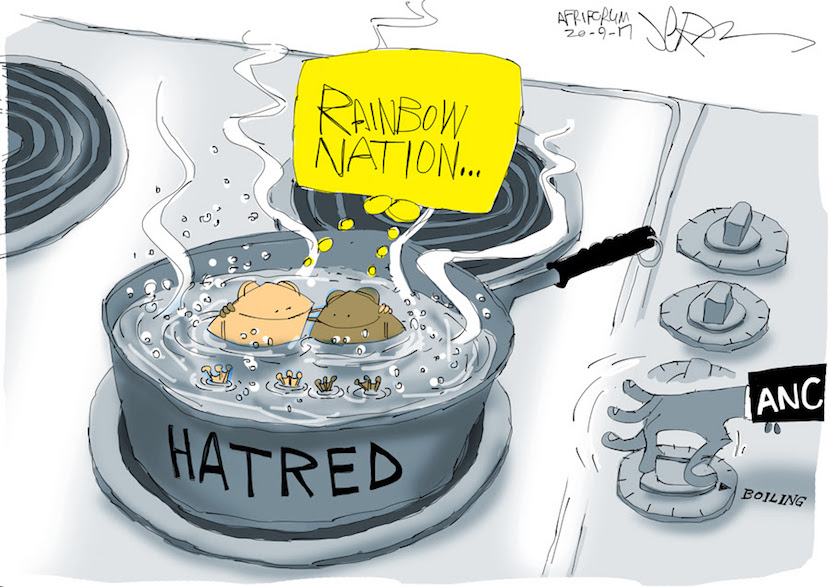 Opining on the Gareth Cliff-facilitated radio debate between One South Africa Movement’s Mudzuli Rakhivhane and DA leader John Steenhuisen, the IRR, it seems, is likening SA’s anti-racism protagonists to modern-day anti-vaxxers. Both lobbies are highly vocal and take the spotlight, yet in truth, surveys on both issues reveal very few South Africans have racism as a top-of-mind issue and only a minority are stout anti-vaxxers. The vast majority want politicians to address service delivery, corruption, job creation and education. And yet, and yet … Nando’s withdrew its sponsorship of Gareth Cliff’s ‘Burning Platform’ radio show because he repeatedly over-rode Rakhivhane when she expressed her lived experience of racism. The net effect was that Steenhuisen’s party view that any vote for an independent candidate is a wasted one got the upper hand. Cliff is nothing if not unapologetic, but he’s probably alienated even more black people than before by not letting Rakhivane be fully heard. This story appeared in the Daily Friend. – Chris Bateman

‘Don’t chicken out of the race debate’ – IRR

Allowing the ‘tiny minority who see racism everywhere’ to command trending attention in the South African debate will mean that the ANC government ‘will continue to diverge from the self-described priorities of most people’, the Institute of Race Relations (IRR) has warned.

In a statement yesterday, the IRR said the evidence was ‘overwhelming that South Africans do not, in the main, believe racism is currently a particularly serious crisis, or that poverty is currently imposed by white supremacists. These are facts that few in the brand and information industries are eager to face’.

‘The major crisis is unemployment, currently 34% on the narrow definition, whose contemporary source is not widespread racism. Over 70% of people wish to work together across racial lines, according to the IRR’s 2020 field survey of ordinary South Africans, and a higher proportion would like people to be appointed to jobs on merit.

‘Moreover, according to the same poll, over 70% think more jobs and better education will cause racial divisions to disappear. Only 3% think racism should be a priority for government to tackle.

‘Unemployment, and failures in housing, service delivery, water and sanitation, poverty relief, infrastructure, and education (cumulatively identified by over 50% as major problems) are caused by the corrupt application of taxpayer funds, government policy that is hostile to investment-driven job creation, and schools that fail to properly prepare the great majority of young people for gainful employment.’

The IRR warned that, ‘in the week before an election that may see South Africa’s governing party, the enforcer of these destructive policies, lose its majority grip, there will be vested interests with a motivation to deny this reality and supplant it instead with the view that this country’s contemporary problems are directly caused by racism and not by the policies of the ruling alliance’.

The Institute added: ‘Third parties should be cautious of endorsing this view in order to be seen as popular because the implications of doing so will be to promote a false narrative and thereby delay the reforms ordinary South Africans need if the plight of the poor and marginalised is ever to be addressed.’

The finding in the 2020 field survey that 80% of all black respondents said they had not ‘personally experienced any form of racism over the past five years’, was ‘good news’ and should ‘be emphasized in the pursuit of a democratic system of accountability that serves most people’s interests’.

Warned Crouse: ‘If the tiny minority who see racism everywhere continue to trend the course of debate, the South African government will continue to diverge from the self-described priorities of most people.’