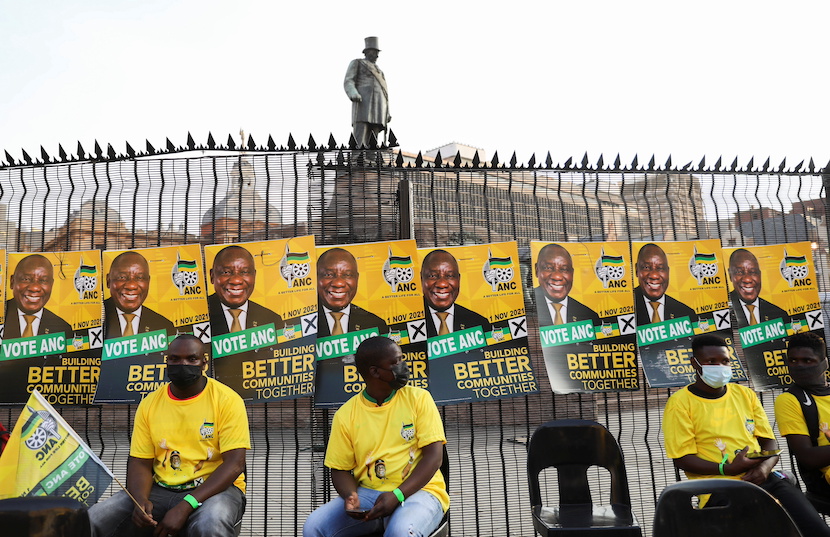 Doggedly refusing to course correct when the results of your policies visibly fail to create ‘a better life for all’ is the hallmark of defunct parties and collapsed economies throughout history. Here Terence Corrigan, project manager at the Institute of Race Relations, adds his voice to the string of analysts on these pages recently, all of whom seem to agree the ideology-bound ANC’s dramatically waning support and refusal to change direction will eventually lead to it losing its grip on power, allowing a slow recovery to begin. Things will, however, continue to slide until after the next election, hopefully being halted before we collapse into a failed state. As always, the dark defines the light, in this case the torch being carried by interest groups, business and civil society. The fall from the moral high ground, which the ANC once occupied, is swift when, as Corrigan puts it, a party is “consumed by incompetence and venality”. – Chris Bateman

The events of the past weeks have demonstrated that a political realignment in South Africa is possible, even probable, and quite conceivably inevitable.

The moment at which the ANC ‘loses its majority’ – a discussion point since the 1990s, and perpetually something looming in the next election, or the election after that one – has now come. The ANC has by no means been routed, but the reverses it has suffered will not soon or easily be recovered from, if indeed they can be.

This may well be remembered as a historical inflection point.

History, however, does not always run in a straight line. A given event represents the accumulated consequences of a specific array of antecedents. Had any of these been different, the circumstances of the present would equally be so. Likewise, what any point in the future will hold will depend on the choices made and trajectories followed in the interim.

On that subject, it’s important to note that a good part of what has brought the ANC and South Africa to this point is the former’s dogged ideological certainty. The ANC revelled in a sense of its own moral elevation, even as incompetence and venality consumed it. It pushed race-based empowerment and restrictive labour policy even as it became apparent that these sat uncomfortably alongside aspirations for growth and empowerment. It proclaimed the centrality of the state to South Africa’s developmental prospects, even as it gutted its capacity through politicisation and corruption.

The decay that has set in

Each of these positions – their contradictions and real-world outcomes notwithstanding – arose from something central to the ANC’s belief system. This helps explain why the ANC could not change course and could not deal with the decay that has set in. To do so would be to surrender that which makes the ANC what it is.

It is precisely this that brought President Ramaphosa to the Zondo Commission to issue a plaintive defence of cadre deployment. It should also have served as final confirmation that no reforms to substantively improve governance or to spur growth are coming.

Indeed, as at this writing, South Africa is about two weeks away from placing an amendment to the Constitution before the National Assembly. This is, of course, the amendment to Section 25. It is a central plank of the Expropriation without Compensation agenda.

At its root, this is about expanding the powers of the state to intrude into the property rights, and the assets, of South Africa’s people.

Understand what this has meant so far: it has sent a very damaging message about South Africa’s economic direction. This was the sense of President Ramaphosa’s investment envoys, one of whom said that explaining the issue was ‘a bigger challenge than what we thought’. This was a masterly understatement, for there is little that disincentivises investment quite like an assault on property rights.

The EWC drive has been a choice made by the ruling party and the government it controls. It is implausible that this has been done with anything other than a recognition of the costs these choices carry, yet they continue.

So when the constitutional amendment comes before the National Assembly on 7 December, do not expect any change of direction. It may be stopped through the opposition or machinations of other parties, but not, one fears, through a change of direction on the part of the ANC.

Whatever the past few weeks may herald for the country’s future, the immediate future promises more of what afflicts the country now. The costs of this are high, and rise higher every day. Recently, the Eunomix consultancy warned that South Africa was in danger of losing its middle-income status. South Africa is a country falling behind its peers, and failing its people.

So, even as South Africa glimpses prospects of policy change and course correction, it must do so with a clear eye on the dangers that will continue for the foreseeable future. The choices made in recent years have brought the country to the present impasse; the choices made in the years ahead will contribute to the kind of future that awaits us.

That future needs those who care about it to fight for it – be they in business, among interest groups or civil society. This would be a true inflection point.