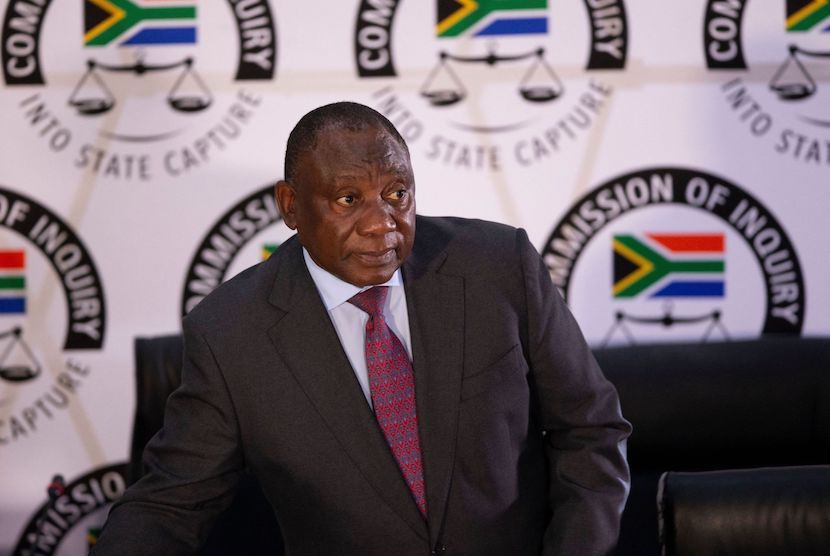 President Cyril Ramaphosa lied to the State Capture Inquiry while testifying and must be charged with perjury. So believes the Democratic Alliance, which after scouring through three years of minutes from the ANC’s Cadre Deployment Committee, found evidence it was actively involved in the recommendation of judges to key positions including the Constitutional Court. DA Shadow Minister for Public Service and Administration, Dr Leon Schreiber, says despite Ramaphosa’s outright denial this ever took place, minutes of the shadowy committee from March 2019 paint a different picture. – Michael Appel

The president of the ANC and of country, Cyril Ramaphosa, clearly misled the Zondo Commission when he testified about the reach, extent and influence of the ANC Cadre Deployment Committee. The reason we can say this is because in those minutes we got hold of earlier this month, it’s very clear, unambiguous that the ANC’s Deployment Committee – which Ramaphosa chaired prior to 2018 – does discuss which judges should be so-called deployed to which positions; and goes as far as to specifically recommend individual names of judges to fill positions. The minutes also show influence in Chapter Nine institutions, government departments and state-owned entities. But what is particularly important at this stage is Ramaphosa explicitly denied before the commission that the Deployment Committee considers [judicial] appointments. He was very explicit that there was no discussion about who should be appointed, who would be a good judge, who would not. And that is the part we’re taking issue with because clearly he would have been aware this is an untruthful statement.

Ramaphosa’s testimony at the Zondo Commission is that he was intent on trying to downplay and spin the ANC Deployment Committee’s influence as something benign; that it doesn’t really have any influence. This particular statement is part of a bigger pattern where he, in my view, sought to mislead South Africans about the extent to which cadre deployment has infiltrated every aspect of the public sector. It’s extremely concerning that the president not only seemingly chose to defend ANC cadre deployment rather than come out with the truth in the interest of the country, but also that he – despite having clearly received advice during the break at the commission – still decided to make a blatantly misleading statement.

On what the minutes of the Cadre Deployment Committee tell us:

Broader analysis of the three years of minutes we obtained, covering the period from May 2018 until May 2021, shows influence in 88 different state institutions. These range from courts and Chapter 9 institutions like the Human Rights Commission, all the way through to government departments. In this particular meeting we are discussing now, in March 2019, the Minister of Justice at the time, Michael Masutha, made a presentation, apparently at the Deployment Committee meeting. There was a discussion and a decision to recommend two judges for the Constitutional Court, where there were two vacancies – another position in the Supreme Court of Appeal, one position in the Labour Court, and a position in the Northern Cape and Eastern Cape divisions of the High Court. Interestingly, those minutes go on to express a view of the committee seemingly saying the judiciary has too much power and that the judiciary has to be brought under bigger control by the ANC seems to be the message there.

On the ANC creating a parallel appointment process:

What you see through cadre deployment is the creation of a parallel appointment process. One unlike the legal appointment process, that is not legally defined and where there is no transparency. It took us 27 years to get these minutes for the first time and it shows it operates according to the personal opinions, views and considerations of loyalty to the ANC rather than to the country. That is precisely our concern with cadre deployment. It entirely subverts the constitutionally defined appointment processes, the norms and standards, and values and principles that are supposed to apply to public administration. That is why we are very firm that this practice has to be declared unconstitutional. Eventually, we have to outlaw it.

On just how powerful the ANC’s Cadre Deployment Committee is:

The president had to explain why he appointed members to the Presidential Advisory Council on state-owned enterprises without consulting the Cadre Deployment Committee. The president was very eager to apologise and say it was due to time pressure that he had to make an appointment, which is his legal right, vested in his power as the president. It’s not power vested in the ANC’s Deployment Committee. The fact that he can be made to apologise shows you just how strong the influence of this committee is.

On receiving any feedback from the State Capture Inquiry:

We are committed to seeing this fight through to the end, ending cadre deployment and also to holding President Ramaphosa accountable for his role in this. He was the chairperson (of the Cadre Deployment Committee prior to 2018) and without fear or favour, the DA wants to hold any people accountable who played a role in state capture, whether through association with the Guptas or through the Deployment Committee. We will see what the commission says, but I can guarantee this is not the end of the story.