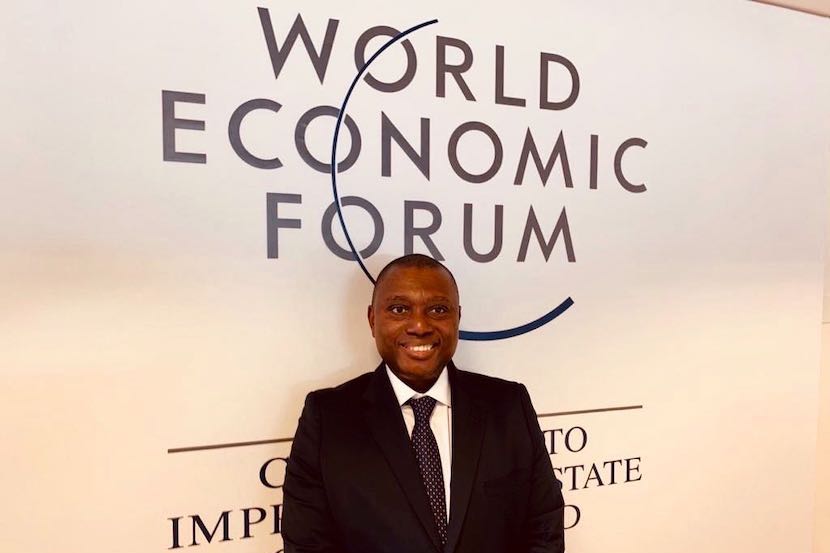 The big tech giants have stolen the lunch of many businesses. The rise of Amazon has closed many a small businesses and has in places like the United Kingdom led to high streets, the former kingdom of businesses, turning into rows of “To let” signs. In the world of banking, the question could very well be asked, is everyone a bank? One of the predictions of Bloomberg for 2020 is that Facebook, Google and Apple could step up fintech ambitions. This is something that the Group CEO of Standard Bank, Sim Tshabalala is well aware of. He spoke to Biznews at the World Economic Forum in Davos about the competition that is looming with digitisation and how he as a self-confessed “left-brainer” has noticed that there appears to be a return to “contemplative traditions”. – Linda van Tilburg

This coverage of the global conversation on change, is brought to you by BrightRock, the first ever needs matched life insurance that changes as your life changes. I’m lucky to catch up with the chief executive of Standard Bank Sim Tshabalala. You’ve been coming here for eight years. Can you tell me what’s different this year?

Good morning Linda. So good to see you. Yes I have been coming here for several years. This year is different because of where the world is – all the major conflicts – you’ve got a simmering conflict in the Middle East, you’ve got protests wherever you go in respect of the environment and even as one drove here from Zurich, there were protests. There’s a sense of people finding their voice and speaking out – people who are marginalised – and I think the imagery of people on the periphery protesting is one that will remain forever in my mind. It is different in the sense though that there are real issues in my view on the table. There’s an open discussion about the contradiction between the carbon footprint. It’s easy to be sanctimonious but often people carrying cell phones organising marches, are using far more electricity in that industry than the airline and the car industry. Davos in that sense, is forcing people to sit back and be reflective. The other point I would like to make in answer to your question is Davos is about social dialogue. It’s about stakeholder capitalism and for the first time – I think it’s been happening before, but I noticed for the first time – the voice of the contemplative traditions, the people of faith. They are here in large numbers and they’re speaking out.

You talked about these green movements that could actually pollute more, the Extinction Rebellion in London had all those protesters walking across Westminster Bridge lighting it up. How contradictory is that?

Yes. So it is important for people to have a voice, but it’s also important to be reflective about that. I often have debates with myself where I say; should I be using a plastic straw or a paper straw? The real thing is you’ve got to grapple, you’ve got to figure out and you’ve got to change your conduct.

Do you think renumeration of CEOs should be linked to how sustainably they run their businesses?

In South Africa – given the structure of the governance system – that is already embedded in the way in which decisions get made. We have to be careful, which is the point I’m making about being reflective. The world is not homogeneous. You’ve got the American tradition which is very markets driven and the role of the company and the role of directors, is to maximise profits in the interest of shareholders. You’ve got the European tradition and indeed I think you’ve got a tradition in South Africa where social issues are important. In Switzerland for example it is illegal to focus only on one sector of your stakeholders, you have to look at all your stakeholders. In South Africa, King has been advocating the stakeholder capitalism notion and that all our work has to be integrated. So when decisions get made, they don’t get made purely on profitability. They get made on the basis of making sure that you look after and remunerate people who have provided you with capital – those taken risk in your company – with returns that are commensurate or better than the risks that you have created. Then you also have to make sure that you are treating your customers fairly and looking after their interests. Likewise your staff. Likewise the environment. So it’s an integrated approach. As I say, it includes your staff your shareholders, your bondholders – in the case of a bank – you’ve got to pay your tax and then indeed your performance relative to the environment. At Standard Bank we’ve got five value drivers and when we get measured, when I get measured, I get measured against all of them which is customer outcomes, customer experience, what are the trends. Secondly, employee engagement – how do our staff feel about the bank? Thirdly, it is conduct and risk. The risks we create and also how we conduct ourselves, how we are treating customers. Fourthly, financial outcomes and importantly, social economic and environmental outcomes. So all five.

You’ve got it in your mission statement?

I saw the other night that you were taking pictures. Do you give that to your staff telling them what you’re doing?

Yes I do because firstly I am very proud to be an employee of Standard Bank and I believe communication is important. I write to them sharing the discussions, the dialogues, the issues that are happening here because that’s important. You’ve got to be transparent as much as you can given the laws of privacy and the obligations you’ve got as an executive.

These digital banks that are growing in South Africa and challenging you, as well as competition between the big banks, What are the challenges for you?

The point of the matter is digitisation or the fourth industrial revolution, it is a big issue here at Davos and we are living it every day in the banking sector because you have got fierce competition between the incumbents – the existing banks – you’ve got new entrants, which have done a remarkable job such as Capitec and Discovery and then you’ve got Fintech that are eating at slivers of the banking system. Small payments and they provide a fantastic service. Then you’ve got the big techs – Google, Amazon, WeChat – who’ve got the capability – their large IT networks and networks of people and access to data. I ask you with tears in my eyes what’s the difference between that and a bank. It’s actually the same thing. The difference with the bank is that the bank has capital and is regulated. So these entities are actually in competition with banks too. So if you then look out into the next 5, 10, 20 years, you have to say as a steward of the bank, what do you do today to ensure that you have left the institution in a better place, still in existence, still competing, still carrying on the traditions of the institution, yet competing in the modern world. For that purpose you have to streamline your IT and reduce your costs. At the same time you’ve got to improve your customer experience and make the customer experience as good as that provided by the Googles, the Amazons and so forth.

Nedbank had to close branches. Is there a danger of that at Standard Bank?

We did too. We had to close a large number of branches early last year for which we incurred the wrath of society in general and our customers in particular, but we have done our best to be candid and explain the rationale and take the feedback as we get it. But even with all the negative feedback, it was the right thing to do given where the institution is at. The world today is changing and I have to ask you this just to illustrate the point. When last did you visit your branch? And I will not ask you which bank you belong to.

I’m a digital person and I don’t go into my bank. I think only when I applied for a mortgage.

That’s my point. So you’ve become digital, however there are people – especially the older people and rural people – who need to have access to our staff and we are figuring out where it’s appropriate to keep branches open and where it’s not. The more sophisticated clients still want to go to branches – often to discuss problems and solutions, as you say you wanted to have a mortgage and probably wanted to talk to somebody about insurance etc. Then you go to a branch and the banks have a duty to make sure that they meet those customer needs. To go back to the fundamental question. It is unavoidable in the Fourth Industrial Revolution because of digitisation. The way clients interface with the service providers changes. To survive we have to meet those needs.

Just one last question. Which of the sessions outside your field of expertise did you find particularly interesting?

It was amazing. I’m often accused of being very left brain. I’m a failed lawyer so I think in terms of process. Whenever I come to Davos I try to break up the meetings between service providers and clients, learning and attending financial services type sessions, but the sessions that I found mind-blowing were two. The one was between religious leaders from all the great contemplative traditions. There was a Muslim, a Hindu, a Buddhist and there was a Christian. They were reflecting on the environment, the role of business and so forth. Then yesterday I attended a talk by the patriarch of Constantinople Rome and he was also speaking about the same thing. The real point around that is that the contemplated traditions are back.