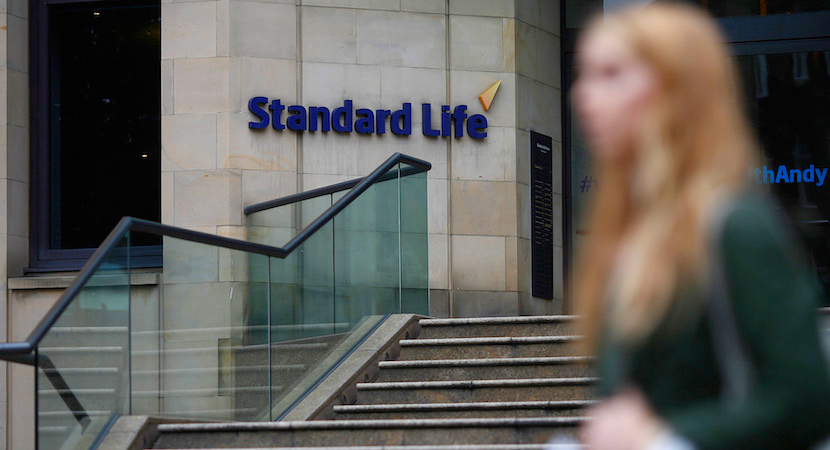 News that Aberdeen Asset Management Plc is in talks with Standard Life to create one of Europe’s biggest fund managers has sent ripples of surprise and concern through Scotland’s financial services community. It is inevitable that, if this £11bn ($13.5bn) merger goes through, jobs will be axed as the two asset managers recalibrate for a business environment in which passive funds have been eating up market share. Aberdeen Asset Management (ADN.L), one of Europe’s largest listed fund managers, is the dog in this deal. It has been haemorrhaging funds over poor investment returns. Standard Life (SL.L) is roughly twice the size at £7.5bn, notes Reuters of a transaction that, if successful, would create Britain’s largest investment manager. Aberdeen Asset Management and Standard Life have been burdened as have all fund management companies across the globe with rising regulatory costs and pressure to lower fees in the face of weak average returns and growing competition from cheaper, index-tracking rivals. These trends have driven industry consolidation. Analysts point to cost-cutting at Aberdeen Asset Management and Standard Life as beneficial for their clients, with job duplication being eliminated to boost cash flow and earnings. The two directly employ about 10,000 people and prop up many service providers in Scotland and elsewhere. The shareholding is likely to reflect market capitalisations, notes the BBC, with Aberdeen shareholders likely to own abut one-third of the bigger group. The deal is subject to approval. – Jackie Cameron

Under the terms of the potential deal, Standard Life shareholders would own 66.7 percent of the combined group, according to a joint statement on Saturday. Aberdeen’s investors would receive 0.757 new Standard Life ordinary share for each share they already own. That values Aberdeen in line with Friday’s market value of 3.77 billion pounds, according to Bloomberg calculations.

Active managers have been working to halt a tide of investors shifting money to low-cost, passive funds and have been cutting costs to protect profitability. Aberdeen, hurt by weaker sentiment toward emerging markets, has had more than three years of redemptions, leading Chief Executive Officer Martin Gilbert to reduce expenses and freeze salaries.

“Aberdeen has been struggling of late,” said Laith Khalaf, a senior analyst at Hargreaves Lansdown Plc. “They have seen a huge number of outflows for a significant period of time so probably a combination with Standard Life will steady that ship somewhat.”

Standard Life is known for its multi-asset strategies, including its flagship GARS fund that manages about 25.1 billion pounds, while Aberdeen is seen as an emerging-market specialist, with about a quarter of its assets invested in the region. Both companies have suffered outflows from those strategies.

Both Gilbert and Standard Life’s CEO Keith Skeoch have said they wanted to grow in the U.S., where most of the world’s assets are managed, as part of efforts to become more global. Standard Life Investments, which has a partnership with John Hancock, currently sells nine products to U.S. investors and oversees about 12.5 billion pounds of assets there.

The potential combination between the two Scottish firms could achieve annual cost savings of 200 million pounds, Sky News reported, without saying where it got the information. Standard Life, based in Edinburgh, employs around 8,335 people and the Aberdeen, Scotland-based asset manager has more than 2,800 workers.

Talks are ongoing and “the potential merger represents an excellent opportunity to leverage Standard Life and Aberdeen’s combined strengths,” according to the firms. The combined company would have a market value of about 11 billion pounds and see Skeoch and Gilbert become co-CEOs and Standard Life’s Gerry Grimstone would become chairman.

A deal would boost revenue, cash flow and earnings that will deliver “attractive and sustainable returns for shareholders, including dividends,” according to the statement. Both Aberdeen and Standard Life’s investment unit reported outflows in 2016 after investors pulled money in the aftermath of Britain’s shock decision to leave the European Union and Donald Trump’s presidential election victory. Aberdeen’s shares have risen 11.3 percent this year and Standard Life is up 1.8 percent.

Gilbert said in May that he had resisted buyer interest saying “being independent is a massive benefit.” The CEO has previously said he wanted to do a deal similar to Henderson Group Plc’s cross-border merger with Janus Capital Group Inc. The firm weighed a bid for Pioneer Global Asset Management and dropped it after saying the price was too high.

Based on Standard Life’s closing share price Friday of 378.50 pence, the deal would offer Aberdeen shareholders about 286.52 apiece, for a total value of about 3.78 billion pounds based on Aberdeen’s 1.32 billion shares outstanding. Standard Life declined to comment on the valuation. The insurer, which has sold off insurance assets to focus on asset management, has a market value of 7.5 billion pounds.