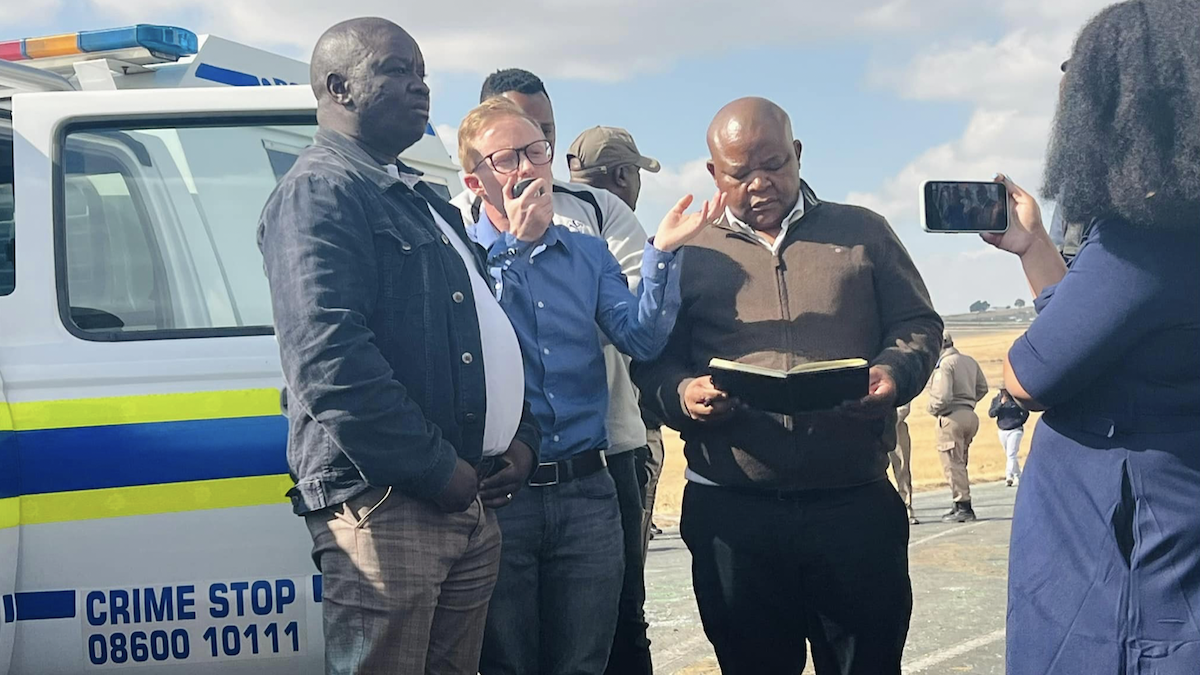 Using a hopelessly inadequate analogy for a hopelessly inadequate ruling party somehow seems appropriate. Veteran observer of SA politics, William Saunderson-Meyer, says the ANC will not ‘walk’ when bowled out in the 2024 national elections. They’ll stand their ground and argue with the umpires and the off-field technology, proceeding to give a demonstration so unsportsmanlike that it will make the Australian ball tampering controversy seem mildly mischievous. The value of this astute piece of writing lies in its prediction of what will probably happen after the ANC loses to an opposition alliance in 2024. Their incremental drop of historic support is a matter of record. Alarmingly so, too, is what ANC opponents of the stellar new DA mayor of Howick have done to disrupt his initiatives. They’ve resorted to mayhem, destruction and death threats to try and continue their 29-run innings. Expect the same elsewhere. A sobering, essential read. Article published first on Politicsweb.- Chris Bateman

Will the ANC walk if given out?

If the African National Congress is finally shown the door by the electorate, will it exit voluntarily? The indications are not promising.

The consensus scenario punted by political commentators is that in the 2024 general election the ANC will lose power nationally. At the provincial level, at a minimum, Gauteng will join Western Cape in sending the ANC packing.

If the ANC were to retain power it would have to strike a coalition deal, most likely with the fascistic black nationalists of the Economic Freedom Fighters. There is also a rosy variation of this scenario that has the “good” ANC splitting off and forming a coalition national government with the likes of the Democratic Alliance, the Inkatha Freedom Party, and minnows like ActionSA and the Patriotic Front.

But post-colonial African history is not on the side of the optimists, needless to say. Nor is the post-1994 South African experience.

When Cape Town and the Western Cape fell to the opposition, in 2006 and 2009, the ANC tried a variety of underhand stratagems to regain power. These were relatively mild and amateurish, probably because these apparently aberrational developments weren’t that threatening to the ANC.

At that stage, the ANC was riding high. It had in 2004, led by President Thabo Mbeki, won a fraction under 70% of the national vote. In the 2009 general election, which ushered in President Jacob Zuma, it was still sitting at a constitution-changing 66%.

In contrast, in 2019 it got 58% and in the 2021 local elections that was down to 46%. That’s desperately disturbing for thousands of ANC apparatchiks — not only councillors but also poorly-qualified cadres deployed to ridiculously well-paid jobs — in local government structures countrywide.

In the badlands of KwaZulu-Natal — that most beautiful province cursed with perpetual turmoil — there’s a case study unfolding on how the ANC in the President Cyril Ramaphosa era responds to the loss of power and patronage. It also provides a potential playbook on how municipalities elsewhere could address the crippling problem of non-payment by residents for power and other services.

Despite its modest size, the Midlands town of Howick has national strategic importance, straddling as it does the N3 highway between Durban port and the country’s economic powerhouse in Gauteng. The highway is a regular target for blockades, as well as the ambushing and torching of trucks, by the Radical Economic Transformation cabal that helped orchestrate last July’s devastating riots in KwaZulu-Natal and Gauteng.

uMngeni also has a psychological significance for the ANC, since it’s the ruling party’s first loss of a KZN municipality to the DA in 28 years. That the loss was by a razor-thin margin serves to strengthen the ANC’s determination to regain control, seemingly in any way possible.

In last November’s polls, the DA unseated the ANC, winning 13 seats and 47% of the vote. The ANC dropped from 55% to 39%, giving it 10 councillors, while the EFF quadrupled its vote to 7%, giving it 2 councillors.

The remarkable win can largely be ascribed to their mayoral candidate, Chris Pappas. Pappas, a gay, white man, would not be the instinctual choice in a predominantly black, semi-rural, socially conservative area, but he is charismatic, a fluent Zulu speaker, and politically astute beyond his relative youth (31).

It was helpful, too, that just days before the election the ANC deputy mayor defected to the DA. The final straw, she explained, was death threats from rivals within the ANC. These are not idle threats in a country that has endured 213 political assassinations in the past seven years, more than half of those in KZN.

Aside from the threat to subsume uMngeni into a larger, ANC-dominated geographic entity, the party’s skullduggery was initially petty and doomed to failure.

The previous municipal manager — suspended after a Special Investigation Unit report implicated her, other staff members, and some councillors, in R20m of Covid-fund embezzlement — tried to preside over the first council meeting, to prevent the appointment of a DA speaker, mayor and deputy mayor. Her ANC-deployed replacement had to be compelled, under threat of a court order, to call the meeting.

Since then, the sabotage has become more overt and confrontational.

This week, a couple of trucks were set alight, roads barricaded and motorists stoned as a small group of Mpophomeni township residents took to the streets of Howick with the encouragement and support of ANC councillors. Eskom contractors’ vans were attacked and tools were stolen.

The ostensible cause for the outburst was the municipality’s refusal to replace an electrical transformer, affecting the supply to about 150 households, which had burnt out because of the overload caused by illegal connections. It said that before spending R150,000 on a transformer that would inevitably suffer the same fate, inspectors would first conduct an electrical meter audit in the area.

ANC elements seized the opportunity to wreak some populist havoc, despite the majority of the households agreeing to the audit. A group of around 20-30 protestors was mobilised — ferried about by ANC councillors who also provided takeaway meals — to unleash intimidatory mayhem in the manner that has worked so well for militants elsewhere in the province and the country.

For once, though, those in authority did not instantaneously fold.

Pappas called for the intervention of the SA Police Service’s Public Order Policing unit to assist the town’s small complement of traffic cops and private security guards. When POPS initially failed to act, he released a statement saying that the municipality would, if necessary, seek a court order: “POP cannot sit idly by and watch the destruction of property and the threats to life,” he wrote.

Pappas met with the protestors twice but refused to negotiate with the mob, telling them to work through their ward structures and councillors. When they gathered at the municipal offices, dressed in ANC regalia, and tried to smash past the gate, POP prevented this from happening.

Unlike other violent incidents, which almost uniformly have no repercussions for the instigators and protagonists, criminal charges are being laid by the municipality. Pappas tells me that there also will be follow-up with police and judicial structures to ensure that the process doesn’t just peter out, as it so often does.

The council has been called from recession to decide on possible disciplinary action against the ANC councillors involved. Pappas will also be laying a complaint against a local religious leader who tried to fan community violence against Pappas personally, as a gay man. Pappas, the first openly gay mayor in South Africa, and likely on the continent too, sleeps under a different roof every night for safety reasons.

For now, things are under control. On Wednesday, as the illegal protests petered out, the audit of the affected houses was completed, the transformer was replaced and the power was restored by nightfall. The message to people is that the municipality will reward law-abiding behaviour but not illegal and/or destructive protests.

But Pappas has no illusions that this is the end of the matter. “They will come again, smarter and better organised. We, too, will have to up our game.”

“This has shown the value of credible, up-to-date intelligence at ground level. We need to be able to respond quickly, despite the town’s limited security capacity, for long enough that the POP — which is under-resourced and thin on the ground — can deploy effectively.”

It has helped, too, that the municipality has the support of a substantial number of the residents on whose behalf the protesters claimed to be acting. To protect poor and vulnerable households, uMngeni already provides those earning under R5,000 per month with R650 of free electricity a month, free rubbish collection (which actually happens) and exempts them from rates.

“Populist decisions by political leaders not to collect legitimate charges are simply unsustainable,” Pappas says. He points out that unpaid electricity and rates charges cost the municipality 40c in every R1 of revenue that it collects, amounting to R85m paid to Eskom annually that it is unable to spend on uMngeni’s pressing other needs.

“We have to be honest with people about what are realistic expectations. We must educate to create a civic-mindedness. For the social contract to work, people need to know not only what their rights are but also their responsibilities.”

The events in uMngeni illustrate in microcosm the double-bind that the ANC is in.

It was the ANC that created the non-payment monster when, in the late 1990s, it blocked Johannesburg Metro, which was under its control, from prosecuting Soweto defaulters on rates and services charges. The upshot has been a protracted and calamitous collapse in municipal infrastructure throughout South Africa.

Post-2021 local elections, new DA-led municipalities are tackling non-compliance vigorously. However, the ANC, with the EFF poised on its left flank, still cannot bring itself to do so.

The governing party’s only remaining course of action is to prevent the DA and other opposition-led structures from succeeding. Expect more “spontaneous” eruptions of violence in these municipalities.

And don’t expect the ANC to walk when it is given out.