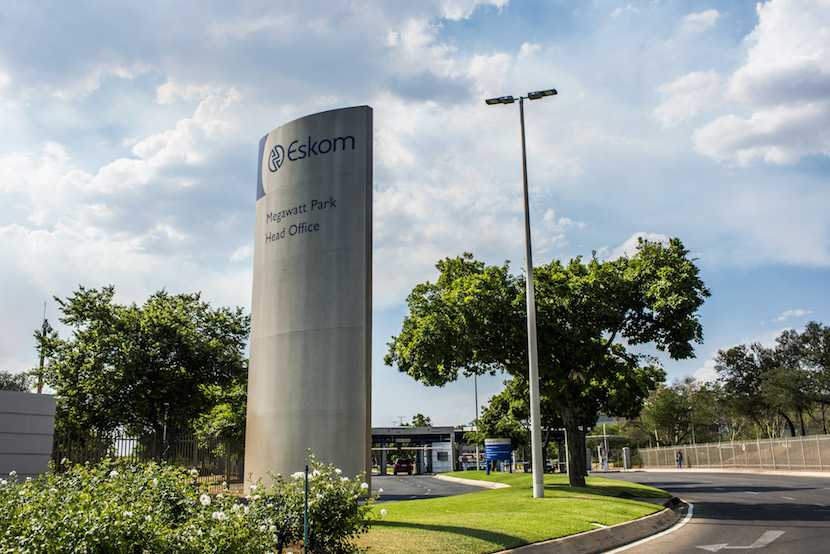 CAPE TOWN — Students of finance ethics would graduate cum-laude were they to successfully unpack the conundrum Eskom faces, perhaps best summed up thus; “can throwing good money after bad ever be redemptive?” Eskom – and the nation, fervently hope that the energy utility will demonstrate that they’re the exception that proves the rule. As with the President Cyril Ramaphosa, Eskom CEO Phakamani Hadebe is showing he’s not that out of kilter with reality. Witness his admission last month that the power utility’s debt had reached R450bn. That’s R80bn short of the figure compiled from public records by Bloomberg; pretty close as comparative estimates go. Loans now account for half of Eskom’s debt, up from 40% a year ago. It’s a nightmarish juggling act for Hadebe. When China Development Bank failed to come to the party earlier this year, he had to take out an urgent R3bn bridge loan from Absa to avoid a call on existing guarantees. Keeping the lights mostly on has never been so hard. Let’s hope Hadebe has a good shrink, sleeps enough hours and surrounds himself with loyal and honest colleagues. Our futures depend on it. – Chris Bateman

Eskom Holdings SOC Ltd.’s debt is approaching R500bn ($35bn), according to data compiled by Bloomberg from public records, including bonds and issued loans, up from about R370bn a year ago. While the utility declined to comment on the current number, its Chief Executive Officer Phakamani Hadebe last month put total debt at about R450bn. 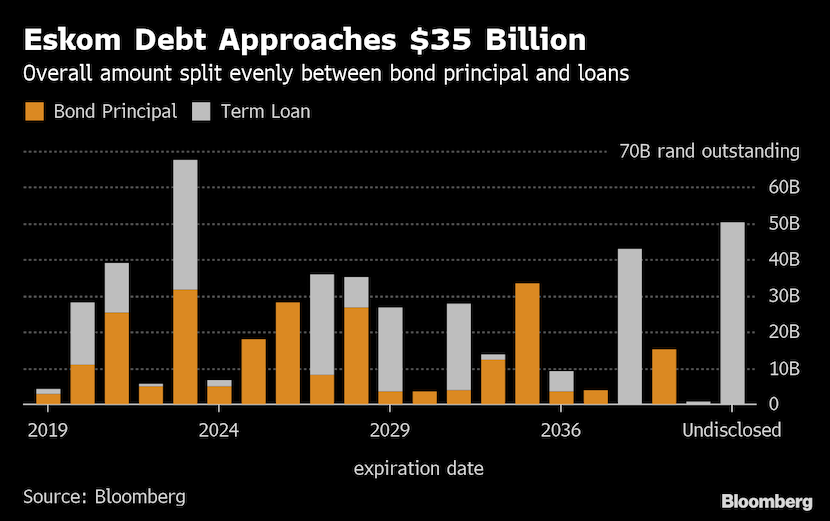 Eskom hasn’t been selling enough power to cover its operating costs and interest payments, and has been forced to implement rotating blackouts over the past few years to prevent a collapse of the national grid as its fleet of ageing and poorly maintained plants struggled to keep pace with demand.

President Cyril Ramaphosa announced plans earlier this year to split the company into three units to make it easier to manage, and the National Treasury allocated a R69bn cash injection over the next three years in the February budget – a bailout that’s already been partly offset by the rising debt.

The restructuring will allow for greater participation by private industry in the electricity industry but there are no plans to privatise Eskom, Ramaphosa said at an investor conference organised by Goldman Sachs in Johannesburg on Wednesday, his first engagement with business since he won a five-year term in May 8 elections.

“Eskom is too big to fail,” he said. “If Eskom fails, this economy fails.”

The composition of the utility’s debt has also changed, with loans accounting for just more than half of its total burden, up from 40% a year ago. The switch to short-term financing hasn’t been smooth sailing – a loan agreed with China Development Bank failed to come through as scheduled earlier this year and Eskom had to take out an urgent R3bn bridge loan from Absa Group Ltd. to avoid a call on existing guarantees.

Not even debt swelling to $35bn fazes Eskom’s bondholders

Even as data showed the state-owned power utility’s debt is approaching $35bn, yields on the company’s dollar bonds ticked lower on Wednesday as investors bet the government would step in to prevent any chance of a default.

“Eskom is too big to fail,” Ramaphosa said at an investor conference organized by Goldman Sachs Group Inc. in Johannesburg, his first engagement with businesses since he won a five-year term in May 8 elections. “If Eskom fails, this economy fails.”

Yields on Eskom’s $1.75bn of 2021 securities dropped three basis points to 6.31%, and are trading well below the average of 7.24% over the past year. The yield is down 14 basis points since May 8, when Ramaphosa’s ruling African National Congress won a majority in parliamentary elections. Rates on dollar bonds due 2023, 2025 and 2028 also declined.