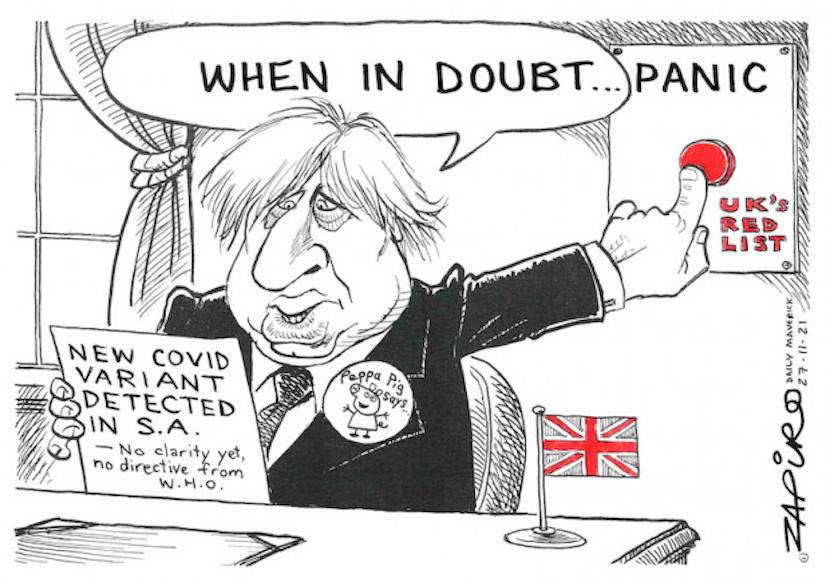 When those tasked by voters to protect and guide them behave like conspiracy theorists, leading to damaging outcomes – and patronise and penalise a former ‘colony’ – it’s easy to realise why movies satirising madcap governments are so popular. I’m referring to Simon Lincoln Reader’s latest contribution parodying Britain’s government on its behaviour, both domestically and towards South Africa, on Omicron. Our government has a dodgy Covid-19 record with some clampdowns like those on beach access and cigarette sales verging on idiocy and nefarious intent, but at least they’re now adapting and listening to our world-renowned scientists. Our medics and researchers are proven global experts on Covid-19 and its variants, yet are being treated as scientifically illiterate by Britain’s public health leaders and government. Right now, for once, SA looks pragmatic and sensible while Her Majesty’s kingdom stumbles around in its Fawlty Towers. Rescinding SA’s national state of emergency when it comes up for renewal this Saturday would further highlight Britain’s paranoia, SLR argues. – Chris Bateman

The pig-headed response to Omicron by Britain’s expert elite alone reveals why millions of people will again vote for Donald Trump in 2024 (and many millions more round the world will support them), why giving liberal arts graduates the power to censor was one of the worst decisions in history and why the liberal establishment is actively encouraging the thing it claims to fear the most, its own execution by a working arrangement between the groups it describes as the far left and the far right.

In 2020, I told you what the mentor of the always-wrong druid Neil Ferguson did to Oxford epidemiologist and Great Barrington signatory, Sunetra Gupta. This idiot – and you’ll forgive me for forgetting his name – spread a rumour that Gupta only got to where she did because of her chequebook. She took him to court and he had to apologise. Later, he resigned from the Wellcome Trust because he was bust moonlighting. I said at the time this was an example of how fraught with rivalry science is. In hindsight, it’s filled with loathing, with people just as easily seduced into corruption as the blackened hearts of Bain and McKinsey.

Two weeks shy of Omicron’s two-month anniversary and the political extensions of Britain’s maths and science elite – and much of the Gates-funded media support – are still refusing to listen to South Africa’s medical professionals, still trying to pressure Boris Johnson’s administration into more restrictions and, ultimately, attempting to augment the state of the permanent emergency. Sadly, Johnson’s subtle defiance has not been as courageous as he’d like you to believe. With a new coof-related or personal scandal erupting almost every week, it’s politically critical for him to appeal to the one group he’s taken for granted: those possessed of increasingly rare common sense.

Chris Whitty was knighted in the now-farcical Queen’s New Year Honours List, alongside a war criminal, yet Whitty’s treatment of parts of the South African medical fraternity – particularly those who discovered Omicron – is nothing short of hostile bad faith. Until November, both Britain and South Africa were generally aligned with the Gates-funded, Imperial College-modelling Public Health-ism response, but Whitty’s instructions not to treat Omicron as less severe have led to the South Africans feeling rightfully aggrieved.

This does two things. The first is obvious: it treats the practitioners on the ground in South Africa [note: not mathematicians] like Gambian witchdoctors. The second is less obvious but more damaging. If the data is clear – which it is and has been – then it prompts curiosity as to the appropriateness of the response, and from there, exactly the thing the expert class has been warning us to avoid from since March 2020: conspiracy theories.

The South African state of emergency – the powers afforded to Nkosazana Dlamini-Zuma that include the authority to lock the country down – expire this Saturday. There is no logical, compelling reason as to why these powers should be renewed. The Johnson administration, a group of cuckolded shysters who have themselves broken rules with impunity, only renewed their equivalent to placate the expert class, most of whom are politicised and should have never been invited to participate in the first place. The idea that Boris Johnson is Britain’s Donald Trump comes straight out of the male sanitary pad dispenser of the UK’s gradually collapsing legacy media; he is Britain’s Joe Biden, which makes him infinitely worse.

South Africa continues to be insulted by Britain. Cyril Ramaphosa’s removal of restrictions in December was telling: for the first time there was a noticeable departure from the Gates-funded, Imperial College-modelling Public Health-ism response and now he must go the full way on Saturday. The chain is broken, this thing is over. The mathematicians with their Fitbits have had their fun. Now voetsek.