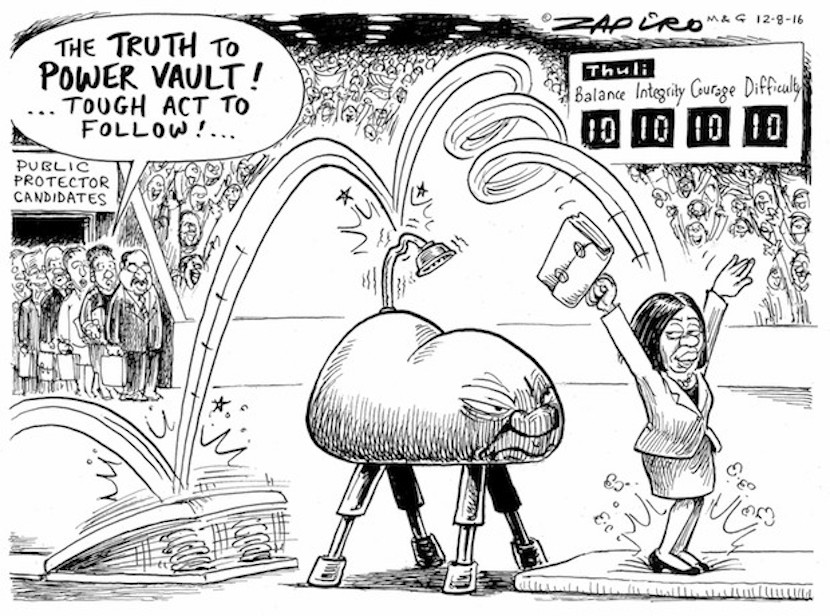 Several South African cabinet ministers are under investigation by Public Protector Thuli Madonsela, who is probing allegations of state capture – the method used by influential politicians and their associates to access taxpayers’ funds through winning contracts and other methods. The outgoing public protector has revealed  in an interview with Fin24 that detailed work is being undertaken to understand the extent of corruption and irregularity, with the probe extending across a group of senior politicians. Allegations are not limited to current contracts and tenders, with funds meant for memorial services to celebrate the life of former president Nelson Mandela also possibly stolen. Madonsela has stood her ground in the face of pressure – ranging from death threats to allegations that she was a spy – to back down on investigative work into the affairs of public officials. She lifted the lid on refurbishments to Nkandla, President Jacob Zuma’s homestead, at taxpayers’ expense. Although Madonsela is changing direction in her career, she has not put her feet up in her final weeks in the Public Protector’s chair. Madonsela says she is determined to press on with wrapping up as much as possible before she steps down. Above all, she is determined to do her bit so that South African leaders are held to account – and live up to Mandela’s ideals. While many might think current allegations of state capture are a sign that South Africa is an economic sinking ship that needs to be abandoned for better prospects elsewhere, Madonsela believes the opposite: this too shall pass. – Jackie Cameron

Johannesburg – Thuli Madonsela was called a CIA spy by a South African deputy minister and received death threats as she pursued politicians in her role as the nation’s graft ombudsman. Now she’s planning a last round of potentially explosive revelations before she steps down next month.

In her sights is what South Africans call “state capture”, a reference to allegations that a wealthy family, the Guptas, used its friendship with President Jacob Zuma for profit and influence.

In one instance, Deputy Finance Minister Mcebisi Jonas said the Guptas offered him the post of finance minister. The controversy around the family prompted the nation’s largest banks to close accounts belonging to companies owned by the Guptas, who are in business with Zuma’s son. Both Zuma and the Guptas deny wrongdoing.

“We are coming in because the investigation alleges that some cabinet members were corruptly appointed, or appointed in a manner where the president allowed the Gupta family, which has business links with his family, to have a say in the appointment of cabinet members,” Madonsela, 53, said in an interview in Pretoria.

She’s also probing allegations that some public funds meant for memorial services to mourn the death of Nelson Mandela in December 2013 were stolen by public officials working with business people. It’s one of about 200 cases she and her investigators want to wrap up before she steps down on October 15.

Named one of Time magazine’s 100 most influential people in 2014, Madonsela has chalked up notable successes during her seven years as public protector.

After her probe of the use of public funds to pay for an upgrade of Zuma’s private home in the village of Nkandla, the ruling African National Congress used its 62% majority in the National Assembly to block parliamentary action against the president. Then, the Constitutional Court ruled that Zuma violated the law by not abiding by her recommendation that he repay some of the money, and ordered him to comply.

Other casualties of her investigations include Police Commissioner Bheki Cele, who Madonsela said broke state procurement rules when he authorised payment for a lease for new police headquarters, and Public Works Minister Gwen Mahlangu-Nkabinde, who Madonsela said failed to cooperate in the lease probe. Both denied wrongdoing, and both were fired.

“She has really elevated the status of the office,” Sanusha Naidu, political analyst at the Pretoria-based Institute for Global Dialogue, said by phone.

“That visibility has also opened what has become an interesting level of understanding among the ordinary people of South Africa about the separation of powers, about the issues of transparency and accountability.”

Along with success have come enemies.

After Deputy Defense Minister Kebby Maphatsoe called her a “CIA agent” targeting the ruling party in 2014. She described the barb as both sad and funny. Then came the text messages threatening her life, with one just two months ago saying, “You are a dead public protector.”

“I didn’t find the death threats humorous,” she said. “I don’t understand why would you still want to kill me. I’m on my way out.”

Her nominated successor, Busisiwe Mkhwebane, a 46-year-old former analyst at the State Security Agency, will probably face increased pressure from the ANC to tone down investigations, said Ralph Mathekga, a political analyst at the Mapungubwe Institute for Strategic Reflection, a Johannesburg-based research group.

“It is a known fact that the ANC prefers a weak public protector,” he said by phone. “That is based on the manner parliament and the ANC dealt with the Nkandla matter, undermining Madonsela’s authority.”

Madonsela said she wants to return to legal practice, has invitations to teach public law at several universities and will start writing her memoirs next year. She previously served on the team that helped draft South Africa’s post-apartheid constitution that Nelson Mandela promulgated in 1996.

The corruption and poor governance she has uncovered is a sign that the current crop of politicians leading South Africa aren’t living up to Mandela’s ideals, Madonsela said. Yet she remains optimistic about South Africa’s democracy, despite the “human failings”, as Zuma demonstrated in the Nkandla scandal.

Isn't it funny that people who are "handled" are required by handlers to try and make the world to believe that others too are handled.

“We are very far away from the brink. I always say this to my friends and the younger ones who are concerned about whether they should invest in a career here,” she said.

“Even when I’m asked to speak to investors, and I speak with conviction, I say we are not on the brink of catastrophe.” – Fin24