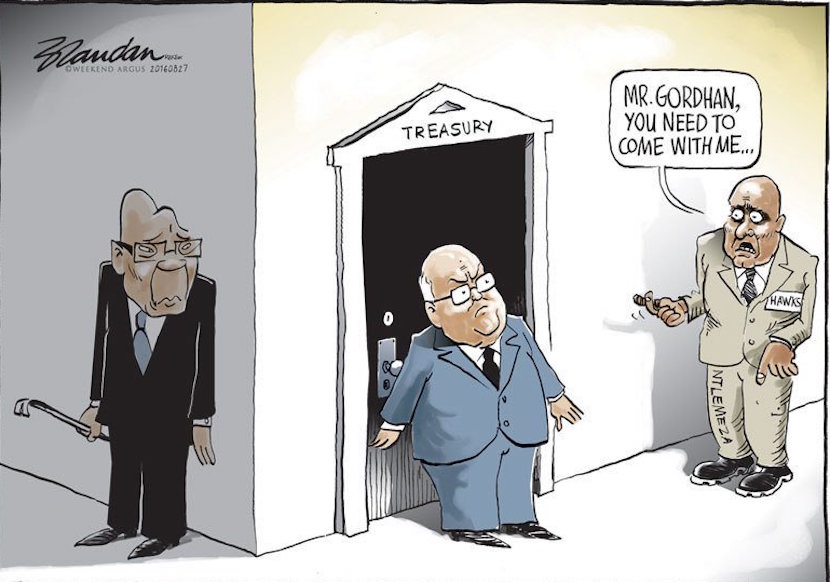 How do you get rid of an African president that is running a country into the ground and won’t leave, even though the people are demanding it? Evidence from around the continent suggests it has to be of his or her own volition. Although President Jacob Zuma has, it seems, been caught with his fingers in the cookie jar – many times – he is impervious to calls to step down. A movement, led by AngloGold Ashanti Chairman Sipho Pityana to Save South Africa, is aiming for “maximum impact” protests over Zuma’s attempt to get Finance Minister Pravin Gordhan out of the way through trumped up crime charges. The leader of the opposition Democratic Alliance, Mmusi Maimane, has tabled a Motion of No Confidence in President Jacob Zuma, to be voted on by the National Assembly before the end of the year. Zuma has many friends in Parliament, so a majority against him will be difficult to achieve. Although Zuma is at the centre of explosive bribery allegations involving his friends the Gupta brothers and other politicians, it is unlikely he is going to be marched away in handcuffs. This is because he has systematically installed his associates in influential roles across state entities, including law enforcement agencies, thus ensuring he has been continually able to wriggle out of allegations of corruption. The best short-term hope is for the ANC to wrestle back control of their party. ANC chief whip Jackson Mthembu is among the ANC leaders to publicly call on Zuma to step down. But with a lot at stake – including the risk of jail – Zuma and his allies are likely to dig in their heels. Save South Africa campaigners may have to wait until 2019, when there is a national election, to wave goodbye to Zuma. – Jackie Cameron

Johannesburg – A campaign by Save South Africa has been flooded with messages of support since making a call for a people’s assembly to discuss state capture.

South Africans have been offering to help the campaign’s demonstrations against state capture in November, one of its steering committee members, Lawson Naidoo, said on Monday.

“We have received numerous phone calls and are in consultation with a number of political parties as well as civil society over a plan of action for November 2,” Naidoo said.

They were charged with fraud for their role in granting Pillay early retirement in 2010, and re-hiring him on a contract later. Gordhan was Sars commissioner between 1999 and 2009.

Many have said the National Prosecuting Authority’s decision to charge the three with fraud was part of a plot to unseat Gordhan as finance minister, due to his attempts to crack down on corruption and maladministration in President Jacob Zuma’s Cabinet.

Founders of the Save South Africa campaign, including AngloGold Ashanti CEO Sipho Pityana and former ministers Trevor Manuel and Barbara Hogan, have described the move as “nothing less than an unbridled attempt at further state capture, and designed to get unfettered access to state resources”.

The Economic Freedom Fighters and the Democratic Alliance have called on their supporters to demonstrate in defence of South Africa’s democracy on November 2.

Save South Africa said in a statement that interested parties, including civil society organisations, trade unions, faith-based bodies, businesses, and foundations had approached it.

The campaign intended to co-ordinate their initiatives on November 2, to ensure it had “maximum impact”.

“This is a crucial moment in our history, and we should use it to demonstrate that we will not allow corruption to continue. The looting must stop. Integrity must rise,” the campaign said. – News24

Johannesburg – Support for Finance Minister Pravin Gordhan is growing as the CEO of the National Employers’ Association of South Africa has thrown his weight behind him as he faces fraud charges.

Earlier this month, the National Prosecuting Authority (NPA) head Shaun Abrahams announced that Gordhan has been ordered to appear before court on a charge related to the early retirement of former deputy commissioner Ivan Pillay.

The announcement sent shockwaves through South Africa’s business community and civil society, with the rand plummeting on the announcement. Legal experts have also questioned the strength of the NPA’s case amid allegations of political interference.

On the weekend, 81 CEOs also pledged their support for Gordhan. And now Papenfus has also expressed support for the minister.

“It is seldom happening that, within the context of a country, so much depends on one man. South Africa finds itself at such a point in its history and you, minister, are that man,” said Papenfus in an open letter of support to Gordhan on Tuesday.

“Minister, thank you for the position you have taken up to form a stronghold against the forces which have no regard for the interests of South Africa, and who are therefore hell-bent on, not only destroying your reputation, but removing you from office, with the clear intention to have unhindered access to our resources.

“As a matter of interest, minister, before submitting this letter to you, we ran the issue of support for you past our circle of influence. Within a couple of days, over 15 000 businesses and individuals have expressed support for you,” said Papenfus.

Apart from NEASA and the business community, ANC members such as Deputy President Cyril Ramaphosa and even the ruling party’s chief whip Jackson Mthembu have declared support for Gordhan.

The calls of support come as Gordhan is set to deliver National Treasury’s medium term budget in Parliament on Wednesday. – Fin24

The depth of the unease in the party was revealed on Sunday when the ANC’s chief whip in Parliament, Jackson Mthembu, said members of the National Executive Committee, including Zuma, 74, and his deputy Cyril Ramaphosa, should all step down from the party’s decision-making body. Unless the ANC changes course, it risks losing power in 2019 general elections, he told Johannesburg’s City Press newspaper.

The public has lost confidence in the ANC “because of factional behavior, because of arrogance, and now, under our watch, a sitting minister is spuriously charged with fraud,” Mthembu, who sits on the NEC, told Johannesburg-based broadcaster eNCA. “Perhaps we are not the leadership that can take the ANC forward.”

Mthembu’s comments signal a deepening crisis in the ANC’s leadership at a time when the government is battling to stave off a credit-rating downgrade to junk. Opposition to Zuma’s leadership has coalesced around Gordhan, who’s clashed with the president over the management of the national tax agency and state companies as well as the affordability of nuclear power plants Zuma wants to build, since being appointed to his post in December.

Prosecutors said this month they planned to charge Gordhan for illegally allowing a tax agency official to retire and be rehired on a temporary contract during a previous stint as finance minister. Opposition parties, analysts and increasing numbers of ANC leaders say the case is a political stitch-up aimed at allowing Zuma to appoint a more pliant head of the National Treasury. Gordhan, who’s due to appear in court on Nov. 2, denies wrongdoing.

Zuma has been able to count on the NEC to shield him from a series of scandals since he became president in 2009, including a Constitutional Court ruling that he violated his oath of office by ignoring a directive by the nation’s graft ombudsman to repay taxpayer funds spent on upgrading his private home. His refusal to quit, coupled with allegations that a wealthy family has wielded influence over his government, known as “state capture,” and a sluggish economy all contributed to the ANC’s worst-ever electoral performance in a local elections in August.

“Mthembu’s comments indicate an unprecedented level of conflict among senior ANC leaders,” Anthony Butler, a politics professor at the University of Cape Town, said by phone.

Calls for Zuma to resign or be fired have also come from Save South Africa, a group that’s led by Sipho Pityana, the chairman of gold producer AngloGold Ashanti Ltd., and backed by former finance minister Trevor Manuel, civil-rights and church groups. It intends staging a protest outside the courthouse in Pretoria, the capital, when Gordhan is due to appear.

“Attacks on National Treasury are nothing less than an unbridled attempt at further state capture and designed to get unfettered access to state resources,” the group said in a statement on Sunday. “We must send a strong message that when our sovereignty is threatened we are able to transcend our differences in defense of the motherland.”

Mthembu declined to comment further when contacted on his mobile phone. ANC spokesman Zizi Kodwa said party leaders were accountable to the branches that elected them and they wouldn’t quit.

There’s little chance the NEC will resign because “it is the sovereign decision-making body of the ANC between leadership conferences and the party has no structure to disband it,” Butler said.

Zuma, whose second term as ANC leader is due to end late next year and his second and final term as president in 2019, has denied intentionally breaking the law.

The Democratic Alliance, the main opposition party, has said it will table a motion of no confidence in Zuma in parliament by the end of the year. The ANC, which controls 62 percent of the seats in parliament, has easily seen off several previous opposition attempts to dismiss the president.

Asked if the ANC would allow its lawmakers to decide how they would vote this time around, Mthembu said: “When the time comes, the ANC will deal with it.”

Despite the rising criticism, Butler still expects the ANC to rally around Zuma and deal with its leadership disputes internally.

“They see whatever strife there is in the party as a family affair that has little, if nothing, to do with anyone else,” he said.