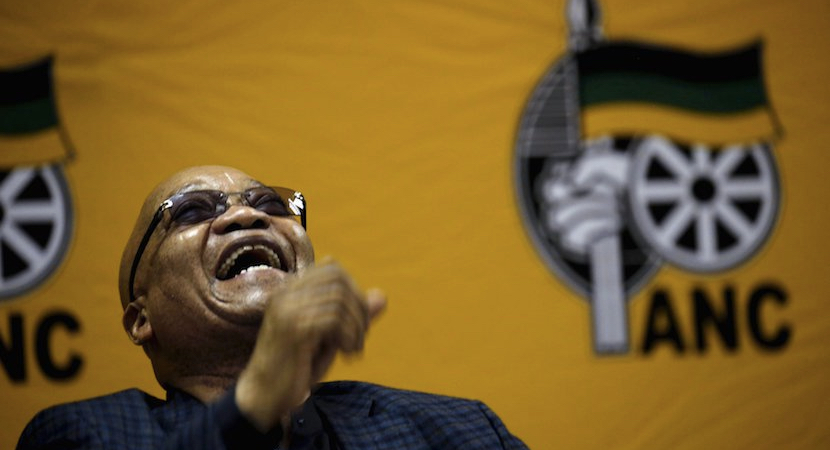 When influential members of your own cabinet ambush you with a surprise call for your resignation, you must feel the pressure – jetting off to Cuba to attend Fidel Castro’s funeral immediately afterwards is probably not the best tactical move. Yet not doing so would be a protocol blunder so extreme (for the ANC), that it would merely add fuel to the fires being stoked by the enemies within. And so our President rolls with the barrage of punches. For journalists keenly watching every tiny development, it’s almost becoming passe to write about the tide of probes, court actions, party machinations and opposition moves threatening to overwhelm Zuma each and every day, week-in and week-out. The mini-revolt in the NEC seemed to be the most significant development in a while, but perhaps we were deceived. It’s within the party structures that Zuma is most effective, using his guerrilla intelligence experience to outwit, outlast and outplay his disaffected comrades. Perhaps the most telling argument is how he’s tactically deployed his ‘’troops,’’ like the chess master he’s reputed to be, so that wherever the attack may come from, the terrain is sealed off, impassable. How long he can keep it up is now the latest game in town… – Chris Bateman

Johannesburg – President Jacob Zuma has survived a gruelling attack on his leadership from within the ANC National Executive Committee.

The “surprise” motion by Tourism minister Derek Hanekom for Zuma to step down or be recalled was defeated.

There was no voting, but more people on Monday spoke for and against the motion. Insiders say Zuma’’s defenders had regrouped, and dominated the speaker’s list.

This was perhaps  Zuma’s toughest political battle since Polokwane in 2007.

He faced a revolt by members of his cabinet including Hannekom, Thulas Nxesi and Aaron Motsoaledi.
Deputy minister Joe Paahla also supported Hanekom’s motion as well as some senior SACP members.

However Zuma’s cabinet is divided with other minister including Maite Nkoana Mashabane, David Mahlobo and Senzeni Zokwana defending him.

A Zuma defender told News 24 that it was gruelling but they had managed to regroup following a poor showing on Saturday.

President Zuma is said to have addressed the NEC following a long list of speakers, with many people wanting their position to be known.

The party is due to hold a press conference tomorrow afternoon at its headquarters. – News24

by Sam Mkokeli and Mike Cohen

(Bloomberg) — South African President  J acob Zuma survived the most serious challenge to his leadership yet, after a contingent of top officials failed to force him from office during a meeting of the ruling party’s National Executive Committee.

The committee, which ended a three-day meeting late Monday, said that the top six members of the ruling African National Congress would discuss Zuma’s fitness to remain president before a consultative conference next year, two members of the committee who were at the meeting said on condition of anonymity. The committee, the most powerful party body between national conferences held every five years, has the power to order Zuma to resign as president of the country, not as leader of the ANC.

#ANCNEC the idea that those opposed to Zuma should resign is reckless. Would be handing the country to more of zuma's corrupt cronies

Zuma’s seven-year tenure as president has been marred by a succession of scandals and policy missteps that have weighed on the rand and put the nation’s investment-grade credit rating at risk. While Zuma, 74, has survived several previous challenges to his leadership, the fact that members of his own cabinet have openly turned against him is the clearest sign yet that his grip on power is slipping. He’s scheduled to step down as the ANC’s leader in December next year and his second term as president ends in 2019.

“Although Zuma lives another day, his power is clearly waning,” Anne Fruhauf, vice president at New York-based risk adviser Teneo Intelligence, said by e-mail. “Investors are concerned that the president may go for broke in the wake of the bruising NEC meeting. A cabinet reshuffle seems almost inevitable.”

Tourism Minister Derek Hanekom on Saturday proposed the motion of no confidence in Zuma. Those also calling for him to step down were Health Minister Aaron Motsoaledi, Public Works Minister Thulas Nxesi, Science and Technology Minister Naledi Pandor, and Jackson Mthembu, the ANC’s chief whip in Parliament, Johannesburg-based broadcaster eNCA reported, without saying where it got the information. A group of ministers threatened to resign at the meeting if Zuma remains in his position, Johannesburg-based Business Day reported, without identifying them or saying where it got the information.

The rebellion within the ANC comes almost a month after the nation’s graft ombudsman released a report indicating that Zuma may have allowed members of a wealthy family, who are his friends and in business with his son, to influence cabinet appointments and the awarding of state contracts. Zuma denies the allegation and is challenging the ombudsman’s findings in court.

In March, the nation’s top court ruled that he violated his oath of office by refusing to repay taxpayer funds spent on upgrading his private home. In August, the ANC suffered its worst electoral performance in a local government vote, losing control of the capital, Pretoria, and the economic hub of Johannesburg.

The rand strengthened the most in almost a month earlier Monday, leading global gains against the dollar, climbing as much as 2.8 percent. It weakened 0.8 percent to 13.8374 per dollar as of 8:07 a.m. in Johannesburg.

South Africa moved closer to a junk credit rating after Fitch Ratings Ltd. on Friday changed the outlook on its assessment to negative from stable and said that continued political instability could result in a downgrade. Political risks to the standards of governance and policy making have increased and will remain high at least until the ANC leadership election in December next year, Fitch said in an e-mailed statement. Moody’s Investors Service left the country’s rating at two levels above non-investment grade.

“The ANC National Executive Committee is no longer insulated or seemingly impenetrable to pressures from the ANC branches and formations in opposition to Zuma,” said Daniel Silke, director of the Political Futures Consultancy in Cape Town.