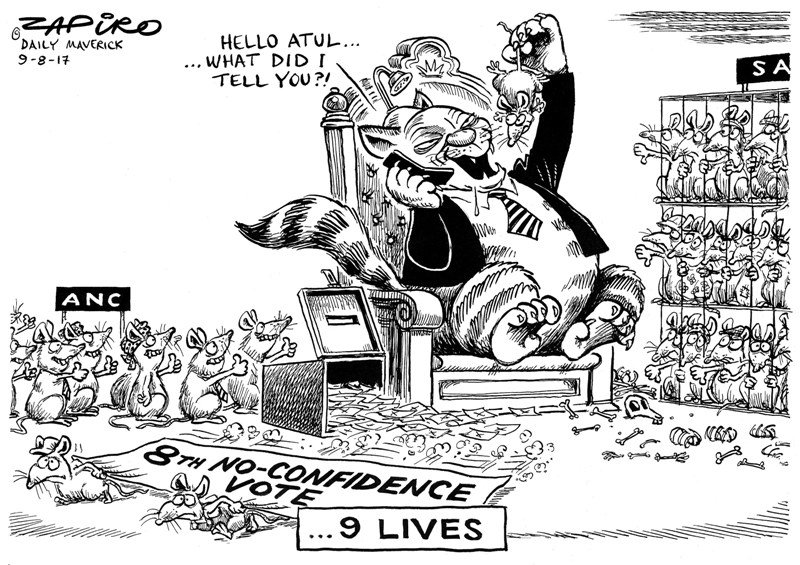 JOHANNESBURG — The relationship between business and President Jacob Zuma has been eroding at a rapid rate with the head of Business Leadership South Africa (BLSA), Bonang Mohale, saying that the country’s leader has broken the business community’s trust. BLSA represents the country’s 80 biggest companies, thus presenting what should be a serious headache for the South African president. Unfortunately, judging by Zuma’s past, he’s unlikely to even recognise BLSA. Meanwhile, the spiral into economic despair continues in South Africa. – Gareth van Zyl

By Arabile Gumede and Amogelang Mbatha

President Jacob Zuma and his ruling African National Congress have broken the business community’s trust after he recalled a finance minister from an investment roadshow in the UK and then fired him in a cabinet shuffle, the head of Business Leadership South Africa said.

The exit of Pravin Gordhan as finance minister prompted two of the three main credit ratings agencies to cut the assessment on South Africa’s foreign-currency debt to junk, thwarting more than a year of cooperation between business and government to avoid such an outcome, Bonang Mohale, the chief executive officer of the lobby group that represents about 80 of the country’s biggest companies, said in an interview in Johannesburg Thursday.

“Often when we talked about the trust deficit, we always pointed the finger at business, but this time, we honestly know that there is a lack of trust because it was broken by the president,” said Mohale, a former chairman of Royal Dutch Shell Plc’s South African unit. “The more the ANC does everything in its power to protect this president, the more they lose the battle to regain trust.”

The economy slid into recession in the first quarter, the jobless rate is at a 14-year high and business confidence is near a three-decade low as political uncertainty intensifies in the lead-up to the party’s elective conference in December. The ANC is in turmoil because of the scandals that have plagued Zuma, 75, during his eight-year presidency.

Constitutional Court Chief Justice Mogoeng Mogoeng last year found that Zuma violated his oath of office by failing to repay taxpayer funds spent on his private home in Nkandla in KwaZulu-Natal. The nation’s graft ombudsman accused him of allowing members of the Gupta family, who are in business with his son, to influence cabinet appointments and the award of state contracts, known locally as state capture. Zuma and the Guptas deny wrongdoing.

The leadership race has divided the party, with Zuma’s faction favouring his ex-wife, Nkosazana Dlamini-Zuma, while Deputy President Cyril Ramaphosa is seen as the other front-runner. The winner would be the ANC’s presidential candidate in the 2019 national election. A victory for Ramaphosa may spark renewed efforts to remove Zuma, who survived a secret-ballot vote by lawmakers to oust him as president of the country in August.

Corruption has increased under Zuma’s tenure, and removing him would be positive for the business environment, Mohale said. Zuma’s spokesman, Bongani Ngqulunga, didn’t immediately respond to calls and messages seeking comment.

“When you want to kill a snake you cut off the head,” Mohale said.