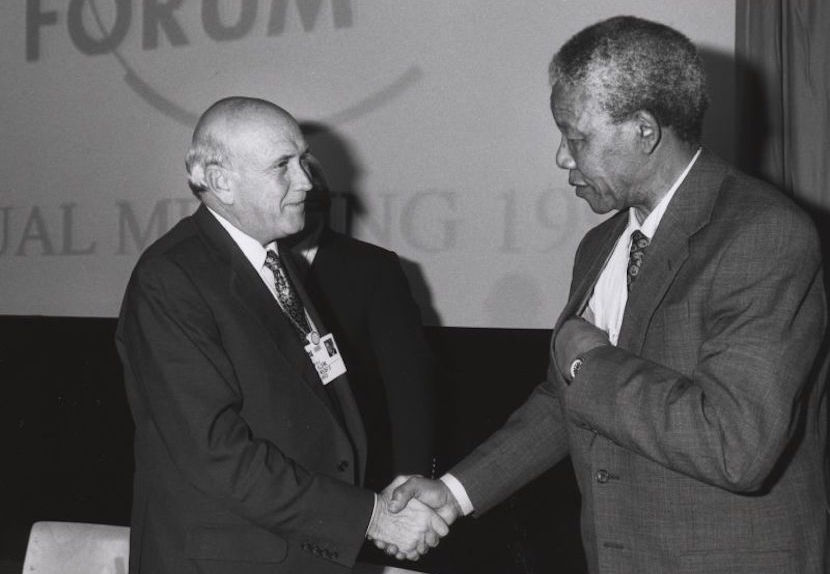 In an interview with BizNews founder Alec Hogg, former CEO of AngloGold Ashanti Bobby Godsell remarked that South Africa is “cursed with our problems, but blessed with our people”. It’s true, the country is plagued with myriad problems, from load shedding and mass unemployment to government corruption and ineffective leadership. With the recent death of former president FW de Klerk, BizNews contributor Phumlani M Majozi reflects on the current state of leadership in SA, which, he says, has declined. “Our current leadership is characterised by incompetence, corruption, and indecisiveness.” Below, Majozi contrasts SA’s current leaders with FW de Klerk and Nelson Mandela, strong leaders who possessed resolve, courage, bravery and persistence. – Jarryd Neves

Does contemporary South Africa have the leadership it deserves? Are we being led in the right direction as a nation of diverse people? Are we producing the type of leadership this country needs to achieve unity and rapid prosperity? Are we taking any lessons from our previous leaders who shaped our nation’s history for the good?

These are the questions I have been asking myself since the death of South Africa’s former president, Frederik Willem (FW) de Klerk last week.

His death made me reflect a lot about the current state of leadership in South Africa. I will be frank, straight away, we have declined in leadership. Our current leadership is characterised by incompetence, corruption, and indecisiveness.

Our presidency is helmed by, in my opinion, the weakest president since the dawn of our democracy, Cyril Ramaphosa. He is indecisive, and nobody knows what his vision, and ideology, are.

You can trace this deterioration of our leadership back to Jacob Zuma’s scandalous administration.

Think of the courageous, respected leaders we had when the country transitioned from apartheid to democracy in the 1990s. Contrast those leaders to the ones we have today – your jaws will drop.

Here’s how I see and understand leadership. Leadership is characterised by the ability to communicate one’s principles and values in a manner that is clear and concise to the world. It requires a vision, and that vision needs to reflect on the style of leadership. A leader will sometimes have to make unpopular decisions that risk his or her support.. A sense of resolve, courage, bravery, persistence, are all the definitions of a strong leadership.

Nelson Mandela and FW de Klerk – the two courageous men who led South Africa through a very tumultuous time as the country transitioned from apartheid to democracy in early 1990s – practiced the type of leadership I have described above.

The dismantlement of the apartheid system by de Klerk required bravery on his part. He dismantled a system, and racial segregation that had existed for centuries in the country. His actions changed South Africa forever.

Like any statesman who must make critical, consequential, decisions, de Klerk endured opposition pressures from some elements in the country. Nevertheless, he was brave enough to stand by his decisions. Some amongst whites called him a sell-out, for paving the way to majority black rule in South Africa.

Mandela understood very well that building a democratic state requires sacrifice, and a sense of purpose. Some blacks have called him a sell-out. Sell-out because he never embarked on a socialist revolution to force whites to give up some of their assets post-apartheid. I regard these black people calling him a sell-out as naive. They know nothing, nothing, about the complexities of building a reformed, democratic nation after centuries of divisions, wars and tensions amongst its diverse people. It’s hard! Many African countries post-colonial rule couldn’t do it.

Where is the leadership comparable to that of De Klerk and Mandela today? I do not see it. The leaders we produce are a disgrace to the country. It’s clowns who go around committing land grabs, peddling propaganda that blacks haven’t been liberated, when blacks were liberated in 1994. They are not sophisticated at all, and are driven by emotions and whims. They lack firm values – and change their principles depending on the direction of the wind. All that is disheartening – given that it is now that we desperately need principled leadership that serves the nation.

As somebody who enjoys dialogues on public affairs, I reached out to one of the business executives I’ve known for years this week, to gather his insights on the state of leadership in the country. Like me, he’s disappointed. We are not producing the type of leadership the country needs, he says. He believes we need leaders who will serve the populace, not their interests.

And two months ago, I caught up with my old high school principal on the phone. We had not spoken in a long time. Other than reminiscing about the days when I was a learner, we spoke about the fundamental problems of South Africa’s public education.

Amongst the defects  in the public education system, he says, is the lack of strong, principled leadership. A leadership that puts children’s education first – not those of politicians and interest groups. He argued that many of the problems in public education could be fixed by having a strong leadership.

Both these men are right. We desperately need dedicated, strong, principled leaders. We are missing out on the extraordinary opportunity to speedily reform the country for the better, because of the lack of strong leadership.

The leaders we produce must understand how these two giants shaped the future of South Africa for the good. We deserve leaders who will strive for the unity and fast-paced progress of this nation.