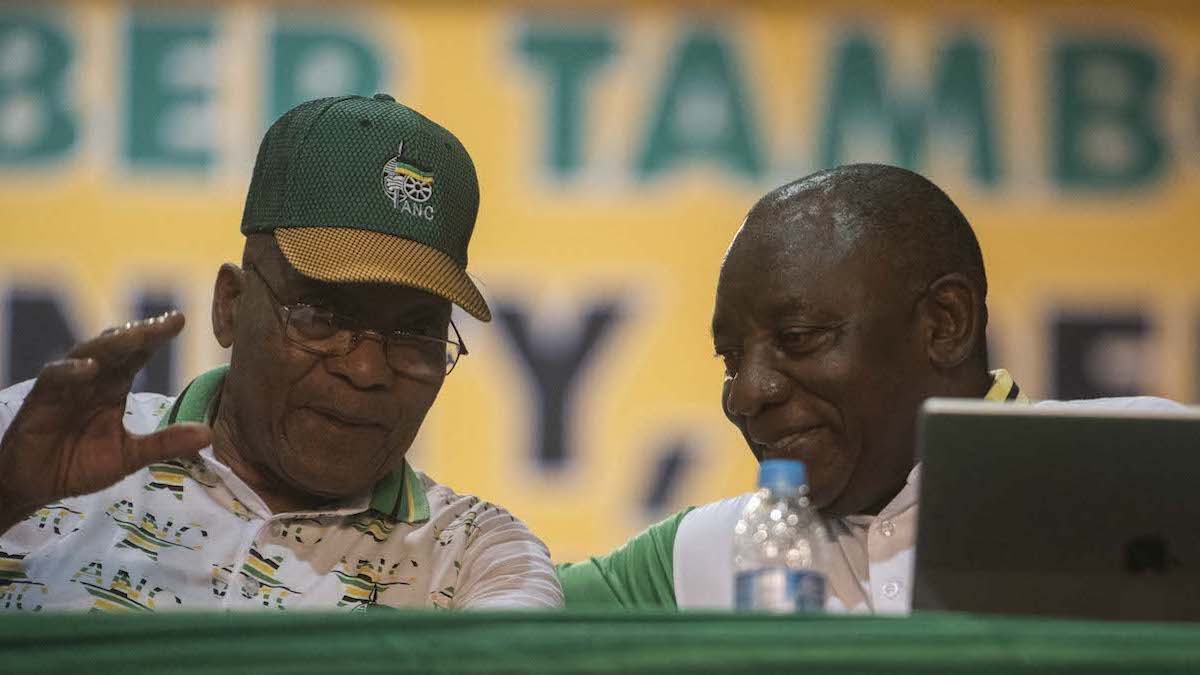 In this forthright critique of media ‘thought leaders’ and treatise on just where the ANC is today, IRR analyst Gabriel Crouse has some really sexy, meaningful definitions. Try these on for size; Ramaphoriacs” (those who saw the incumbent president and the ANC as a unit but have now turned on him), “Ramaforsakers” (already numbering millions, and then the full on “Ramastoppers,” among whom he counts himself. Alluding to an age-old South African political tactic, he asks how one sticks the ANC back together and unsticks a contending coalition. Easy: glue everything back together by race. As giant flagpoles signalled the ANC’s confusion of party with national pride, so the public’s rejection showed there’s nothing to celebrate about running out of electricity, money, ideas and credible leaders. It’s time South Africans stuck together because of common sense, not “colour-coded” nonsense, says Crouse. Personally, I’m sick and tired of hearing the ‘racist’ slur slung at anyone critical of dysfunction or cadre deployment – or of a police chief screaming at a critic to “Shut up,” without engaging with what he’s saying. – Chris Bateman

A disturbance in the force

Almost a month ago IRR CEO John Endres asked, “do you detect a shift in the force?” It was a funny way to ask a serious question about South Africa’s political trajectory and the answer remains yes, something is tearing, something else is beginning to stick, accelerando.

Once upon a time Jacob Zuma said the ANC would rule “until Jesus comes” and the line has always been funny, but the joke changed. In 2008 the funny thing (although not exactly “funny-haha”) was that he could have a point, by 2014 he did have a point that screwed deeper by 2016. In real terms per person the economy shrank since the 2010 Football World Cup, while unemployment increased, but the electorate put the blatantly corrupt ANC back in charge again, and again. Like Zuma’s laugh it was all funny in a villainous way.

After the ANC dropped below 50% in the 2021 elections The Citizen’s headline was “Does this mean Jesus is back?” That was funny in a different, mirthful way, as was the irreverent picture of a stylized Jesus stepping out a minibus taxi in the link above.

In 2021 the ANC was down bigtime from 2019, the DA was up slightly, the EFF was flat, IFP up, and newcomer ASA pulled off an interesting trick. However, people like Rebecca Davis had lectures to give, claiming that “all reputable analysts” refuse to compare municipal elections to national ones in search of trends. “That is why”, Davis went on, “the IEC website does not even give one the option to compare 2021 results with 2019 results: to do so is almost meaningless.”

Can you think of anyone today who still thinks the 2021 election has a meaningless connection to the ANC’s prospects in 2024?

Now things are different. It is not just that Ramaphoria is over – that became a joke before the pandemic – but rather that the dots between disillusionment with “Saint Cyril“, as Tom Eaton coined him in 2018, and the political consequences of a potentially new coalition government in 2024 are finally being connected.

It really is worth thinking back to see how far things have come. Not long ago the winning idea was that a vote for the “good ANC” was a vote against the “bad ANC”. Somehow the same dot got disconnected from itself (thank you Peter Bruce), but that absurdity is finally seen for what it is by the fancy and the furious alike. The fabled emperor’s robe does not exist, never has, but now the high-ups admit it.

For example, Adriaan Basson, chief editor of the country’s largest newspaper, News24,used to say the sweetest things about Ramaphosa. By now even he figures Ramaphosa will “survive, but the ANC won’t” since in “last year’s municipal elections the ANC only managed to pull 46% of votes nationally” and due to material failures and “Ramaphosa’s own integrity scandal” things could get so much worse that a new coalition replaces the ANC in 2024.

Barney Mthombothi, the premier columnist at the Sunday Times, who has always had more penetrating powers of analysis than Basson, has gotten even more critical of the ANC in toto. “Stop acting like a victim, Mr President” goes the headline to one of his recent pieces. Mthombothi recalls there how happy he felt when Ramaphosa won in 2017 (as did I), but now “I wish you had lost at Nasrec”, because that would have accelerated the ANC’s demise and this “country stands a better chance of survival with the ANC either dead or out of power”.

Here is another zinger, this time from an ANC bittereinder. “I am 86 years old. It is possible that I am the only person surviving who addressed the Congress of the People on 26 June 1955…[Now] I will not renew my membership of the ANC. The ANC is no longer fit to govern.”

I laughed when I first read these words by Mervyn Bennun, not what you could call an overly hasty thinker. But there it is, the penny finally dropped, and something is funny about the fact that no one is too old to get divorced from the ANC. It’s a tragicomedy.

Criticism of the ANC

Peter Bruce was “I’ll vote ANC nationally…and provincially” in 2019. By this winter it was “[t]he country needs the ANC below 50%. Its government is rotten beyond redemption…” Even more interestingly, Bruce edged towards criticizing ANC race policy. The headline response to the President’s new BEE advertising council was “Why Ramaphosa is deluded about ‘black capitalism’”. The end line was “It just makes you want to weep. The insanity, the repetition, the uselessness, of it all…I do not enjoy living under a government that cannot think”.

The list of former “Ramaphoriacs” who have turned against him and the ANC as a unit goes on and on. I haven’t seen polling, but I’d bet the Ramaforsakers already number in millions. Ramastop.

Only one in four adult citizens voted for the ANC in 2019 but two in four did not vote at all. That’s the silent majority. That’s who needs to join in. Participation is necessary for change.

If I was an ANC campaigner I would be terrified of people beginning to think about 2024 as a change election that finally splits the ANC’s brand from the nation’s. When the giant SA flagpole suffered spectacular “erectile disfunction” it was more than just an embarrassment for the ANC. It was a signal that the public will not tolerate that party’s attempts to wrap itself in the flag anymore after running out of electricity, money, ideas, and credible leaders.

Coming together is the idea of a new coalition capable of getting their act together to govern this republic better. Metros under new coalitions could inspire the forsaken to look to a national equivalent. But the metro coalitions will need to be significantly better governed come 2024 for a difference to be felt at the ballot box.

How to stick the ANC back to power and unstick a contending coalition? Glue everything back together by race.

The stage 6 winter has barely begun and it is already a time of opportunity for more retrograde forces. Labour Minister, Thulas Nxesi, has effectively called on Ramaphosa to sign the Employment Equity Amendment Bill (EEB) into law by September. This law will ramify public sector-style race quotas across 85% of the private sector directly, and indirectly impinge the rest. Under the EEB the “Barnard Principle” can be applied to just about any job, meaning the state can say it is better to leave a post empty rather than hire someone from the “wrong” race. We continue to lobby against this, we have gathered around 25,000 signatures to stop the new nationwide race quotes, see more here. The new race quotas are, next to expropriation without compensation, recipes for an end.

Without much more potent resistance the EEB will rule until 2024, and ruin the Rule of Law, positive race relations, and the prospects of the unemployed.

The ANC’s last trick is likely to be a desperate grasp at what Minister Nxesi called “more aggressive” race policies. Its best hope at winning 2024 is likely to be by coalition with the EFF, after adding fire to those policies that the ANC and EFF both already agree on. That starts with a paranoid fixation on “white monopoly capital” as enemy number one and ends with potential election fraud. The cost of freedom is always vigilance, but there are certain times when this is more urgent than at others. We embark on just such a time and sticking together by race will help no one decent. South Africans need to stick together by common sense, not colour-coded nonsense.