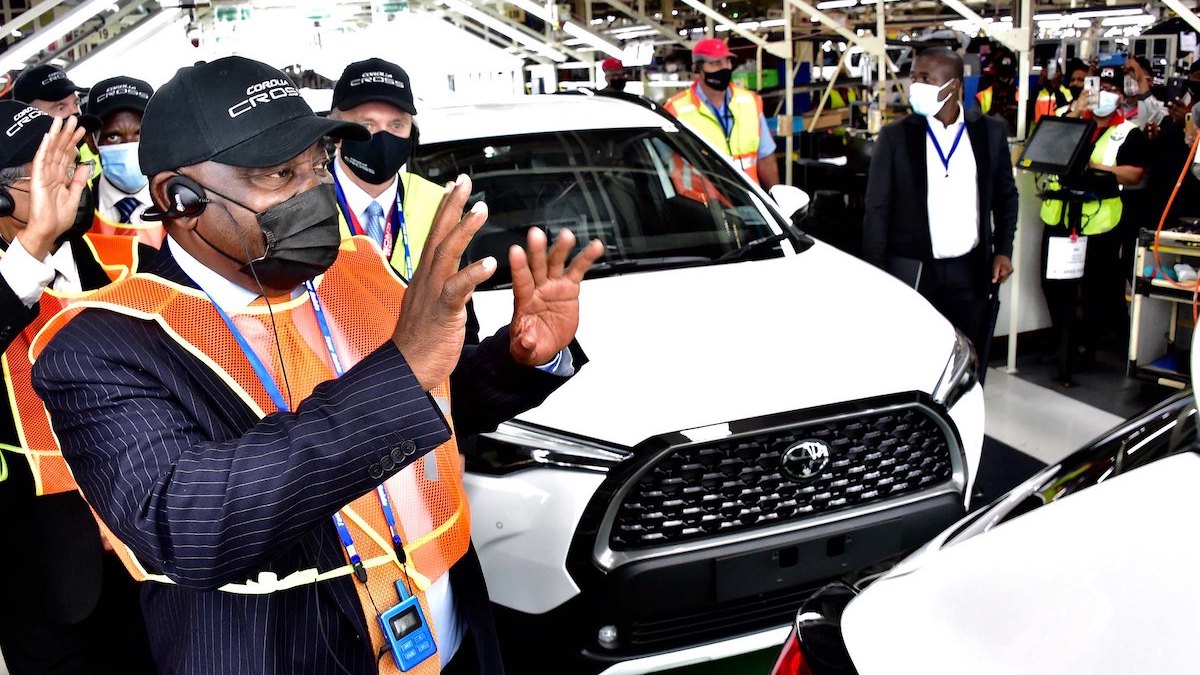 The government’s communist planners have been tinkering under the bonnet of the automotive industry long enough to sound the warning siren for every other industry which it intends to control through a Master Plan. One look at communist ideology, read with Ivo Vegter’s incisive analysis in this Daily Friend piece, will tell you that command of the levers of production is well advanced, (as is the ensuing decay), in South Africa’s once capitalist dominated economy. Creating dependency through regulation is the ultimate aim, be it reasonable sounding requirements like local content, BEE or raising spending on training, research and development. The addictive mix in this tempting chalice contains tariff protection from imports and lavish subsidies to ‘support and enable business”. The result is locally produced cars cheaper for foreign owners then us, and lucrative taxes for government ministers to buy luxury cars with, says Vegter. Read on – it gets even better. – Chris Bateman

The government loves its industry Master Plans. So do industries, because who doesn’t like juicy incentives? So why is the local motor manufacturing industry facing extinction?

The automotive industry is often hailed as a beacon of successful government intervention.

The Motor Industry Development Programme of 1995, the Automotive Production and Development Program (APDP) of 2013, and more recently the South African Automotive Master Plan for 2020 to 2035 (SAAMP) lay out lofty goals and targets for the industry. For 27 years, they have offered automotive component, assembly and manufacturing companies liberal subsidies, tax breaks and tariff protection in order to achieve them.

As a result, the industry contributes 4.3% to GDP, of which 2.4% is manufacturing, and 1.9% is retail. It accounts for 17.3% of South Africa’s manufacturing output. The export of vehicles and automotive components to 152 international markets reached a record R207.5 billion in 2021, representing 12.5% of South Africa’s total exports. The industry employs 110 000 people, and claims to be responsible for 457 000 indirect jobs.

All this smells like success, and the industry trumpets these numbers widely.

So much so, that the communist-run Department of anti-Trade, anti-Industry and anti-Competition (DTIC) developed a range of industrial Master Plans; one each for the forestry sector, the poultry sector, the retail, clothing, textiles, footwear and leather sector, the sugar sector, the steel and metal fabrication sector, and the furniture sector.

All of them will be given gilt-edged insights from clever communists like Rob Davies and Ebrahim Patel, that wouldn’t occur to the average businessperson, such as raising production, improving competitiveness and innovating.

They will also be burdened with obligations, such as increasing local content, preferring the employment of particular race groups, and raising spending on training, research and development.

In return, they will be given tariff protection from imports, and lavish subsidies to ‘support’ and ‘enable’ their businesses.

All this support, of course, comes at a cost. Not to the industry concerned, but to South African consumers.

In the case of the automotive industry, the dark side of the government’s vehicle manufacturing master planning is that South Africans are taxed, in addition to value-added tax of 15% and carbon tax up to 6%, as much as 30% of the sales price of any new vehicle. Imported vehicles and components are also subject to a hefty tax charge.

This has the perverse effect that rich Europeans can buy South African-built cars for significantly less than South Africans can buy them. After all, there they have to be price-competitive. Here, they are protected from competitive pricing.

That poor South Africans are subsidising rich Europeans is, one assumes, just how communists roll, especially when there are lucrative taxes to be collected to fund the government bigwigs’ own luxury cars.

Yet if all this communist master planning worked so well, why is the automotive industry facing extinction?

What was once simply called the National Association of Automotive Manufacturers of South Africa (NAAMSA), has, in a fit of 1990s originality, been rebranded to the rather pretentious ‘naamsa | The Automotive Business Council’.

He claims there aren’t enough bureaucrats and paper-pushers, nor are there enough resources, ‘to develop policies to build a new industry’.

He’s quite right, of course. Not only has the Auto Green Paper on the Advancement of New Energy Vehicles in South Africa been gathering dust somewhere in Patel’s assistant’s office, but overweening coddling by the state has made the local automotive industry entirely unable to stand on its own feet or do anything independently, like the rest of us must do in the adult world.

It’s acting like a 27-year-old living with his parents complaining that daddy won’t tell him how to do his job.

The SAAMP has as one of its goals: ‘The South African automotive industry will be globally competitive (relative to leading international automotive producers) by 2035.’

That isn’t a goal. It’s an admission. After 27 years of taxpayer-funded support and subsidies and tariff protection and incentives and central planning, the South African automotive industry is still not globally competitive, and won’t be for at least another 13 years, when the support programmes will have been in operation for four decades.

Given that it openly admits to being incapable of changing to meet market demand without the state holding its hand, I’ll eat my hat if it actually does become globally competitive, independent of extensive taxpayer support, by 2035.

When then-minister Rob Davies introduced the SAAMP, he not only took it upon the government to plan everything that companies ought to be planning for themselves – such as developing markets and increasing production – but also said that ‘the intention is to moderate the excessive and distorted liberalisation of the South African automotive market’.

The very market forces that could actually make the industry competitive, both among local manufacturers and against foreign rivals, our central planners view as ‘excessive and distorted’.

Of course, NAAMSA and its counterparts in the components and tyre industries all welcome the SAAMP. After all, being protected from ‘excessive and distorted liberalisation’ means being protected from competition. Protecting the profitability of government-approved big businesses from upstart competition is one of the primary functions of the DTIC.

The whole sordid story, however, of an industry lavishly propped up by taxpayers now being incapable of meeting changing demand without further government assistance, shows what a stultifying effect central planning has on an industry.

All industries that become subject to Master Plans will have a generously padded legislative and regulatory scaffolding erected around them that constrain them to deliver the plans and visions of communist bureaucrats, and render them unable to change, grow, adapt or innovate outside the cushy embrace of that structure.

These industries will become as inefficient as the South African automotive industry, which cannot even copy innovators like Elon Musk without elaborate government assistance, let alone innovate to make better products on their own.

We should not tolerate incumbent businesses colluding together to raise prices and keep out competition. There should be no central planners in government to subsidise that collusion with the hard-earned income of long-suffering taxpayers.

It would make all South Africans better off if the inefficient companies died, the capital invested in them was redirected to more productive ventures, and the price premium paid for their products was spent elsewhere in the economy.

This would make room for more capable and nimble companies to arise and thrive, and for more productive ventures to be established. It would leave consumers more prosperous, too.

Making subsidised luxury cars for rich foreigners, only to be ‘facing extinction’ when those foreigners change their tastes, is not ‘success’.

It is perverse, regressive, and emblematic of the communist central planning envisaged by the ANC’s National Democratic Revolution.