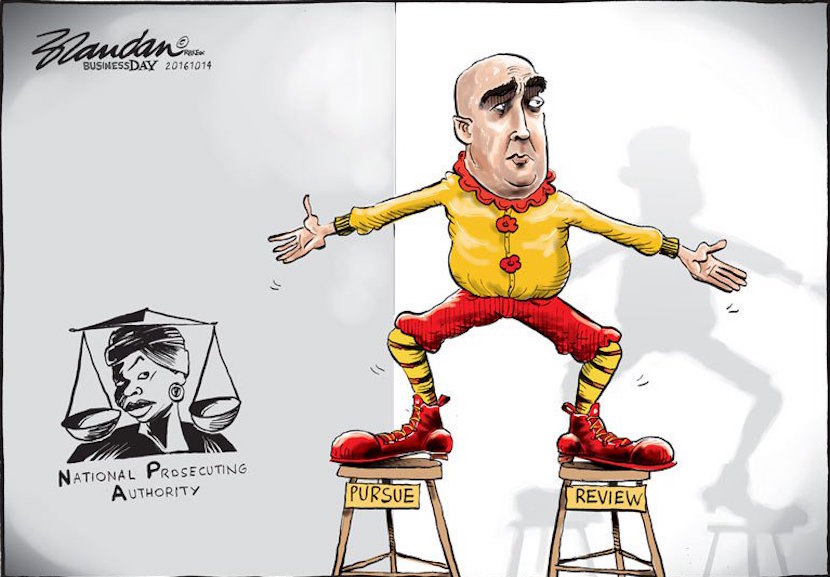 To onlookers, it seems inescapably obvious that South Africa’s finance minister Pravin Gordhan has been targeted by senior political figures who do not want him to do his job properly – with a criminal case against Gordhan the most obvious sign he is being hounded out of office. Rest assured: the National Prosecuting Authority (NPA) cannot win its case of fraud, or alternatively theft, against Gordhan. This is the opinion of legal expert Cathleen Powell, who has worked through the charges with a fine tooth comb. She has gone one step further, analysing the legal technicalities on the jurisdiction of the NPA and the Hawks investigative unit. Powell comes to the conclusion, based on a careful assessment of the facts and legislation, that the law in this case is being used as an instrument for political gain. Powell’s in-depth reading of the matter underscores that is high time for an overhaul of the people who are running our law enforcement agencies. The separation of powers is critical in maintaining democracy. Along with state capture, the lines have become blurred between the executive and legislative organs of state. – Jackie Cameron

The NPA does have the power under law to charge people with crimes – that’s its job. But do the charges against Gordhan stand up to scrutiny? And did the NPA follow the correct processes in charging him?

Closer examination shows that the NPA is bringing a case it cannot win. Indeed, the weaknesses of the case are so glaring that any vaguely competent criminal lawyer should have been able to spot them. Secondly, it is doing so in a manner which belies its claim to be protecting and enforcing the law.

This case may therefore have less to do with the law than with the pursuit of a political agenda. If so, law has ceased to be the basis of a just and fair society – and instead become an instrument for political gain.

The charge sheet brings a case of fraud against Gordhan, with an alternative charge of theft. Both charges are meant to arise from his approval of early retirement by Ivan Pillay from the South African Revenue Services (SARS), and his rehiring of Pillay as Deputy Commissioner on a fixed-term contract. Related to this is the so-called “penalty” which SARS paid to Pillay’s pension fund, which allowed him to enjoy full pension benefits (as though he had retired at the statutory age). Gordhan was commissioner of SARS at the time these events took place.

The merits of the charges

We can dispose of the charge of theft without further ado. Gordhan cannot be guilty of theft if he did not appropriate the money that was paid out for Pillay’s benefit. There has never been any indication that anybody other than Pillay benefited from his early retirement on full benefits.

To prove the main charge – fraud – the NPA would have to establish that Gordhan unlawfully and intentionally made a misrepresentation which caused prejudice or potential prejudice to another (or to the state).

According to the charge sheet, these requirements are all met because Gordhan “unlawfully, falsely and with the intent to defraud” pretended to SARS that it was liable to pay R1 141 178.11 (US$78 000) to the Government Employees Pension Fund.

Which of the elements of fraud could the NPA prove? Clearly there would be prejudice to SARS if it was made to pay out more than R1 million which it did not owe. But, on the available evidence, SARS did owe that money to the pension fund.

Furthermore, none of the other prerequisites of fraud can be met.

The Government Employees Pension Fund guide book confirms that, in such cases, the employer pays the “additional liability”. In other words, when Gordhan recommended that SARS pay the pension “penalty” for Pillay SARS was, in fact, liable for that amount.

The NPA’s only chance of establishing a “misrepresentation” by Gordhan is by establishing that he could not lawfully approve the early retirement in the first place. But to establish that the approval was unlawful, the NPA would have to show that there was no “sufficient” reason for such approval.

Shaun the sheep rushes to charge #Gordhan ,stands in stark contrast to his foot dragging avoidance to prosecute the 783 charges against Zuma

The Public Service Act does not set out what such a reason would be, vesting considerable discretion in the executive official. In addition, the Legal and Policy Directive which Gordhan obtained at the time of authorising Pillay’s early retirement established that 3000 cases of such early retirement had already been approved.

It would not be enough that the approval of Pillay’s retirement and rehiring were unlawful (which they almost certainly were not). The prosecution would also have to show that these acts were so obviously unlawful as to prove an intention to defraud on Gordhan’s part.

The second issue is whether the NPA followed appropriate procedures before it charged Gordhan.

The decision about which particular cases should be prosecuted is made by the provincial directors of public prosecutions (DPPs). Each director is empowered to do so with respect to crimes carried out in his or her jurisdiction.

In addition, certain specialised units have been set up to prosecute crimes that are not limited to any one jurisdiction. These include the Specialised Commercial Crimes Unit (established in 1999) and the Priority Crimes Litigation Unit (established in 2005). The directors of these units may also initiate a prosecution, but only with the concurrence of a provincial director.

In addition the head of the NPA, the National Director of Public Prosecutions (NDPP), may – in writing – assign a matter to a prosecuting unit which does not otherwise fall within its remit. This director does not have the power to initiate prosecutions on his or her own. Indeed, Shaun Abrahams, the current director, emphasised that he had not decided to prosecute Gordhan “on his own”, but on the advice of the Priority Crimes Litigation Unit with the concurrence of the director of public prosecutions for North Gauteng.

So the Zuma state capture application is on November 1 and Gordhan appears on November 2? People better pitch tents at PTA High Court

The problem is that fraud does not fall within the remit of the Priority Crimes Litigation Unit. This unit was set up to prosecute international crimes (such as war crimes and crimes against humanity), terrorism, treason, sabotage and offences under the Internal Security Act. In other words, it was set up to deal with crimes which threaten international or national security.

Does it matter which unit prosecutes?

Isn’t it a mere technicality which unit makes the decision to prosecute? The answer is emphatically no. A case like this demonstrates how important it is that a body which claims to enforce the law abides by law in its own processes.

Abrahams’ “cherry-picking” of the litigation unit to consider this prosecution supports growing evidence that it is not about ensuring “justice for the victims of crime by prosecuting without fear, favour or prejudice” – the stated mission of the NPA. Something else is going on.

It’s also important to note that the charges brought by the NPA are completely new. They bear no relation to the crimes which the Hawks initially claimed they were investigating against Gordhan.

The inescapable inference is that the Hawks and the NPA have not noted a possible crime, investigated it carefully to see if there is sufficient evidence of a crime and, if so, who committed it, and then conducted a thorough legal investigation to ensure that they could successfully prosecute the case in court. Instead, they have, for over a year, focused on one man – Pravin Gordhan – and trawled through all the material they could find to pin a charge on him.

Abrahams spent the first 30 minutes of his press conference dwelling on the so-called SARS “rogue” unit. He read out voluminous sections of the Constitution and legislation to establish that only the President has the power to establish a covert unit to investigate threats to national security. None of his statements in the first half hour provided a legal basis for any criminal prosecution. They were also completely unrelated to the charges that were then announced. The statements were simply a smear, ostensibly legitimated by the legal authority of the NPA. This is a serious misuse of that office.

But Abrahams also wilfully ignored the point made by numerous commentators and Gordhan’s own legal team that the SARS unit had nothing to do with national security – a point which renders irrelevant the myriad provisions that Abrahams read out. The relevant legislation does not prohibit the creation of a covert unit. It merely prohibits any such unit from gathering “departmental intelligence”. This is defined as intelligence related to “any threat or potential threat to the national security and stability of the Republic”. By contrast, the SARS unit investigated tax fraud and the evasion of excise duties.

In such situations law seems, at best, to be an afterthought. At worst, it can become an instrument of the powerful against any obstacles to their plans.

Wherever we are on this spectrum, the reckless disregard of the substance and procedure of the law by the very state agencies which claim to protect and enforce it is deeply ominous.