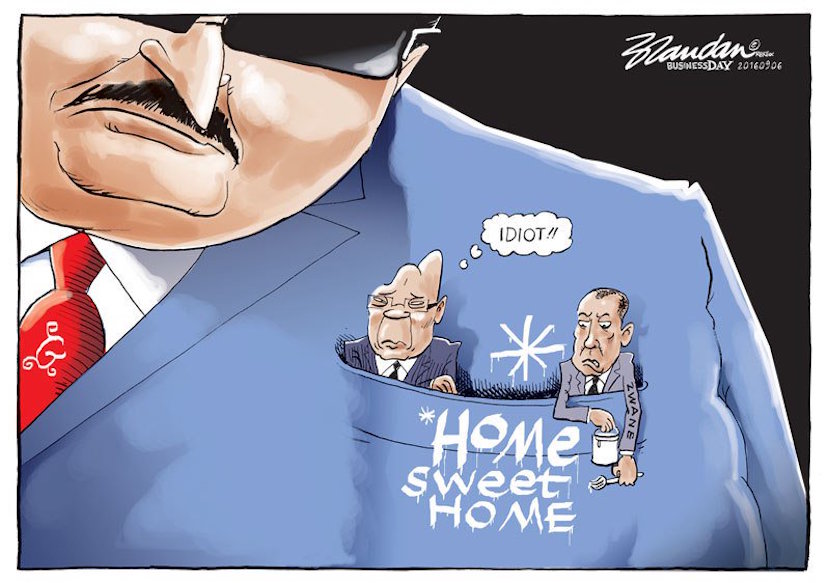 There can be little doubt that mining minister Mosebenzi Zwane is up to his eyeballs in the business of state capture following the release of former Public Protector Thuli Madonsela’s #StateCaptureReport. Aside from having private meetings with international business players on foreign terrain at taxpayers’ expense, Zwane has wasted money too. He has missed expensive flights without cancelling them. What’s really intriguing, though, is his trip to India, landing at an airport not far from the home town of the Gupta family – the rich Indian brothers who are the central figures in the #StateCaptureReport. Zwane, you will recall, is also the minister that announced cabinet recommendations for a judicial inquiry into banks – which were refusing to do business with Gupta businesses. Although the cabinet subsequently indicated Zwane was wrong, he was never removed from his position. At the very least, Zwane should be removed from office. He has indicated that he cannot be trusted with taxpayers’ funds and, after the bank inquiry fiasco, no-one can trust a word he says. – Jackie Cameron

Johannesburg – A series of unused flights during a “mysterious” trip abroad by Mining Minister Mosebenzi Zwane, during which he allegedly escorted a member of the Gupta family to a meeting with an international mining company, may have cost taxpayers nearly R100 000 in possibly fruitless or wasteful expenditure.

According to former Public Protector Thuli Madonsela’s “State of Capture” report, Zwane travelled to Zurich during November and December 2015, to attend a meeting with Glencore CEO Ivan Glasenberg.

Flight records included in the report show Zwane was on board a flight from Johannesburg to Dubai on November 29, and arrived in Zurich, Switzerland, the next day.

These missed flights cost the South African taxpayer just over R96 000, which, if they could not be “fully explained”, would amount to fruitless and wasteful expenditure, reads the report.

The missed flights also raises questions over the purpose of Zwane’s trip. It is unclear why he would have wanted to fly to Delhi after a meeting Glencore’s CEO. Delhi is situated some 160km from Saharanpur, the Guptas’ hometown in India.

According to the report, it is unclear how Zwane travelled from Zurich to Dubai after the meeting with Glasenberg, though it appears as if he did somehow manage to travel to the UAE.

Surely someone leaked the State Capture report. The actions of Zuma, Zwane & Van Rooyen point to people who know what's inside the report.

“The Minister did not complete his travel itinerary and mysteriously ended up in Dubai, without boarding his scheduled flights,” the report says.

Zwane’s role in the Gupta-owned Tegeta Exploration and Resources’ acquisition of Optimum Coal Holdings has been questioned before. Optimum’s coal mines have secured lucrative coal supply contracts from Eskom.

There has been speculation that Zwane, as mining minister, placed pressure on Glencore to accede to the Guptas’ efforts to buy Optimum from the Swiss mining giant.