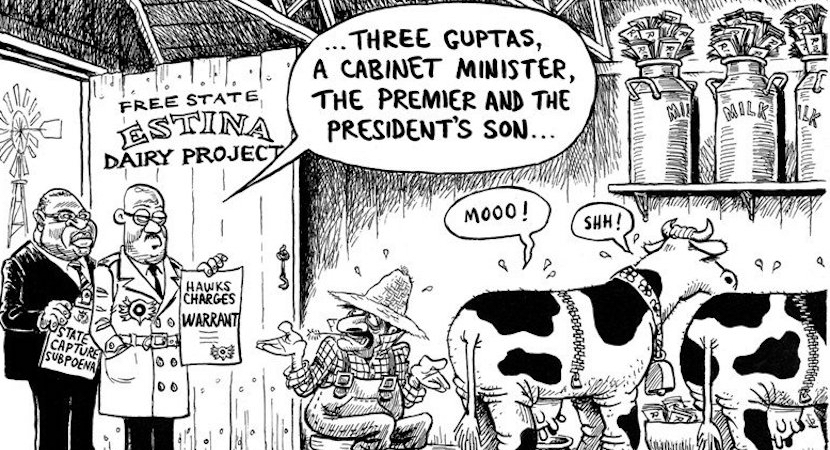 EDINBURGH — India’s state-owned Bank of Baroda has facilitated the state capture strategy devised by the Gupta family and implemented by President Jacob Zuma and cronies. Bank of Baroda — one of India’s largest — allowed Gupta entities to move hundreds of millions of dollars originating in alleged dirty deals into offshore accounts, an investigation by the international Organized Crime and Corruption Project (OCCRP) and The Hindu has revealed. In South Africa, meanwhile, the Bank of Baroda also helped Atul Gupta get his hands easily on state funds, with R10m transferred to his private bank accounts, according to the National Prosecuting Authority. The Estina dairy farm project may hold the key to successfully prosecuting the Gupta family and others with whom they have worked hand-in-glove. Estina was used to siphon funds out of state coffers, with some of this money making its way back to South Africa to pay for the controversial Sun City wedding hosted by the Gupta family in 2013. All of this moneylaundering took place under the noses of accountants at auditing firm KPMG. – Jackie Cameron

(Bloomberg) – The Bank of Baroda’s South African unit has been in possession of the “proceeds of crime” linked to a dairy farm project that involved the politically connected Gupta family, said Thato Ntimutse, a lawyer for the National Prosecuting Authority’s Asset Forfeiture Unit.

While India’s Bank of Baroda has tried to stop the state from freezing 30 million rand ($2.5 million) of its funds over the dairy farm dispute, it should be noted that the lender has gone so far as to take its own clients, the Guptas, to court to try and sever ties, Ntimutse said in the High Court in Bloemfontein in the Free State province on Friday. Although state funds intended for the farm may also have gone through other banks in South Africa, Bank of Baroda has a single current account into which all funds are paid so that legal and illegal money co-mingles, he said.

The case is related to a state-owned farm in the Free State leased to Gupta-linked company Estina (Pty) Ltd. in 2012. The regional government agreed to help develop the land, but the High Court on Jan. 19 gave the National Prosecuting Authority permission to freeze the project’s assets after more than 220 million rand destined for the farm was said to have been transferred to Atul Gupta, one of three brothers, and a number of companies and associates. State prosecutors allege Atul Gupta received 10 million rand.

The 30 million-rand preservation order is wrong because the money due to clients had already been withdrawn and the attachment of an equal amount of the lender’s own funds is “unsustainable,” Luke Spiller, a legal representative for the Bank of Baroda, said in the court on Thursday.

Atul Gupta, who didn’t appear in Bloemfontein on Thursday or Friday, has previously denied in court documents that cash meant for the development of the dairy farm was transferred to his private bank accounts. Bank of Baroda transferred the 10 million rand that Estina paid it into a fixed-deposit account in the farm’s name a few days after first receiving the funds and they did not go to Atul Gupta, according to his lawyer Rafik Bhana, who also spoke in Bloemfontein.

“The test is not whether this is money laundering or not, it’s about the 10 million rand,” Bhana said. “This is more than about the Guptas. This is about the rule of law.”

Judgment has been reserved on the applications to overturn the orders against Atul Gupta, Bank of Baroda and the companies linked to the Gupta family, Judge Andre Fouche Jordaan said in the High Court on Friday. A ruling will be given on March 9, he said.

Atul Gupta, who signed his legal documents in Dubai, and businesses linked to his family have applied to the Bloemfontein court to reconsider the assets’ attachment. The Gupta family have close ties to former President Jacob Zuma and have been accused of using the association to win state business and influence government appointments. Zuma and the Guptas have denied wrongdoing.