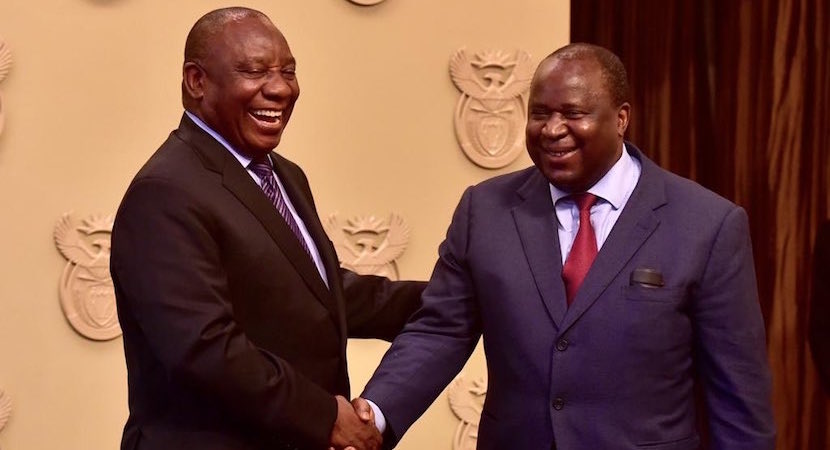 CAPE TOWN — South Africa seems to change Finance Ministers like it does shirts, some of them soiled, others clean and in the latter years, a Zuptoid camo-shirt – hard to spot the dirty patches. Luckily, the most recent incumbent, Nhlanhla Nene’s shirt wasn’t camouflaged and easily showed the dirt, though his detractors would argue otherwise, his transparency and honesty now in serious question after trying to hide the extent of his association with the Guptas. At least he ‘fessed-up which might even change the perceived pattern of his clothing, unlike former Eskom chief Brian Molefe who claimed he was at a ‘shebeen’ when spotted in Saxonwold near the Gupta’s luxurious residence. There are lies and eternally damning lies, the latter normally far more creative. The Guptas won’t thank Molefe for redubbing their home ‘the Saxonwold Shebeen’ in the public mind. Just as much informal, secretive business was done at the Gupta residence as is done in an actual township shebeen, we now know. Which is why President Ramaphosa’s removal of Nene, much as it opens him up to accusations of selective axing- given his Zuptoid cabinet baggage – is proving to be the right move. – Chris Bateman

By Mike Cohen and Colleen Goko

(Bloomberg) – Nine years after leaving his post as governor of South Africa’s central bank, Tito Mboweni has been appointed as the nation’s finance minister and faces the unenviable task of reviving an economy that’s mired in recession. He’ll have limited room to manoeuvre.

With government debt at already dangerously high levels and the country at risk of losing its sole remaining investment-grade credit rating from Moody’s Investors Service, Mboweni will have little option but to stick to the National Treasury’s expenditure ceilings and deficit-reduction targets. His ability to stimulate growth through increased spending or tax breaks will also be curtailed.

Mboweni, 59, succeeds Nhlanhla Nene, who was named finance chief by President Cyril Ramaphosa in February and resigned on Tuesday after lying about his meetings with three businessmen who were implicated in the looting of state funds. Nene’s predecessor, Malusi Gigaba, had raised taxes and cut spending in the February budget, warning that the state’s coffers were bare.

“This shouldn’t really have much impact on the market or lead to any detrimental change to policy,” Natalie Rivett, senior emerging-markets analyst at Informa Global Markets, said by phone from London.

Mboweni, who went into exile during apartheid, trained as an economist and served for four years as labour minister in former President Nelson Mandela’s cabinet after apartheid ended in 1994. He oversaw the implementation of a raft of new laws to protect worker rights – a regime that a number of analysts say has fuelled a 27 percent unemployment rate.

During his decade-long tenure as central bank governor, Mboweni established a reputation as a monetary-policy conservative – he was a fierce defender of inflation targeting, which was introduced the year after he took office, and raised the repurchase rate to 13.5 percent in 2002 to control price growth and boost the rand.

“A strong personality will help re-establish National Treasury in its place at the heart of macro-policymaking and spending oversight in government but could come at the risk of political complications,” Peter Attard Montalto, head of capital markets research at research firm Intellidex, said in an emailed note. “He meets our key test of someone who will enable and defend National Treasury staff and its core conservatism.”

There are very few people who are able to own up to their error of judgement , comrade @NhlanhlaNene_MF is amongst the few . Congratulations to our new finance minister @tito_mboweni .

After leaving the bank in 2009, Mboweni went into business, establishing his own investment company and serving on a number of company boards including as the chairman of AngloGold Ashanti Ltd. He remained active in politics, and was elected to the ruling African National Congress’s decision-making national executive committee at a party congress in December.

“Mboweni possesses the necessary integrity, skillset and experience which can generate confidence in the markets, among investors and generally in the business community,” said Raymond Parsons, a professor at the North West University’s School of Business and Governance. His appointment “will help to ensure stability and consistency in policy direction,” especially with the mid-term budget due to be released on Oct. 24, he said.

While Mboweni is South Africa’s fifth finance minister in less than three years, the financial markets welcomed his appointment and the rand erased losses and advanced as much as 1.4 percent against the dollar on Tuesday. Government bonds and banking stocks also gained. The currency was little changed at 14.5583 per dollar by 7:17am in Johannesburg.

The Rand says thanks and is feeling much better now. #TitoMboweni #Rand

Nene’s resignation came the week after he admitted to an anti-graft inquiry that he met members of the Gupta family at their home six times, contradicting statements in a 2016 interview that he only encountered them at public events. The three Gupta brothers, who are allies of former President Jacob Zuma, were implicated by the former anti-graft ombudsman in influencing government appointments and the award of state contracts – allegations they and Zuma deny.

Nene is not the only minister in Ramaphosa’s cabinet over whom a cloud hangs. Gigaba and Bathabile Dlamini, who head the home affairs and women’s affairs portfolios respectively, have been ruled to have perjured themselves in court cases.

The ANC forced Zuma to quit as president in February after almost nine years in office, clearing the way for his 65-year-old deputy and party leader Ramaphosa to take over. Ramaphosa has said combating graft is one of his top priorities, and he’s replaced a number of other officials implicated in wrongdoing.

While Mboweni has a good reputation, doubts will continue to linger over Ramaphosa’s ability to clean up after Zuma’s scandal-marred tenure, according to Guillaume Tresca, a senior emerging markets strategist at Credit Agricole CIB from Montrouge, France.

“The Nene case shows how it is difficult for Ramaphosa to change the country,” Tresca said. “Foreign investors, after a well-managed political transition, have been disappointed and the links between the Guptas and Nene shows it is difficult to erase the past.”