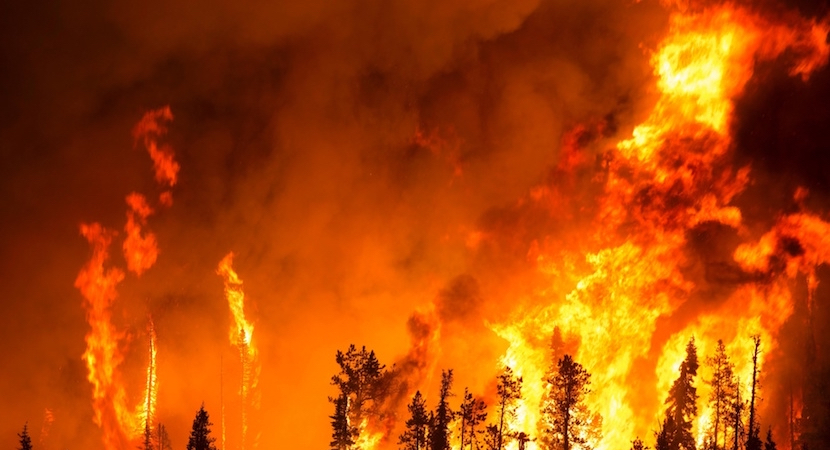 JOHANNESBURG — Devastating fires in the Garden Route continued to rage over the weekend with flames reaching as far as Plettenberg Bay and Port Elizabeth. By Saturday evening, authorities said that most blazes were under control. However, the death toll has climbed to six while homes and lives have been destroyed. It’s only now that people in the area are starting to assess the damage and drone footage has highlighted just how much destruction has taken place. Were you impacted by fires – tell us your story by emailing us on this link – Gareth van Zyl

Knysna –  A 63-year-old man passed away in Concordia on Saturday afternoon, bringing the total fire-related deaths in the Eden district to six people.

News24 previously reported that a family of three passed away on Wednesday afternoon, a small boy died on Thursday morning and a firefighter was confirmed dead on Friday afternoon.

In a statement, Western Cape local government spokesperson James-Brent Styan said five people were also in a severe condition on Saturday afternoon after they suffered serious burnt woods during evacuations.

Gail force winds up to 97 km/h sustained several flare-ups on Saturday resulting in several suburbs being evacuated as a precautionary measure.

Most fires were however contained by Saturday evening after subdued wind conditions, Styan said.

One additional home in Brenton-on-Sea was destroyed due to fire flare-ups on Saturday afternoon, the Eden District municipality said in a statement.

The eleven aircraft grounded by strong winds on Saturday morning were able to take to the air late on Saturday afternoon.

Styan said the fire line in the Eden district on Saturday extended over an area of roughly 100 kilometres.

Weather conditions may improve during the course of Saturday evening improving firefighting conditions, he said.

The South African Weather Services forecasted cloudy conditions for the Eden district on Sunday with north-westerly winds between 10 and 20 km/h. No additional rain is expected for the region following light rain on Saturday afternoon.

Over 200 informal structures and 408 formal structures have been confirmed damaged by the blaze. The Western Cape government said the South African Social Security Agency (Sassa) will be at Hornlee Hall, Masifonde library, Dam se Bos, Sedgefield and Karatara from Monday to Thursday to issue residents pension cars which might have been lost in the blaze.

Confirmation of venues will, however, be provided on Monday.  Styan said the department of Home Affairs indicated that they need an updated list of displaced beneficiaries who have lost their documentation.

Displaced people residing with friends and family are urged to contact the regional home affairs official Mosiuoa Ngaka on 072 621 5047 or email on [email protected] Styan said the provincial health department also deployed four additional doctors to assist in Knysna and a 24 hour medical facility has been opened in Plettenberg Bay.

First of the 100 Firefighters ready to go help the people of Knysna #KnysnaDisaster #knysnafires pic.twitter.com/sUx1agiMgc

Additional oxygen masks and cylinders have been provided for medical services in Knysna, Styan said.

Meanwhile, the Southern Cape police urged members of the public to be cautious when sharing false information as it creates “further havoc and chaos” in a situation where resources are already stretched to the limit.

“Rumours and fake news that is currently doing the rounds that two people with petrol cans had been arrested in connection with the fires in George and surroundings, are utterly false and unfounded,” Southern Cape Police spokesperson Malcom Poije said in a statement.

“Further rumours indicating the hijacking of delivery trucks who delivers humanitarian relief packages to Knysna is also untrue.”Seven people were arrested on Friday for looting in Knysna. They are expected to appear in the Knysna Magistrate’s court on Monday.