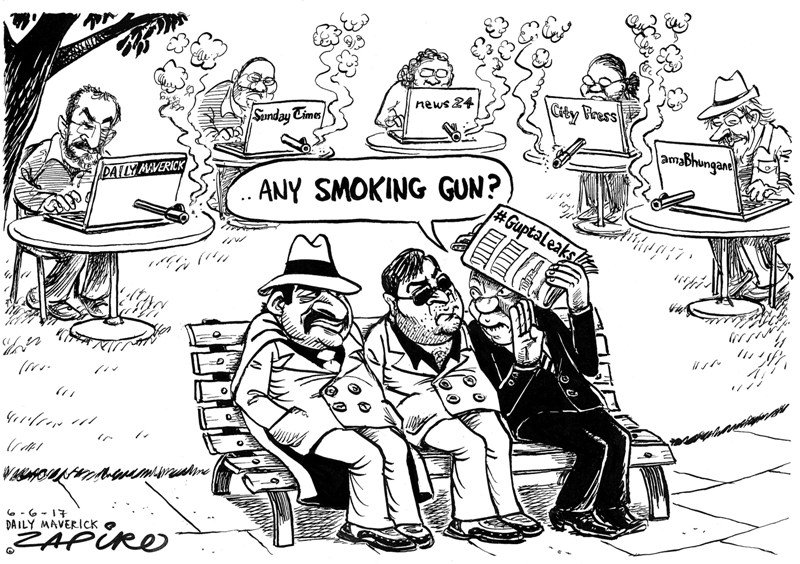 CAPE TOWN — Of the terrible trio at the heart of enabling State Capture, Police Minister Fikile Mbalula, is singled out by international relations fundi Oscar van Heerden as having scraped together just enough credibility to still go after the Guptas. He’s a lot better than the other two comrades in the three P’s; the Public Protector and the Public Prosecutor. You just have to compare their records to realize this. By clinging onto the thread of hope that Mbalula represents, Van Heerden reminds us of the original miscreants, the Guptas, for whom several corporations provided the grease to lubricate Zuptoid deals. While we’ve been probing, exposing marching and protesting – with success in toppling some dirty corporates – the brothers Gupta have gladly faded into the background. This Teflon family have brought the country to the brink, says Van Heerden. Of course, one needs to remember Judge Hillary Squires telling observation in the Schabir Shaik trial – that in order for there to be a corrupter there needs to be a corruptee. Our fearless leader was just getting started then. In a decent democracy, the Gupta brothers would be sharing their bowl of prison slop with Msholozi and a slew of cohorts. Instead, a fall guy spends some token time in prison and emerges, limping, to tee-off again. Is this more of the same? This below piece from Daily Maverick is republished here with permission. – Chris Bateman

It’s official – we have our own Al Capone; no, maybe it’s our own Escobar family. South Africa’s teflon family, the Guptas, can probably withstand Hurricane Irma at this point in our history.

Multinationals fall, they crumble and in some cases have been stripped of industry body memberships – think Bell Pottinger – but the Guptas remain untouched. Why is that?

Since the previous public protector suggested remedial action in the form of a judicial commission of inquiry to deal with issues of state capture, the current incumbent seems not to have given the matter a second thought. The single biggest threat to our democracy is State Capture yet she is dancing with the banks. Why is that?

Then there is my favourite character in our State’s arsenal – Shaun Abrahams, a.k.a. Where’s Wally, a.k.a. our National Public Prosecutor. Despite the mounting evidence of criminality, Abrahams is yet to act. It is as if he is taunting the entire country with his inaction.

Third, there is my good friend, Fikile Mbalula, the Minister of Police. We must give credit here in some respects. The manner in which he dealt with that retiree, Mthandazo Berning Ntlemeza, was appropriate and the fact that he has now also tackled the Richard Mdluli empire, Crime Intelligence, is equally commendable. But don’t stop there, my man, the next step is to shake the very foundation of this teflon family and order their arrest. I’m sure I speak for most when I say that if they are found to be innocent from the potential criminal charges, then so be it. Give justice a chance to prevail.

Not arresting and prosecuting them makes a mockery of the entire justice system in Mzansi.

Bell Pottinger was a huge international PR company that thought it could simply come into my country and treat us like some backward nation, but look at them now. That’s what happens when you come here and think you can simply bamboozle us with racist rhetoric and play to our emotions. The company tried to make small of the sacrifices and hardships we have had to endure over the centuries, just so that it could make millions from the teflon family. Well we showed it, didn’t we.

The scandalised auditing firm KPMG should have stuck to simple auditing rather than getting involved in a political agenda in order to make millions. How disgusting that it would go to such lengths to smear some and elevate others. But it too is suffering the fate of international embarrassment and condemnation.

Then there is McKinsey – the less said the better. I’m not sure if it is sheer arrogance on their part or whether they harbour ideas of the “stupid Africans” and thought, “of course we will be able to get away with it”. I think not!

Yet amid all this falling, apologies and implosions of multinational corporations, the teflon family continues to stand.

Our local and international banks need to be commended for at least taking steps in the right direction, but seemingly nothing else will be happening here at home. The teflon family continues unabated with government contracts. Why is that?

The courts will soon rule on whether President Zuma must appoint the head of the commission, and once that is decided, the inquiry’s work over the coming months will be closely monitored and scrutinised. Our current finance and deputy finance minister will have to make an appearance in order to settle the dust surrounding so many contracts at public enterprises, which will make for interesting hearings indeed.

UPDATE:  Court says it can’t yet order Zuma to appoint commission (you can read more by clicking here).

Never before have we been brought to the brink of banana republic status such as at this time in our history. If we want to dispel this ever growing notion of slipping into the abyss, arresting these three brothers is paramount. They had better be aware – Fikile Mbalula is coming for you.