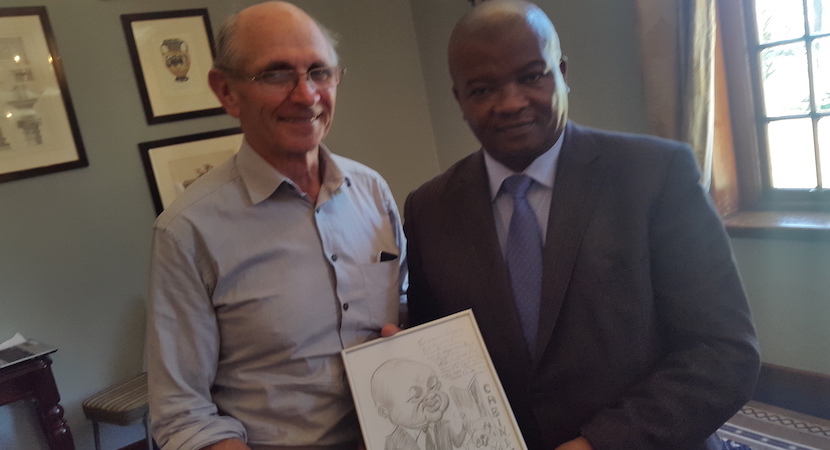 CAPE TOWN — Former Transkei homelands leader, MP and cabinet boycotter, “General” Bantu Holomisa, is worried that incorrectly handled, the alleged Bosasa funding of President Cyril Ramaphosa’s party election campaign, could leave the country rudderless. Guest speaker at the Cape Town Press club this week, he asked who would lead the ANC if the budding scandal caused terminal credibility for a president whose swift actions have single-handedly erased the expiry date of a corruption-riven party. Not that Ramaphosa’s political demise would be a terrible thing for Holomisa’s United Democratic Movement. I have vivid memories of its establishment in Cape Town’s Black townships in 1997 when it was ruthlessly opposed by the ANC with a few aspirant UDM councillors summarily murdered by hired hitmen. Which might explain Holomisa turning down cabinet positions offered to him during Mandela and Mbeki’s tenure. A coalition government is now inevitable he reckons – and the UDM won’t say no to helping out, should voters turn to them in significant numbers. – Chris Bateman

President Cyril Ramaphosa had changed the perception of South Africa in a positive direction after he was elected to the nation’s highest office. There was “positivity” in the country and international investors started to bite again. “But I began to panic when I heard he was a recipient of Bosasa golden handshakes. Imagine if something serious were to happen… if he doesn’t handle the Bosasa issue properly. Who will lead from the ANC side (if he was no longer around)? People were calling for those who had received funds from this company to get the chop. While it appeared that Ramaphosa was willing to answer questions from the Public Protector over the matter, it was clear he was one of the company’s recipients of largesse. “There is too much spin doctoring,” said Holomisa, who said Ramaphosa should answer to parliament on the matter.

South Arica needed an “indaba” for education so the country could thrash out a skills-building curriculum. Holomisa said that under Paramount Chief Kaiser Matanzima, the former Transkei homeland chief,  education in this territory had been of a high standard. Black children from elsewhere were sent to schools and university there. The Eastern Cape had once been “the fountain of education” but was today “struggling”.

Asked why voters should vote for the UDM – described by SA Local Government Research Centre director Clive Keegan as “a party of Holomisa and (newly installed Nelson Mandela Bay mayor) Mr (Mongameli) Bobani, Holomisa said that a party should not be individualised. His party had a track record of fighting corruption. It had focused on dodgy deals carried out by the Public Investment Corporation. This had led to the resignation of its chief executive officer Dan Matjila. It had exposed wrongdoing at the Independent Electoral Commission – hence its chief Pansy Tlakula had been removed. Former Nelson Mandela Bay mayor Athol Trollip had accused Bobani of corruption, but he had never presented evidence of this before the full council of Port Elizabeth or carried out the due processes of proving his case against Bobani. Thus the UDM was now working with the ANC and other opposition parties in the council. He said the Democratic Alliance – which ruled the city for two years until Trollip was toppled – could not dictate to the UDM. “We were told by Trollip that Bobani is corrupt. We said: Mr Trollip please from the UDM’s point of view go and investigate Bobani. Once you find anything (amiss) you don’t have to come to us. Table those findings … in the (city) council. Let Bobani go through the processes (and) appear at the ethics committee. Once the council takes a decision to say… he has done something wrong, then the party (the UDM) can act. We are not going to take instructions from you (the DA). We are never going to take instructions from the DA or for that matter any other party.” Bobani has ruled Nelson Mandela Bay with the ANC since last September when Trollip’s administration fell.

“If you don’t want to vote for Holomisa because he is working with Bobani… then vote for another party. If you talk about UDM… the history of the UDM … is the only party which has been consistent in battling on a wicket of promoting the ethics of good governance. We have single-handedly (exposed) the CEO of the PIC … we did the same for the chairperson of the IEC.”

Asked if he would go back into government if invited by President Ramaphosa to do so after national elections this year, he said he had been asked a number of times over the years to take up a cabinet seat. Presidents Thabo Mbeki and Nelson Mandela had both asked him to join government. “I said no, once bitten twice shy.” His party had held a deputy ministership – a post filled by one of his MPs – during Mbeki’s presidency. If the ruling party fell below 50% at national level, the UDM would not rule out entering into government – but he personally was not interested in such a position. He had already held high office in government – as leader in the Transkei. “You expelled me (the ANC) not because I stole a cent from your movement. I was defending a principle.” He said that he would assist the government on matter of public importance. He had done so when there was trouble in the military during the years of President Jacob Zuma. “You can wake me up any time and I will assist you.” But he was not after a ministerial post. “Remember I have (already) tasted power at the highest level… when I was the head of (the Transkei homeland) government.”

Noting the resignation of the entire board of the Public Investment Corporation – which manages the R2trn strong Government Employees Pension Fund, Holomisa said he welcomed this. He hoped that the new board would exclude political appointments “and ANC cadres”. Asked about the R4.3bn loan to media mogul Dr Mohammed Iqbal Surve’s business, Ayo Technologies, from the PIC, he said: “That matter is under investigation. You are aware that Ayo Technologies have been under scrutiny from the media for the last two years… let us hope that the gentleman in question will be given the opportunity to go and explain or refute the report that was submitted by the head of the internal audit of the PIC. I think I should stop there.”

Pressed on coalition building after the next election expected in May, he said that there was no pre-election agreement. “A party which has more seats (asks) so-and-so can you help us… we have an open mind…. We have worked with the ANC in KwaZulu-Natal in 2004 …. We are working with the ANC in Port Elizabeth. We work with anybody.” He said that the ANC/UDM alliance in Nelson Mandela Bay had been described as a “coalition of the corrupt” by the DA, but that self-same party was hypocritical as it had itself dismissed its Cape Town mayor Patricia de Lille on charges of corruption. “Hypocrisy sometimes needs to be exposed for what it is,” he said.

Asked if he would agree with the description that the UDM had similar policies to the ANC but merely opposed corruption and cadre deployment, he said that was a correct assessment. He agreed that legislation should be put in place to expropriate land without compensation. This should apply to state and private land. This could include unused farms next to squatter townships, he said. He said the economy was still skewed in the favour of the urban elite. “If you want to start your own business in a rural area… you need access to the internet, water and electricity. That is the responsibility of the government.” There was plenty of money in the country but much of it had been wasted on arms deals and corruption.