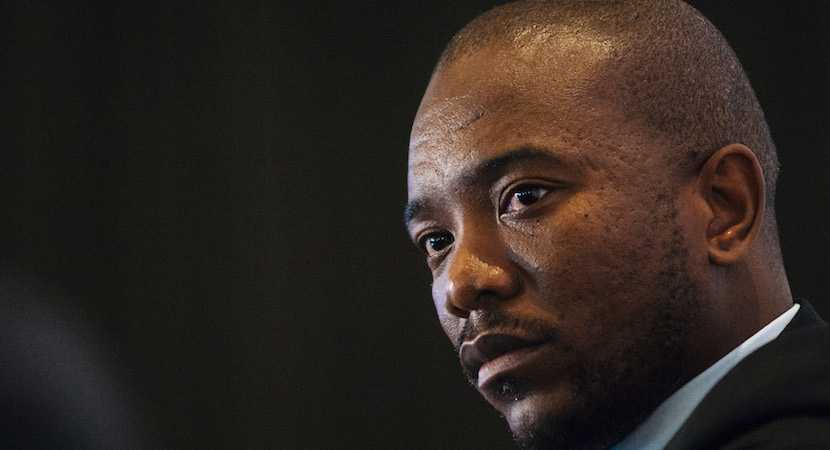 CAPE TOWN — The bottom line in the opinion of legal eagle Paul Hoffman on the Constitutionally-required independence of corruption-busting bodies? The leaders of the main political parties and their manifestos cannot be trusted to ensure this – and the main opposition party, the DA, has got it wrong. Hoffman, Director of Accountability Now, makes a convincing case for the DA to revise its position on what’s required to put South Africa back on the straight and narrow without political interference. He highlights why, in his opinion, the DA manifesto is fatally flawed and compares it with some puzzling and contradictory assertions made by DA leader Mmusi Maimane. By comparison with Maimane’s clear declarations, the DA has since gone manifestly soft on the clean slicing necessary to separate the Zuptoid-polluted NPA and police from such an essential body. It’s a fascinating exposition in which Hoffman gives the exact contradictory wording in Maimane’s speech and the DA’s subsequent manifesto. The fatal flaw? Putting explicit trust in a “tweaked” NPA unit and the police when everyone knows that replacing the odd leader is not enough to fumigate the houses and prevent obfuscation, prosecutorial delay and sabotage by Zuptoids. Meanwhile, the orange overalls stay in the cupboard. – Chris Bateman

In August 2017 Mmusi Maimane, leader of the opposition, addressed the Cape Town Press Club in a wide ranging speech that touched on the DA’s policy in respect of countering corruption. He spouted a lot of codswallop about creating more Special Investigative Units or SIUs. As all sentient South Africans know, the SIU, any SIU, is only as good as the president allows it to be as its workload is set and controlled by him. The Constitutional Court has unequivocally ruled that the anti-corruption machinery of state should be free of executive control, influence and interference. SIUs are accordingly not appropriate vehicles for anti-corruption work, especially so when state capture or kleptocracy of any kind is involved.

It was accordingly a refreshing change for the better to read in the columns of Biznews in October 2017, that the DA’s position was not that punted at the Press Club do.

This is how the readers of Biznews were reassured by the self-same Maimane:

“The DA has some big, bold ideas to win the war against corruption.

For one thing, South Africa needs a new and powerful independent commission dedicated to fighting corruption – a kind of Scorpions on steroids. It must have a high level of independence – it cannot be answerable to the executive. Candidates for leadership must be short-listed by Parliament and then appointed by the Judicial Services Commission, based on competence, experience and ethical conduct.

This corruption-busting unit must be well resourced, and have comprehensive powers to investigate and prosecute. It must have a 24 hour corruption reporting centre where people may anonymously report corrupt activities in either the private or public sector. The DA would enforce a minimum fifteen year sentence for those found guilty of corruption.”

The DA’s ideas, as set out in the passage quoted above, are largely based upon the binding rulings of the Constitutional Court in the Glenister litigation and reflect the fealty to the rule of law which the party, very properly, professes.

It accordingly comes as something of a disappointment that the manifesto of the DA clearly discards the “big bold ideas” in the post-Gwen Ngwenya policy-making era, and instead dishes up a solution that has no hope of succeeding. Certainly not with the Hawks fully captured (and by-passed  by the Ramaphosa administration in its not so Special Tribunal proposal and not even considered for the even less special NPA state capture investigative unit) and the NPA dysfunctional in its anti-corruption efforts due to its partial capture by those intent upon “repurposing” the state to their corrupt ends.

Here is the relevant part of the DA manifesto; read it and weep:

The officers investigating crimes have to be fearless and incorruptible. The institutions they serve must also be free of undue influence or control from government or politicians. In addition to the measures aimed at countering corruption, the DA will also, in line with the Glenister Judgements, establish a new unit to replace the Hawks with the requisite specialisation, training, independence, resources and security of tenure as demanded by the Constitutional Court. The structure of this new unit should be based on the erstwhile Office for Serious Economic Offences, with cognisance of the Serious Fraud Office in the UK and the Singapore model. The unit should comprise of investigatory arm, staffed and led by SAPS members and a prosecutorial arm, staffed and led by specialist NPA members. The reporting lines for the head of each arm should be to the police commissioner and the National Director of Public Prosecutions (NDPP), respectively. The unit as a whole should be answerable, through the NDPP, to Parliament. The current Specialised Commercial Crime Unit within the NPA could very easily be tweaked to accommodate such a structure. It already has some prosecutorial expertise in this specialised field. It already co-operates with the Commercial Branch of the SAPS in the investigation of this genre of cases. Additionally, until such a time as the requisite specialisation is achieved, forensic consultancy services could be procured by the unit to expedite priority cases. The new unit should, as far as is possible, have an independent budgetary process and be removed from executive control”

The big bold ideas set out by its leader in October 2017 have been replaced by what appears to be an ill-considered mish-mash compromise, worked out in a smoke-filled back room of DA HQ in which relevant knowledge, light and oxygen were conspicuously absent. It is a policy that hankers after 20th century solutions to what is clearly a huge 21st century problem for SA. Grand corruption is a malaise, which if not addressed soon and comprehensively will, in the words of the Chief Justice: “graduate into something terminal”. There is no need to tour Hong Kong and Singapore, our own highest court has told us what we need for effective, efficient and adequately independent corruption busting.

The DA owes the electorate in general, and its supporters (whether or not they hold their noses while voting) in particular, an explanation for its backsliding on its big bold anti-corruption ideas of 2017. The retreat from the constitutionally and legally sound attitude set out in the first quote above to the wishy-washy position taken up in the second is logically inexplicable. The notion that police are capable of being free of executive control is untenable in our constitutional dispensation. Given the levels of corruption within the police, it is not the decision of a reasonable decision-maker in the circumstances, to involve any police personnel in the hard and specialised work of preventing, combating, investigating and prosecuting grand corruption.

The NPA has many Zuma deployees hiding in its ranks. Identifying them and weeding them out will take years; years in which the effectiveness and efficacy of the NPA as a corruption busters will be questionable at best and absent at worse.

A new commission, the Integrity Commission, housed in Chapter Nine of the Constitution is the obvious best-practice solution to the issues around grand corruption. Why the DA would want anything less is hard to divine. It knows the courts require a specialised, trained and independent unit. One that is properly resourced in guaranteed fashion and which enjoys security of tenure of office. In short, what is required is the Scorpions of old on the steroids of the protection of their security of tenure of office, the only one of these five “STIRS” criteria which the original Scorpions lacked. The chink in their armour enabled the Zuma faction to dissolve the Scorpions; had they been a Chapter Nine Institution this expedient would not have been available to anyone unable to muster 66.6% of the votes in the National Assembly.

Is the DA punting a policy which it hopes to sell to the ANC perhaps? Is it getting ready for a coalition with the ANC? Does the DA recognise that the criminal elements in the ANC, who have converted a once proud liberation movement into a gang of corrupt and compromised money grubbers, will not support any effective anti-corruption policy? Has the DA sacrificed its big bold anti-corruption ideas on the funeral pyre of political expediency? Sensible voters will want answers to these questions.

Although far less specific than the DA policy, the take of the EFF on corruption is instructive:

“The EFF government will introduce a minimum sentence of 20 years for all public representatives and servants convicted of corruption.

The EFF government will protect the independence of the Public Protector, the Auditor General and all other corruption monitoring institutions to independently oversee government programmes.

The EFF government will introduce legislation preventing all public representatives and public servants from doing any form of business with public institutions.”

Although the EFF does not directly address the need for an Integrity Commission, its promise to protect the independence of all “corruption monitoring institutions” holds more promise than the DA manifesto which surrenders the much needed independence without a fight.

The IFP has embraced the idea of an Integrity Commission and has sought a debate on the topic in the National Assembly. Other smaller parties do not have an expressed position that is easily accessible. Their professed allegiance to the rule of law ought to have all parties supporting the establishment of an Integrity Commission to deal a fatal blow to the corrupt through the work of preventing, combating, investigating and prosecuting grand corruption.

There is still time before the elections for the DA to repair its reputation by reverting to its 2017 position. It could also profitably remind voters that the ANC administration is stealing the public blind by allowing kleptocracy, grand corruption and state capture to continue without effective and efficient investigation and prosecution of a single “big fish” from the ranks of the corrupt since the Scorpions were closed down ten years ago. Their work on Jackie Selebi and John Block paid dividends, but nothing similar has seen the light of day during the wasted Zuma years or since then either.

The culture of impunity abroad in the land will not be reversed by the implementation of the DA manifesto; the best practice solution to the challenge is required. Voters deserve nothing less and they certainly won’t get it from whichever faction of the ANC wins through on 8 May and in the National Assembly when a new president is elected at the first sitting of the next parliament.

Instead of tolerating grand corruption, voters should insist that the party they vote for adopts a policy that properly implements the findings of the Constitutional Court in the Glenister cases. The DA showed it  knew how in 2017. The current circumstances in SA do not accommodate any role for the SAPS or the NPA in corruption busting. Both are too compromised by the ravages of the Zuma years to be trusted to do the job required. A new broom that sweeps clean is needed badly. It could be called the Integrity Commission. The draft legislation needed for its establishment as the premier anti-corruption unit in SA is on the Accountability Now website’s Glenister case page. Anything less won’t do.