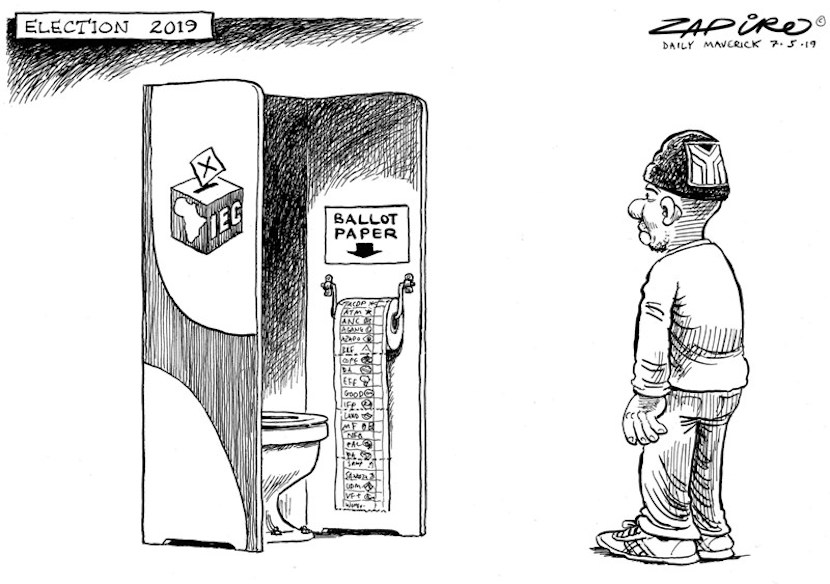 JOHANNESBURG — What if one looked at the recent general election like a football league. You have supporters who’ve grown up to love a particular team, and when they’re on top, everything is fantastic. The ground is packed to the rafters with fans, social media is abuzz, and things are ‘hunky dory’. But what happens when the team hits a rough patch, results and decisions go the other way, problems in the camp surface and the enthusiasm levels drop. It’s not like you stop supporting the team, but less fans start to show up at the games, and the stadium starts to empty… Now if one looks at voter turnout, it starts to make sense. There’s voter fatigue globally, and with South Africa’s young democracy, sadly the 65 percent voter turnout fell into the global average. But those not voting don’t necessarily change their minds, they just don’t show up at the polls because there’s no one else to vote for. But at the end of the day, the result stands, the ANC got a 57% majority, regardless of who showed up. Cyril Ramaphosa will lead the country for the next five years, and if he does a good job, one may see those that failed to turn up this year, reappear, and if it’s a bad job, well… We must remember that politics is a world where opinion trumps reality, as Riaan de Villiers explores below. – Stuart Lowman

The 2019 national and provincial election elections have come and gone, leaving us all to face the consequences. The media have spread the message that the ANC has won the national election with a 57% share of the vote. While lower than its 62.15% in 2014, which is taken as a cause for concern for the ruling party, this is still widely described as a ‘solid majority’, and a ‘strong mandate’ for Cyril Ramaphosa.

On Saturday evening, in a graceful and non-partisan speech at the IEC election results centre, our returning president, Cyril Ramaphosa, described the election as a ‘resounding expression of the will of the people of South Africa’, which had ‘reaffirmed the vibrancy of our democracy’.

All this has helped to bolster the impression that the ANC has won the support of more than half of the South African electorate. This is a big, and ultimately dangerous, illusion.

If the voter turnout of 65.9% is taken into account, the ANC’s ‘share of the vote’ drops to 35%. And if the registration rate of 74.5% is added, it plummets to a dismal 27.9%. Put differently, the ANC now governs with the active consent of little more than a quarter of the South African electorate. Added to this, eligible voters who did not vote outnumbered those who did (for all parties) by more than a million. Put differently, more than 18 million eligible voters – more than half of the electorate – did not even vote.

This sort of slippage takes place in all representative democracies with voter registration and voluntary voting systems. They are routinely analysed as indications of the waxing and waning of political participation, as well as support for particular political parties. But rates of registration and turnout rates in mature and stable democracies tend to be far higher, and don’t really threaten those systems themselves.

By contrast, what is at stake in South Africa is not just the level of consent with which the ANC will govern the country for the next five years, but the legitimacy of its ‘young and fragile’ democracy. And the alarm bells are ringing loud and clear.

Given the fluidity and uncertainty surrounding the 2019 election, votes have probably been lost across the political spectrum. However, the bulk of votes have certainly been lost among members of deprived communities, stuck in the bottom half of what is now the most unequal society in the world.

People in those communities are not only disillusioned by the lack of progress by their former parties of choice – notably the ANC – over the past 25 years, but have also lost the belief that the ANC or any other government could or would do anything about it in the future.

Many of them are younger people who see no point in entering the formal political system. More specifically, they have given up hope of receiving a worthwhile education, and ever getting a formal job. (Indeed, it was heart-breaking to watch the faces of young people expressing their disillusionment on some of the better vox pop TV broadcasts in the run-up to the polls.

This precipitous drop in the legitimacy of our democratic system hidden in the latest election results should come as no surprise. Besides continuing a steady trend over previous elections, it also occurs in inverse lockstep with a growing phenomenon that our politicians have desperately tried to ignore for several years, namely the rapidly growing number of poor communities – arguably the people who require the most effective governance and the best service delivery – that routinely express their political demands by means of violent protests, defying state agencies and destroying public property and infrastructure in the process. To state the obvious, this is not meant to happen in a well-functioning democracy. Their sense of being effectively represented by either local, provincial or national political representatives is clearly close to zero.

The ease with which we can lapse into a fundamental misrepresentation of the election results, the ANC’s ‘mandate’, and the legitimacy of the democratic system is illustrated by Ramaphosa’s address at the IEC election centre of Saturday night.

Interestingly, he avoided any direct reference to a mandate by a majority of the electorate. Instead, in what seems to be a careful choice of words, he paid tribute to the ‘millions’ of people who went to the polls to choose the public representatives who would champion their collective interests, and the ‘many’ people who had braved the rain and cold to cast ballots that would determine the country’s future.

He did refer to the low levels of participation by young people. He started by applauding those young people who had participated in the elections, and the way they sought to encourage others to do so on social media. Departing from his written address, he went on to say: ‘We should be pleased that young people are taking such a keen interest in the life of their country. We do however need to say that we want that keen interest to keep growing. Because many more young people are still outside the fold of voting activity. And we want them to participate far more than those who have participated now.’ So he did flag this as an issue, but in an avuncular, dumbed down sort of way.

He then went on to declare: “Our people have spoken – and they have done so clearly and emphatically… I thank all of you for making it possible for this election to be a resounding expression of the will of the people of South Africa… We can declare with certainty that democracy has emerged victorious.’

Well not really. If the people had spoken, they had largely done so by staying away from the polls. If the election was a ‘resounding expression of the will of the people of South Africa’, it largely expressed their loss of confidence in the democratic system. So the election can’t really be regarded as a victory for democracy. On the contrary, even in strict numerical terms, the electorate has actually delivered a vote of no confidence in our democratic system.

In an end-of-election message on its website, the ANC declared: ‘South Africans have given their vote of confidence to the ANC to continue to lead transformation and government to speed up the process of building a better life for all.’ To the extent that this is meant to imply that a majority of voters had done so, they have done no such thing.

It‘s a striking illustration of the sleight of hand aimed at perpetuating the myth that the ANC has a mandate to govern from the majority of the South African electorate.

Everybody was tired on Saturday night. The president’s speech was a ceremonial one, and he might not have written it himself. In one of his off the cuff asides, he suggested that, having done a great job, journalists could take some time off and get some sleep. It raised a good laugh. He clearly seemed to be in need of a good sleep himself.

One can only hope that, after having had one, the president, members of his party, and indeed all the other members of the cosy new political elite who were on view at the IEC’s closing results ceremony, will set about addressing challenges posed by the real results of the 2019 elections with greatly renewed energy, and a greater sense of urgency.