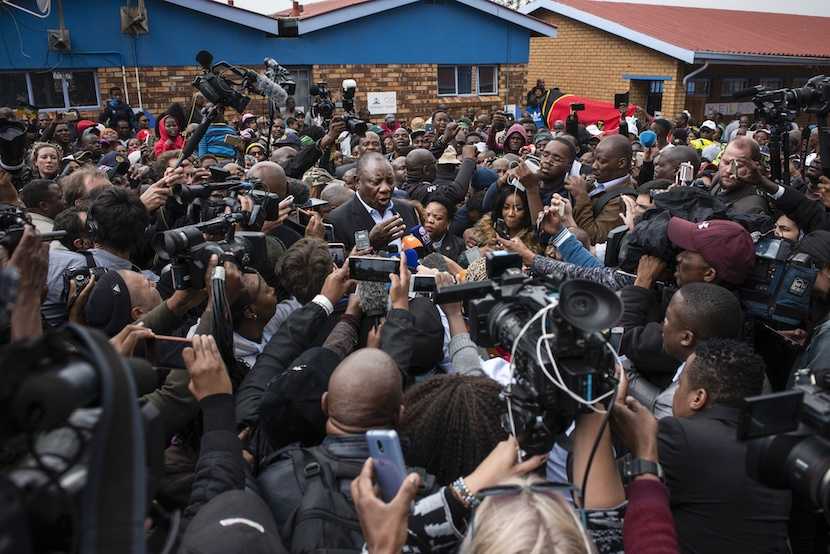 CAPE TOWN — Cyril Ramaphosa has played his hand and quaffed his ‘closure’ whisky at the Last Chance Saloon. And emerged victorious, saving his party from a gradual, four-election slide and eventual electoral ignominy. Now he faces a nation praying he’ll take on the Zuptoids in his party-midst, his senior comrades deeply sobered and grateful in the certain knowledge that without Cyril, the party would have continued its inexorable decline. Perhaps the ANC’s head of elections, Fikile Mbalula, put it best; “If President Ramaphosa did not (narrowly) win at the party’s 2017 Nasrec conference, the ANC’s support would have sunk to 40% in these elections,” he asserted, describing the Nasrec victory as a ‘game-changer’ for the party. It’s the first time the ANC’s support in an election has dropped below 60%, a thorough voter reprimand for its larceny during President Jacob Zuma’s rule. People have gone with the new sheriff in town, buoyed by his showdown with the despotic but charismatic leader for whom either ignorance or greed (or perhaps both), put a bullet in his boot. It wasn’t the showdown actually, but the boundary-riding and fence-mending Cyril’s done since. Now to round up the bandits and tame an impoverished Wild West. – Chris Bateman

(Bloomberg) – South Africa’s African National Congress has extended its quarter-century grip on political power and it largely has President Cyril Ramaphosa to thank for halting its decline.

The ANC won 57% of the votes cast in May 8 national elections, official tallies from 81% of the voting stations show. The party looked to be in danger of losing its majority when its support slipped to a record low of 54.5% in municipal elections three years ago, as many of its supporters boycotted the vote in protest at then-President Jacob Zuma’s immersion in a series of scandals.

Ramaphosa won control of the ANC in December 2017 and became president two months later after the party forced Zuma to step down to stem a loss of support. Since taking office, he’s named a new chief prosecutor, instituted several corruption inquiries, fired several top officials implicated in wrongdoing and pledged to ensure that those responsible for looting state funds will be jailed. His public approval rating stands at 65%, a survey conducted by research company Ipsos before the election shows.

JUST IN #ElectionResults ANC SG Ace Magashule has just said President Cyril Ramaphosa can’t take credit for the party’s win. I asked him if he agrees with people that Ramaphosa helped the party. His response “he is not candidate premier,it’s not about individual, it’s about ANC”

“Ramaphosa’s popularity, particularly among constituencies that were deserting the party under Zuma, appears to have played a major role in convincing voters to give the ANC another chance,” said Mike Davies, the founder of political-advisory company Kigoda Consulting. “Ramaphosa’s promises to address corruption, jobs and inequality have resonated amid ongoing voter skepticism of what opposition parties offer.”

The partial tallies show the main opposition Democratic Alliance winning about 21.8% of the national vote, a small dip on its share five years ago, and the populist Economic Freedom Fighters 10.1%, a 4 percentage point increase. Final results are due to be released by Saturday.

The likely margin of the ANC’s election victory is within the range anticipated by most analysts and has buoyed financial markets, with Ramaphosa now expected to implement structural reforms to revive an economy that has expanded by less than 1.5% for the past four years. The rand gained for a fourth straight day against the dollar on Friday, advancing 0.9% to 14.2123 by 11:10am in Johannesburg.

The key issue yet to be decided is whether the ANC retains control of the Gauteng province, which accounts for a third of the nation’s gross domestic product, and includes Pretoria, the capital, and the economic hub of Johannesburg. The ruling party lost both cities in 2016, with the DA taking control with support from smaller parties. The latest tallies show the ANC had secured 49.6% of that provincial vote with about 60% of the vote counted. The DA retained control of the Western Cape.

Ramaphosa, 66, is an accomplished politician. He founded what was the country’s biggest labour union, helped negotiate an end to white minority rule and draft the country’s first democratic constitution. He built up a fortune in business after losing out to Thabo Mbeki in the race to succeed Nelson Mandela as president in 1999. Ramaphosa returned to full-time politics in 2012, when he won the deputy presidency of the ANC, and took the top party post after fending off a challenge from Nkosazana Dlamini-Zuma, Zuma’s ex-wife and favoured successor.

With Zuma allies securing a number of other top party posts, Ramaphosa’s hold on the ANC looked tenuous and there was speculation that a bid could be made to topple him at the party’s next elective conference in 2022 – a scenario that now looks unlikely given the ANC’s electoral victory.

“President Ramaphosa is safe as head of the ANC,” Fikile Mbalula, the ANC’s head of elections, said in an interview. “The party has done well, especially after the doldrums we were in before the elections.”

Ramaphosa saves the ANC’s bacon. But this could be its last chance

The African National Congress (ANC) will govern South Africa for another five years. But this sixth victory of the democratic era since 1994 was hard-won. For the first time in a national election its share of the vote dropped beneath 60%. This suggests both a normalisation of South Africa’s electoral landscape and an increasingly competitive multi-party democracy.

On arrival at the national results centre in Pretoria on Thursday, with around 60% of the votes counted, the party’s chair Gwede Mantashe expressed his anxiety to me about the outcome: “We need 60%”, he said.

I responded by saying that the evidence suggested the ANC was heading for 57% or 58% and that this represented an upturn of their fortunes after the dramatic dip to 54% in the 2016 local government election. It was, I said, therefore a very good result. He appeared to accept my logic. Mantashe is a supporter of President Cyril Ramaphosa and is currently the minister of mineral resources.

The pivotal issue for Election 2019 was whether the outcome would give Ramaphosa more political space within the ANC to drive his reform programme forward. Since he ousted Jacob Zuma from power in February 2018, having won a very tight race to succeed Zuma as leader of the ANC at its five-yearly national elective conference the previous December, Ramaphosa has begun to execute a complicated turnaround strategy.

But the job is half done. So far he’s appointed several commissions of inquiry to expose the rot of what he called “nine lost years”. This paved the way for the appointment of competent, honest men and women to lead key state institutions such as the SA Revenue Service and the National Prosecuting Authority that had succumbed to the Zuma-enabled project of “state capture”.

Yet the Zuma faction within the ANC has not been vanquished and so Ramaphosa has had to drive with at least one eye on the rear-view mirror. His own party has been a drag factor. Would Election 2019 deliver a sufficiently big victory for Ramaphosa to shake them off?

Some have argued that were the ANC to win 60% or more in this election, it would have given the party a blank cheque for further larceny. But a below par score beneath 56% would have weakened Ramaphosa and provided ammunition for his opponents within the party to attack him and undermine reform plans. These include the much-needed unbundling of the state-owned power utility, Eskom, which represents a major risk factor for South Africa’s sluggish economy and its beleaguered public fiscus.

A 57% or 58% outcome for the ANC could arguably represent an ideal outcome for the country. The people would have reprimanded the party for its reprehensible conduct over the last decade and, as many of its leaders were conceding yesterday, its failures to deliver good public services. At the same time it would give Ramaphosa the opportunity to claim a victory and, thereby, the fresh mandate he needs.

This indeed appears to have been the outcome.

More popular than his party for the first time since Nelson Mandela in 1994, and more trusted than the leaders of the opposition, Ramaphosa can claim to have saved the ANC’s bacon.

How the opposition fared

Election 2019 was also a referendum on South Africa’s appetite for the sort of populist politics that has prospered around the world in recent years. The local version is Julius Malema and his militant Economic Freedom Fighters (EFF).

The exponential growth that the party promised on its campaign trail has proved elusive. The six million young (18-29) people who chose not to register to vote certainly represent a potential untapped market for Malema, to build on the 1.5m or so who voted for the EFF this week. But for the time being South Africa has rejected a populist alternative in favour of more of the devil it knows.

The biggest opposition party, the Democratic Alliance (DA), had a very poor election. It lost votes from its right flank to the Freedom Front Plus – an Afrikaans party – and failed to gain them from the middle ground. As a result, overall it has stagnated. Its share of the vote overall may even drop – despite the fact that the conditions for challenging the ANC were so conducive.

Questions will inevitably be asked of the DA’s leader, Mmusi Maimane. Was he tough enough to cope with the existential ambivalence that undermined its ability to define a clear value proposition to the electorate?

The DA had hoped to add to its progress in the local elections in 2016 when, with the help of the EFF, it drove the ANC out of city hall government in Pretoria and Johannesburg. Both fall within the Gauteng province, South Africa’s economic hub. In the national poll the DA appears to have failed to prove its case in the region where the ANC looks set to hang onto its majority – albeit by its fingernails.

The ANC’s domination has been in decline since 2009. In four successive national and local government elections since Zuma entered office that year, the ANC’s share of the vote has fallen.

The party’s leaders know it, but find it hard to accept. As Mantashe moved on from my conversation he turned back for a second:

The ANC’s ego may not have been stroked by South Africa’s electorate on this occasion. On the contrary, it has fired a shot across the bows of Nelson Mandela’s party. A quarter century after Mandela became South Africa’s first black, democratically elected President, the ANC’s hold on power has weakened. Now it must continue to cleanse the body politic of the contamination of the Zuma years.

Ramaphosa will need to use the victory to turn the reform platform he has built over the past year into a springboard for economic growth and job creation. Both are urgently needed.

Otherwise, the lesson of Election 2019 is clear: next time the electorate will say enough is enough and turn away from the ANC.