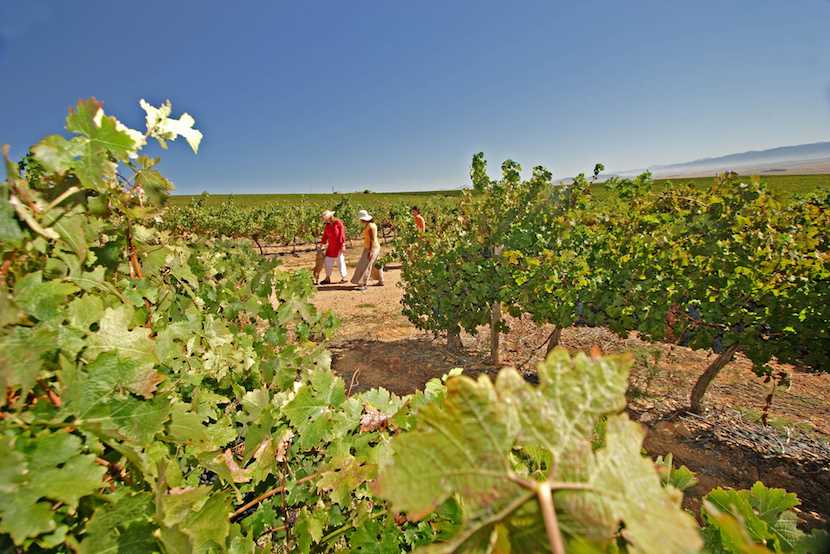 There is no doubt that the government’s plans to expropriate land has, as Chuck Stephens from the Desmond Tutu Centre for Leadership puts it, “created a situation.” It is pitting those who provide our food against the Government and the Economic Freedom Fighters in a protracted battle that will have few winners. Once you start meddling with the Constitution: it could open a Pandora’s box of evils that weakens the only instrument that stops excessive abuse of power. The economy will suffer and investors that are so sorely needed will stay away from our country. So how do you solve the problem of land in South Africa without the collateral  damage; is there another way? Stephens thinks there is; he quotes Pope Francis who said that “when the cup stops running over – you have to shrink the cup”. Like the Giving Pledge that billionaires, Bill and Melinda Gates, Jeff Bezos and Warren Buffett signed up to; he suggests that land owners should agree to share or give away parts of their farms, voluntary. There are several reported cases of farmers in South Africa who have done that and of farmers who have reached out and have been instrumental in helping black farmers to cope. His other idea of a constitutional amendment to include the “right to work” may be more difficult to achieve. – Linda van Tilburg

Join us on our Journey to Justice

The Lowveld finally has an ice hockey team – the Razorbacks. Of course they play on artificial ice, because there is no way you will ever find natural ice here. We have a climate like Miami or Los Angeles, both of which have ice hockey team in the major league. I should also mention the Coyotes of Phoenix, Arizona – owned until recently by former player Wayne Gretsky. In Canada, the home of ice hockey, he is known as “the Great One”. He still holds about 60 NHL records, from the time that he was a player.

How does one rise from a hockey player to team owner? Well one chapter in his bio is very interesting. As Gretsky began to excel and break one record after another, he got uncomfortable with the contract that he was locked into with the Edmonton Oilers. Team owner Pocklington made a daring move. Basically, he scrapped the existing contract, and asked Gretsky what he wanted. The Great One was highly motivated by opportunity – he went on from strength to strength. I was reminded of this contract upgrade recently when I heard of a commercial situation in Belgium, in 2009…

Two parties in Europe’s free trade zone had signed a contract related to steel production. Soon after their contract was concluded, the price of steel skyrocketed due to market fluctuation. It turned out to be a bad deal for one of the parties, which wanted out. So they went to court to have the contract annulled – on the basis of “hardship” and excessive economic conditions. The Vienna Convention did not have any rules of “hardship”. So they made their case in Belgium’s supreme court by referring to UNIDROIT, which does have rules on “hardship”. And they won. This set a significant precedent, because no case based on “hardship” had ever been won as a remedy in Belgium before. It sounds a bit holy: “Forgive us our debts, as we forgive our debtors”.

Read also: Smell the roses and build on the good stuff – Chuck Stephens

Speaking of holy, what about Pope Francis’ Evangelii Gaudium (apostolic exhortation), in which he says that a State must guarantee WORK, education and health care for all citizens? Few would disagree that all citizens have a right to education and health, in one form or another. But “work”? At the time that our Constitution was being drafted, the Evangelical Fellowship of South Africa made a representation saying that the “right to work” should be included in the Bill of Rights. It wasn’t.

My sense is that while amending the Constitution to expand the State’s right to expropriate land without compensation, it should also amend the Bill of Rights to include the “right to work”. In a country with 29 percent unemployment (even higher among youth) this issue has to be given the force of a violation of rights.

Pope Francis remarked that when the cup stops running over, you have to shrink the cup.

I think that’s what the Giving Pledge does. The billionaires who promote it are telling millionaires to give away 50 percent of their wealth. In their own language, they are saying “shrink the cup”.

We have a situation. Most of the farmland in South Africa belongs to whites. I will not get sidelined into an argument over statistics. It is true that the exact proportions are difficult to measure. But let’s take the worst case scenario – that could be exaggerated? That is, that 72% of farmland is owned by 35,000 commercial farmers (in a country of 55 million people). Yes, they do employ 740,000 citizens (in an active work force of 9 million tax-payers). And they are to be thanked for our national Food Security, indeed. And they contribute 2.5% of our GDP – which is also disproportionate when you think of it. But nevertheless, these proportions are unsustainable.

Read also: Can Thoko Didiza satisfy all sides in the crucial juggling act on land reform?

There is no getting around the fact that winds of change are blowing again. It happened in Russia, long before the Bolshevik revolution. The feudal system was being dismantled, under which only aristocrats owned land. Serfs worked for their masters – a variation of slavery. As Russia came out of that era, “peasants” or subsistence farmers emerged. They farmed their own parcels of land. But from time to time, they also had to “repartition” their land – to make room for more landless people. There is no evidence that this caused a dip in food production.

The crash in food security came along under Lenin and Stalin. Their collective farms were an unmitigated disaster. As many as 30 million Russians may have died of starvation – not because of drought, but because of detrimental policy.

Having said that, before the Bolsheviks took over, communes were not unknown in Russia. Just like the kibbutzim in Israel that came later, these functioned very well in the overall mix, and there is no evidence that food production dipped when communes took over parcels of land. Unfortunately, critics of Land Reform tend to have a selective memory problem – they remember the collective farming of Lenin and Stalin, which ended up bankrupting the USSR. They forget that communes did and can contribute effectively to food security, as well as “peasants”, as well as the family-farm model that dominates South African agriculture.

I remember when (under glasnost, or was it perestroika?) Gorbachev was given a tour of the mid-western USA. He later admitted that when he saw the productivity of those farms, on that visit, he realised that the USSR was doomed.

We have no choice. We have to “shrink the cup” in South Africa. It is a moral imperative. We have to tear up the contract that was given to our youth – on the basis of “hardship” – and replace it. We just cannot leave them demoralised and stranded. We cannot let classes start to form, that is un-democratic.

Please visit our Jubilee Land Bank web page for some deeper reading. Our concept is neither “Left” nor “Right”. It is not ideological, it is pragmatic and it is biblical. Amending the Constitution will take time. Then there may be court challenges, etc. – more time. Meanwhile, Rome is burning. Our proposal can work before and after the Constitution is amended. It can add value to a process that has gone far too slowly in the first 25 years of Democracy. God help us to do what is right.