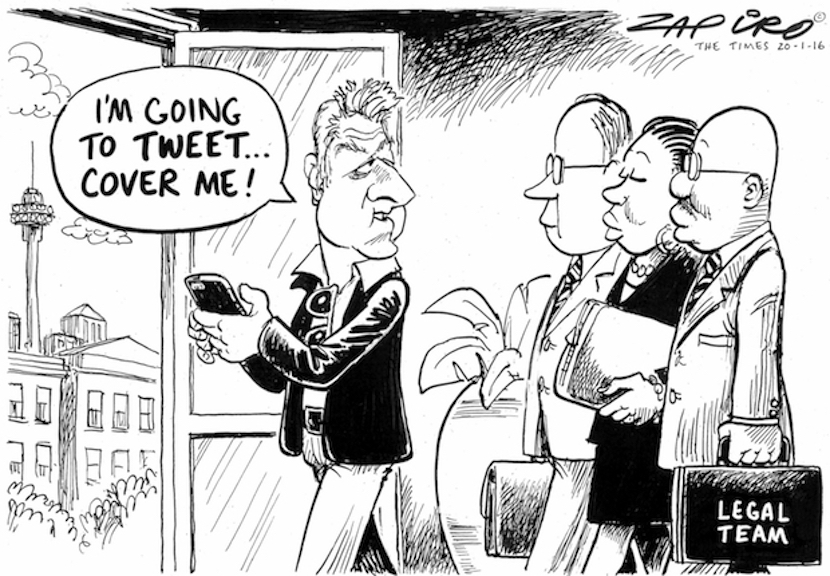 Phumlani Majozi belongs to South Africa’s sizeable black middle class whose growth and existence he says is proof that Blacks can and do rise through South Africa’s economic system. So, when he sees ‘woke’ attacks on a journalist quoting reputable survey findings that racism is low down on the list of voter priorities and the gross failure of service delivery concerns most, he gets angry. A senior fellow at African Liberty – a media platform for advancing individual freedom, peace and prosperity in Africa – Majozi leapt to Gareth Cliff’s defence after Nando’s withdrew sponsorship of his radio show, The Burning Platform last week. Cliff was facilitating a debate between Mudzuli Rakhivhane of the One South Africa (OSA) Movement and John Steenhuisen of the Democratic Alliance (DA), focusing on their widely differing approaches to voters in the dying days of the hustings. Rakhivhane was saying why it’s important to support value-driven independent candidates and predictably, Steenhuisen, the very opposite. Cliff pooh-poohed her highlighting ongoing racism, continually returning to the survey findings. She ended up offended; Steenhuisen, triumphant. If their individual truths are valid and not mutually destructive, did Cliff stumble? Not easy, challenging wokeness while staying sensitive to a lived experience of race and gender. This article was first published on Politicsweb. – Chris Bateman

John Adams, was the President of the United States of America (USA) from 1797 to 1801. He once remarked, “Facts are stubborn things; and whatever may be our wishes, our inclinations, or the dictates of our passion, they cannot alter the state of facts and evidence.” How true, from President Adams.

You see, facts can unsettle us. They challenge our value system and tolerance often. Many people in South Africa and around the world fail the tolerance test, sadly.

For much of modern history, democracies have been largely characterised as tolerant societies. Especially the advanced Western democracies.

But now a serious scourge has fallen upon such democracies around the world. This scourge is widely known as “cancel culture”. Dictionary.com defines cancel culture as “the popular practice of withdrawing support for (canceling) public figures and companies after they have done or said something considered objectionable or offensive. Cancel culture is generally discussed as being performed on social media in the form of group shaming.”

The victims of this cancel culture are ostracised, demonised and their livelihoods and reputation destroyed.

The latest popular person to be demonised and called “racist”, for stating facts and the truth, is South Africa’s media personality Gareth Cliff.

In an interview with Mudzuli Rakhivhane of the One South Africa (SA) Movement and John Steenhuisen of the Democratic Alliance (DA), on his show The Burning Platform last week, Gareth correctly argued that racism is not an issue in these upcoming local government elections. That service delivery is front and centre as South Africa’s municipalities are in a dire state. He dismissed Mudzuli’s view that racism is an issue in these elections and in South Africa in general.

To any sensible, rational South African, Gareth’s argument that racism is not an issue in these elections was on point. Mudzuli was playing the usual identity politics.

Where polls have been conducted to understand whether racism is of great concern to South Africans, the answer from respondents has been largely a “No”. Racism is at the bottom of the list of people’s concerns. The South African Institute of Race Relations has conducted these polls.

Gareth was brave to speak the truth and facts in a country where victimhood and falsehood are widespread. He deserves our praise and support. Very few people are courageous to tell the facts in South Africa.

Politicians, along with the media, have been very effective in propagating the false narrative that where black people have made miniscule progress, it’s because of white racism. That it’s because of racism that income inequalities between blacks and whites persist. These claims are all rhetoric; there is no evidence to back them up.

That white people earn more does not automatically mean that the system is rigged by white racists against black people. There are many factors that contribute to inequalities in wealth creation between various groups, or between people. Amongst these factors, the most significant are human capital, and behaviour.

Some practices, or behaviours, subject people to prolonged poverty. While other practices uphold the primacy of education and wealth creation.

The increase in the size of the black middle class over the past 27 years of our democracy, in spite of bad economic policy, is proof enough that blacks can and do rise through South Africa’s economic system.

If you think that you are safe in this cancel culture, think again. Just months ago, these intolerant mobs wanted to cancel South Africa’s former Chief Justice Mogoeng Mogoeng, for his comments on COVID19 vaccines and his support and love for Israel. They demanded he resign or be disciplined for his comments. How crazy.

The mobs also called for Adam Habib’s head not long ago. Habib was formerly professor and vice chancellor at Wits University before becoming Director of the School of African and Oriental Studies (SOAS) in London. The mob there wanted him gone because he used the N-word during one of his meetings with students at the University. Habib had vocalised the N-word while he was trying to explain that it is offensive and would not be tolerated.

We’re clearly a severely sick society. Always normalising lies. Spreading falsehood, harmful propaganda. We always want to blame “them”. It’s “them”, it’s not us. We are fixated on useless things that will get us nowhere as a nation.

We need to face up to the reality and be honest to ourselves if we want a better South Africa. We must tell people facts and the truth if we want to help them.

At the moment, we have destructive leaders who only want to advance their political interests. They are dishonest and bank on our divisions.

After last week’s incident, white guilt fell upon Nando’s and they terminated their sponsorship of Gareth Cliff’s morning show. The mobs won. If you think that this action by Nando’s advances the interests of black people, then you have been fooled.

When we see incidents of racism we must condemn them. We all have that responsibility. What we must not do, is point to racism where it is non-existent – brand people we disagree with as racist. Such must not be accepted.

I wonder, did Nando’s care to investigate and verify whether Mudzuli really does experience racism on a “daily basis” as she told Gareth? Or they just took her at face value and thereafter decided to pull out the sponsorship from Gareth’s show, threatening Gareth’s livelihood and the livelihoods of his staff? Where does she experience this racism? Is at her workplace? Is it in restaurants? To whom has she reported this to?

I see no evidence that an investigation was done. So these mobs took what this woman said at face value and ran with it? How irresponsible?

Nando’s action reinforces the false narrative that white racism remains a threat to black peoples’ progress – which is not helpful at all.

Shame on Nando’s! As for Gareth, I have added him on the list of my national heroes.