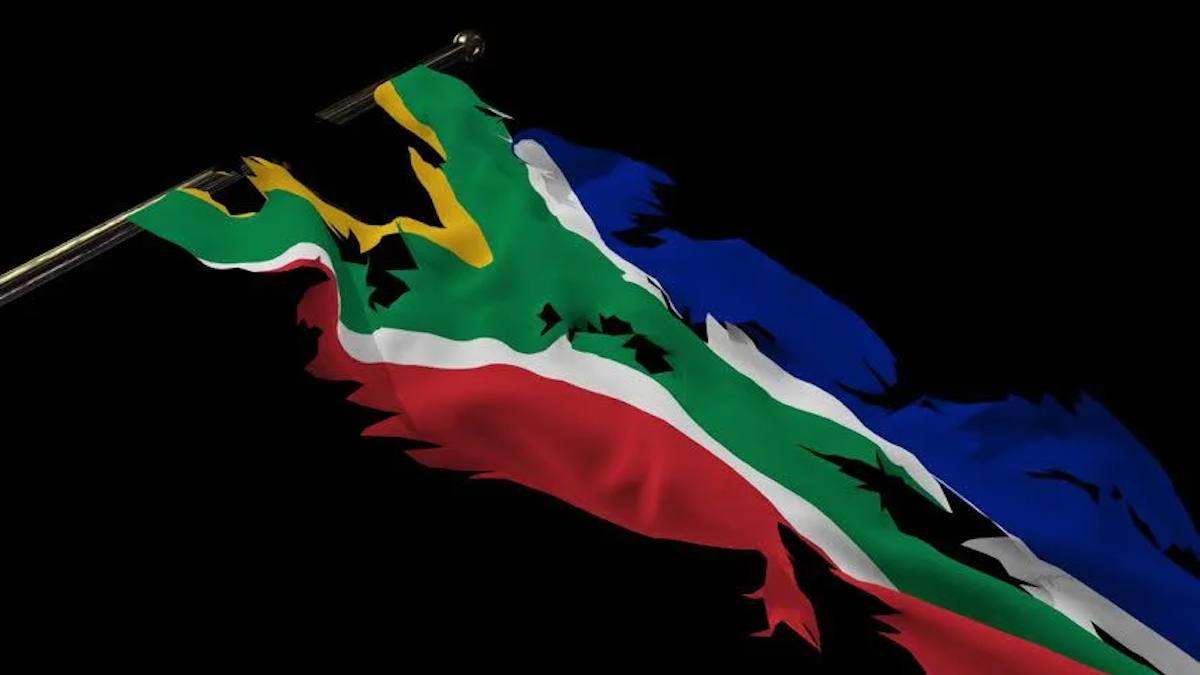 Andrew Kenny says in light of deteriorating conditions in South Africa, where the majority of the population has no choice but to grimly keep fighting for survival, the minority has two choices: emigrate or ‘selfish retreat’. The latter involves enjoying the physical beauty and weather, while making yourself as inconspicuous as possible, making no attempt to improve the state of the country but simply accommodating to its decline and decay, and never starting up any new business, knowing that the ANC will loot it and wreck it. But then he mentions the optimistic view of Frans Cronje, formerly CEO of the IRR, who can back it up with data and research. He believes there are real signs of hope – if we can get rid of the ANC. Draw your own conclusions after reading the article below, published courtesy of the Daily Friend. – Sandra Laurence

Should we give up?

(This gloomy article, I should say at the start, ends on a slightly optimistic note)

There are two main ways of giving up hope in South Africa. Unfortunately, neither is available for the great mass of South Africans (which means poor black people), who have no option but to keep fighting grimly for survival. For the lucky minority, which includes me, there are two options for surrendering: emigration and selfish retreat.

Emigration is becoming increasingly popular. We hear from estate agents and economists that an important fraction of house sales comes from owners who are emigrating and that our tax base is shrinking because so many of our taxpayers have left the country. In particular, although not exclusively, skilled white people are fleeing.

Engineers, technicians, artisans, doctors, nurses, maths teachers, science teachers, businessmen, accountants and IT experts are pouring out of the country. Despair about their future in South Africa is a major reason but not the only one.

Most of the people I knew from my degrees in physics and engineering have left for Europe, America and Australia. Many did so because they thought they would not be able to get a job in South Africa: employment agencies made it clear that whites need not apply for engineering jobs; senior Eskom managers earned big bonuses for getting rid of white engineers (and so meeting their ‘equity targets’). The ANC made it obvious that skilled white people are not welcome here. A white neighbour, an electrical engineer with two young sons, both keen on the sciences, told me as he was about to emigrate to Britain, ‘There’s no hope for them here’. Those who have emigrated found themselves doubling their salaries and enjoying a much higher standard of living and security.

A good way of assessing your future in South Africa is to look at the history of similar African countries. The obvious one is Zimbabwe, which is especially relevant to us since the ANC worshipped Robert Mugabe and clapped and cheered at his every action.

The ANC wants to do in South Africa what Mugabe did in Zimbabwe. Its central political ambition, the National Democratic Revolution (NDR), is very much like the policy Mugabe implemented. Its proposed Expropriation without Compensation (EWC) seems intended to copy Mugabe’s seizures of the private farms – although, to be fair to the ANC, it is warning us beforehand that it wants to steal our property, which Mugabe did not do.

Sometime in the 1980s, I remember a white man there announcing proudly, ‘I’ve decided to emigrate: from Rhodesia to Zimbabwe’. He wanted to embrace the new order in Zimbabwe under Zanu-PF and trust its glorious leader, Comrade Robert Mugabe. He sounded awfully like a lot of white liberals in the early days of the ANC. I don’t know if he was one of the majority of white farmers who had bought their farms under the government of Mugabe. However, most whites there decided to emigrate not to Zimbabwe but to Australia and Britain, where they prospered – although they continually pined for the beautiful land of their upbringing.

The lesson for white South Africans is clear: emigrate. But a few whites in Zimbabwe opted for the second surrender option: selfish retreat.

In South Africa, selfish retreat would go like this. You would not fight any of the ANC’s ruinous policies but you would try to hide away from their consequences. You would make yourself as inconspicuous as possible. You would make no attempt to improve the state of the country but simply accommodate yourself to its decline and decay, using every passive and selfish strategy you could. You would never start up any enterprise or new business, knowing that the ANC would loot it and wreck it. You would be quietly greedy without ever making a show of wealth. You would not invest a cent of your money in South Africa nor ever employ anyone permanently. You would not fight against violent crime but would keep yourself well-informed about it and make sure that it happened to other people before you. You would avoid all politics and never argue in public with the ANC or its woke fellow travellers in the universities and the mainstream media.

If President Ramaphosa assured the country that load-shedding would soon be a thing of the past, you would nod your head in agreement and then stock up on candles and fuel for your generator. You would live in a happy bubble, in a little isolated community of like-minded people, making frequent trips into the countryside, enjoying a pleasant life in the sun and the scenery, while the country sank into a dark age, and the poor starved and bled.

I saw this in Zimbabwe. My last visit there was in 2003 but by that time Mugabe’s NDR was in full stride and Zimbabwean agriculture had already been looted and wrecked. There was misery everywhere but there was a tiny group of white people who were living perfectly contented and pleasant lives. They didn’t own farms or produce anything on a big scale but somehow managed to eke out sufficient income to live in comfortable isolation in some of the most glorious scenery on Earth. They avoided all politics and never said a word against Mugabe in public. They had delightful little clubs and pubs, where you could drink beer and hear elephants not too far away.

I don’t know if all of that has ended now, but it certainly went on a long time after Mugabe began his violent destruction. I have little doubt that isolated communities of white people could do the same here for quite a long time while the ANC destroys this country.

I had these thoughts last week while writing an article on South Africa’s proposed small modular nuclear reactors. They are a wonderful idea, which could help solve our electricity problems, advance our economy and industry, develop our science and engineering, and provide good jobs. But dark thoughts kept coming to me. If you announced you were going to invest money in a new company to develop, build and operate this small, safe, clean nuclear power station, the ANC would pounce on you immediately. You would have to hand over 30% of your capital to a BEE partner. You would not be allowed to employ the engineers and managers you wanted but would have to employ black pals of the ANC under BEE.

The moment construction began, a gang of criminals with guns would demand another 30% of your company and might murder one of your executives to show how serious they were. (The police, of course, would do absolutely nothing.) The minister of trade and industry would forbid you from using imported materials and demand that you used more expensive local ones. BEE procurement would mean you were forced to buy inferior, more costly equipment.

Activists would incite local people to riot at your site, over something or another. (And, of course, the greens and the environmental minister would make every effort to stop your project but that is a different matter, not related to ANC corruption). So why even try? Why try any enterprise in South Africa when you know the ANC will wreck it?

People of power and influence

By the ‘ANC’, I mean the broader family of people of power and influence who think and act like the ANC and have connections with it. This includes the EFF, the RET group, and the gangsters and criminals allied to them. There is a wide spectrum of ANC corruption that goes from the legal corruption of BEE to malpractice in procurement and tendering to outright Mafia crime with construction gangsters. They all merge together. The EFF is simply a louder version of the ANC; the gangsters are its criminal arm.

To rescue the country, we have to get rid of all of them. But this seems impossible, in the medium term at least. Or is it? South Africa’s most convincing optimist thinks it is quite possible.

Frans Cronje, formerly CEO of IRR, shows singular optimism about our near future, and can back it up with data and research. He says that there are real signs of hope. He says we can get rid of the ANC. He says surveys show that in the next election, in 2024, the combined ANC and EFF vote might well fall below 50%, and a combination of opposition parties headed by the DA could well form the next government. Black ANC voters know that the ANC is corrupt and incompetent but are afraid of the violence that could follow their losing an election. They also know that the DA is competent and honest but are suspicious of its perceived whiteness and fear it might take away some of the few benefits the ANC has brought them. If these fears can be allayed, there is a good chance of a coalition government headed by the DA.

Coalition partners would have to include Action SA and other small parties, and so would have to prevent fracture, personal rivalry and internal competition. This might be difficult but would not be impossible. Many countries in the world with similar voting systems to ours are successfully ruled by such coalitions.

Such a coalition here could reverse the ANC’s ruinous policies, introduce sensible, constructive, just and decent policies, make the rule of law its guiding political philosophy and equality of opportunity its guiding economic philosophy, remove the shackles and chains that hobble our enterprise, allow the poor to join the formal economy, and unleash the immense talents and energies of our people so that our land can prosper.

Is Frans right? I hope so. Right now, I cannot prove him wrong. There are important differences between Zimbabwe and South Africa, and they all favour us.