JOHANNESBURG — Former ANC MP Makhosi Khoza — who shot to fame for her firm stance on wanting Jacob Zuma removed as president — launched a new political party on Monday. Dubbed ‘African Democratic Change‘ (or ADeC for short), Khoza said her party would differ from the ANC by ensuring it wouldn’t repeat the same mistakes. However, hours after launching ADeC, her party come under its first attack from the ANC. The ANC said it would lodge a complaint with the Independent Electoral Commission (IEC) over Khoza’s choice of party logo and colours. As you will see in the two images below, ADeC’s logo is remarkably similar to that of the ANC’s, especially the colour sequence. Top South African intellectual property (IP) law advisor, Darren Olivier, unpacks whether the ANC may then have a valid claim or not. Olivier has kindly let us republish his analysis which was first published on Afro-IP. – Gareth van Zyl

By Darren Olivier for Afro-IP*

A new political party has just emerged in South Africa and it is called the African Democratic Change (ADeC) lead by Dr Makhozi Khoza. It’s new logo has caused some outcry and much attention for the new party. This is why: 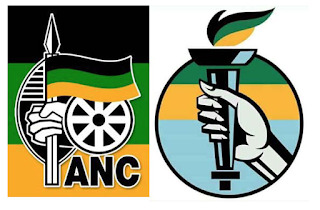 On the left hand side is the logo of the ANC and on the right hand side, that of ADeC. On the face of it there are a number of distinguishing factors; the use of blue, the juxtaposition of the various elements making up the mark and the fact that many of these elements are not uncommon in local political party logos. You can see that in this illustration below:

The use of circles, colour combinations of yellow and green and flames/sun type elements are quite common. One could argue that people/voters are used to these combinations and will focus on other parts of the logos, and not be confused. But is this the end of the matter?

The reality is that there are certain very stark similarities in the logos, especially the use of the black, green and yellow combination in the flame device in the ADeC logo. These colours are identical to the ANC colours (in exact pantone colour it appears), and also are juxtaposed in the same combination i.e. black, yellow then green. There are other important similarities too; the clenched hand holding a torch & spear, and the circle and wheel device and flag/flame flying concepts.

Passing Off and Trade Mark Infringement

Importantly, it is then not the entire ANC logo that is compared with the ADeC logo, but simply the colour combination in which they can show a reputation. Once can immediately see then, that arguments for a likelihood of confusion become greater and quite possibly could succeed. This ground is known as passing off.

Under trade mark infringement it really depends on how the mark is registered. If the colour combination is registered then the enquiry is much the same, though it could be more straightforward. If there is found to be use of an identical trade mark for identical services (as covered by the registered trade mark), then there is no need to show a likelihood of confusion, and the ANC would prevail.

Under the Advertising Standards Association Code

This is a code that regulates advertising in South Africa against advertising that is in conflict with the code. The new ADeC logo will qualify as an advert under the code and could be open to an objection by the ANC, if it can show that there is misuse of its advertising goodwill in the colour combination. This enquiry is very similar to the ground of passing off explained above, and if the ANC can show a likelihood of confusion then they will prevail.

When people are stealing entire billions outchea, Makhosi Khoza's theft of some colours is a minor sideshow.

However, there is an even stronger potential ground under the code and that is “imitation”. If there is imitation of an advertising concept then, even if there is no likelihood of confusion, the ASA Code could be used to stop advertising with that logo amongst members of the ASA, which include industry bodies regulating print, media and online advertising in the country. This could prove powerful even though the ANC or ADeC are not likely to be members of the ASA – the ASA’s recent ruling in the Herbex case  (on jurisdiction of the ASA and its indirect effect over non members) may come to their aide on this point.

The difficulty with using the code is that political advertising is excluded from the scope of the code. Consequently this forum would only be available in very limited circumstances.

Under the IEC Code

This code is aimed at ensuring free and fair elections in South Africa. The code has specific provisions against “plagiarising other party’s symbols, names and acronyms” and can impose a fine of R200 000 against a wrongdoer. Plagiarism is arguably more difficult to show than imitation and passing off because it implies actual copying, and is more a copyright term. (This is not really a copyright dispute as the colour combination is probably not able to meet the originality threshold for copyright to exist). That said, if one accepts that the colour combination is that of the ANC as an advertising concept or under passing off, then copying of that may sway the decision maker, rendering it plagiarism under the IEC code.

Political Analyst Somadoda Fikeni says the formation of the new political party by outspoken former ANC member of Parliament Makhosi Khoza is not good news for the ruling party.

This is not the first time, political parties are having a spat over logos. Indeed the ANC took on COPE in a similar (but different) dispute many years ago as reported on this blog here. Some may well say that this is intentional by ADeC, that the media coverage is well worth the legal risk and it probably is. As mentioned in these posts (here and here) on the new UKIP logo in the UK and the public commentary on the possible furore with the Premier League over logos, it is important for political parties to get proper registered protection for their symbols.