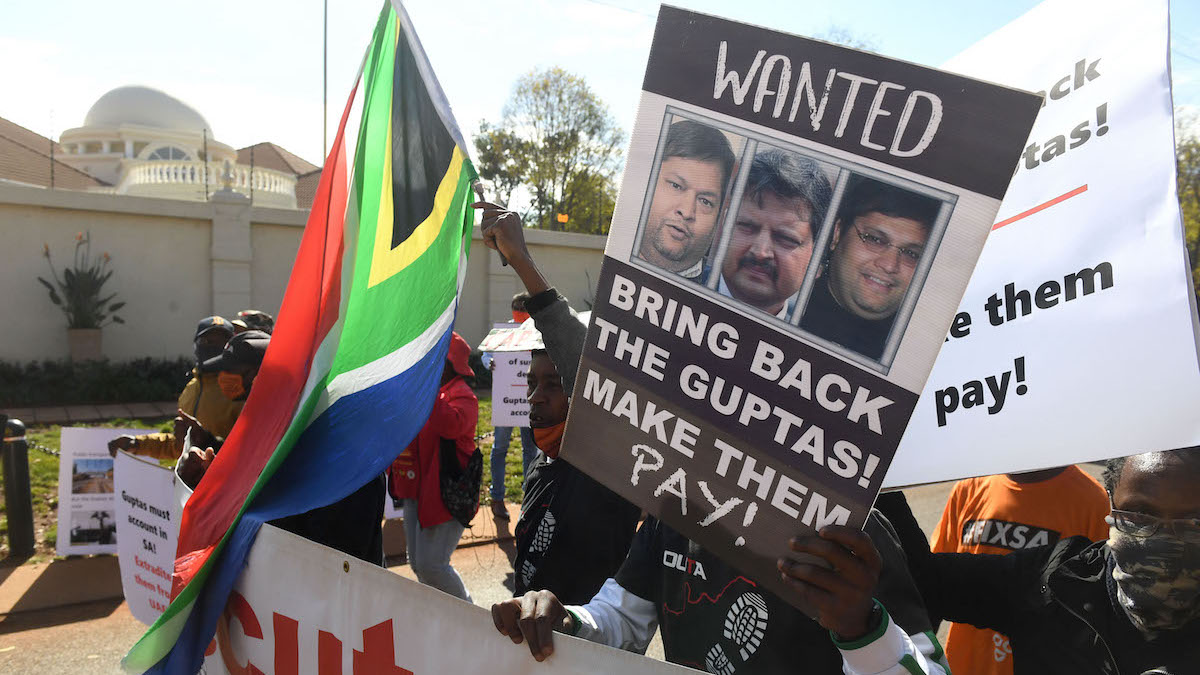 Get ready to grab your dictionary and open your mind to a world in which South Africa’s worst export – no, not Vuvuzelas, but close – the Guptas are imprisoned inside a jail of Simon Lincoln Reader’s making. SLR – as he’s known – has no mercy it seems and wants to go “nuclear woke” on our friends from Saxonwold. To misquote Shakespeare’s famous Twelfth Night opening, “if planning punishments for the Guptas be love…play on”. – Michael Appel

SLR: My kind of jail

Let’s not get too wankered on the news of the Guptas, lads. Whilst the hiveminds and soyjaks employed by Beijing24 congratulate themselves by drinking JC Le Roux out of intersectional Pride paper cups, we should be thinking about about how those dirty rotten money-launderers are scheming to bribe the crap out of some hitherto obscure Emirati Royal, who they’ll no doubt task with bribing the crap out of local authorities: “Now shut up and listen habibi peasant, I am second – not bastard – son of Tafiq elder fourth cousin of King habibi this Gupta arrest is mistake nothing wrong with Gupta people very very generous toward charity that making good performance electric shockings machine for young confused man who think he a girl”. The trap here of course is that if they plot this wrong, it’s extradition plus arm chop-chop, so, hope springs.

As it relates to their arrest, I’m well out of trust – for the locals there, our lot, Interpol, even the British and the Americans. The process should, but doesn’t, punish people like them – so with your approval, I’d very much like to build – and manage – the jail for the Guptas. When it comes to crime, families such as the Guptas or the Clintons, I’m not really into the whole lengthy-sometimes-microscopic-constitutional-details thing – I’m much more a rendition-black site-waterboard kind of guy, but here please entertain some nuance as to what I have in mind for them – and others.

Any participant of South African state capture, from the kingpins to even the most remote, apparently insignificant beneficiary, will be my first and primary group of inmates: the space will be built to accommodate over 5,000 of them. Now, you may think I’ll be blasting Rammstein at full volume into the cells 24 hours a day but actually, not. Instead we’ll be going nuclear woke here, lads: I’ll capture each bit of woke from our world as if it were puddles of vomit, swoop it up in giant casks, then pour it from the high walls with abandon – there will be so much pronoun usage, so much noise about invisible disability and fluidity that the energy hum could power all the world’s old age homes.

Consistent with my adherence to human rights, they won’t be alone. Littered amongst them will be other kinds of inmates.

At some point in the mid 2000s the documentary maker Louis Theroux visited a maximum security US jail. Separated by metres of razor wire from hardened prison gangs was a group of timid, slim, balding white men, huddled together. “What are you doing here?” Theroux asked one of the men. “The devil grabbed my soul,” the man replied, which is another way of saying, “I got caught with 3.5m class A indecent image” – or much, much worse. Now, this is EXACTLY the type of prisoner I want scattered amongst our state capture crowd – the objective being that everyone should keep each other on their toes. So, healthy.

Now for some turbo diversity. I’m going to throw the US democrat establishment in there too, along with their media and dark money militias, Silicon Valley and fact-checkers. To complement this vibrancy, I’m going to toss all the criminals this group really likes – antifa pederasts and murderers – whose bail they establish funds for, in with them – which is just academic. Most of Hollywood too, but on the bright side: there’ll be so much work now for Johnny Depp – hopefully we’ll see Jon Voigt cast as the next James Bond.

Not to worry about donating – characteristically kind as the thought is. The jail will be so woke that companies will be clambering over each other to sponsor – Dove will sponsor the mixed showers (we won’t discriminate) and Ben & Jerrys will sponsor catering. And the day that the Guptas start being force-fed a diet of micro-aggression accusations, justice will have finally concluded her sabbatical – and you and I can chill and have a Coke.