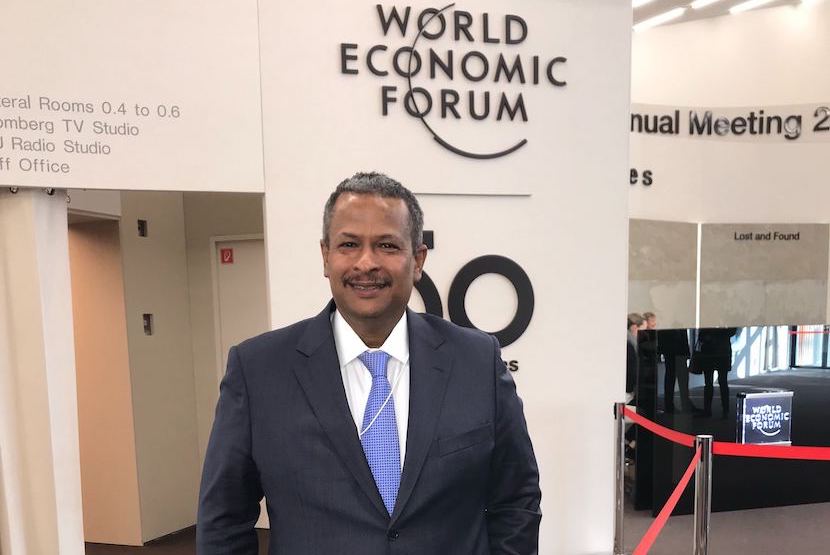 The power blackouts in South Africa have severely hampered businesses and especially mines over the past months. Eskom has been declared by many business leaders as a national energy crisis and many are now looking towards generating their own power. Also geared to take advantage of this, are the companies who want to speed up the use of renewable sources like wind and solar energy to fill the gap left by Eskom. While the Government has committed itself to have renewable energy in its mix of resources, Energy Minister Gwede Mantashe is accused of stalling the process as he is said to be protecting the jobs of coal miners. One of the companies that are ready to offer solutions to the Eskom crisis, is African Rainbow Energy and Power, the company started by Patrice Motsepe. Motsepe has been in the firing line back home after he told President Donald Trump in Davos “that Africa loves America. Africa loves you” with many South Africans disagreeing on Twitter. Speaking to Biznews at Davos, the Chief Executive Officer of African Rainbow Energy and Power Brian Dames said he believed the electricity grid in South Africa should be expanded. – Linda van Tilburg

This coverage of the global conversation on change is brought to you by BrightRock the first ever needs matched life insurance that changes as your life changes. I’m lucky to catch up with Brian Dames from African Rainbow Energy & Power. There’s a lot of buzz in South Africa about Eskom. You’re an ex-CEO, are you offering solutions for that?

No, there are many solutions available to us. When we look at the energy system in South Africa, we get so caught up with what is currently happening and what is happening is very important and should be dealt with. People should have reliable access to energy, it should be affordable and lastly sustainable. Today, in the world, we have lots of technologies that can deal with that and in South Africa we have a combination of all of these. We have an abundance of sunshine, we have great capability with wind, we have great entrepreneurs, great innovation – not only for providing large scale grid solutions but also to provide localised customer specific solutions for companies and customers – and then the other important aspect the expansion of the grid infrastructure.

How do you how do you integrate all of these different technologies, whether it is decentralised technologies for customers or whether it is centralised technology to strengthen the grid. The nice thing about where we find ourselves in the world today is that there are technologies to deal with that. We, at African Rainbow are building a variable African energy champion that is based on the clean energy portfolio – not only in South Africa, but across the rest of the continent. Now is the time to be able to do that. Being at the World Economic Forum allows us an insight into the technologies and where they’re going, but it also allows us a very close connection to partners globally – those that I have long relationships with and we as a company have long relations with and are very keen to work with us and invest in us to create this energy system of the future.

You have a very high tree in the form of Patrice Motsepe, and they tend to catch a lot of wind and yesterday he was criticised for saying, I love Trump and Mr Motsepe has also been criticised for the fact that he might benefit from the government’s decision to split up Eskom? How does your company deal with that?

I think we have made it very clear. We have no interest in the acquisition of any of the assets of Eskom. We have made that very, very clear. For us it’s our mission; we do business in a very ethical manner, in a very transparent manner and that’s the way global business works. No partner, no bank would want to do business with any company unless you have very strong governance principles.That is very important and that is what we have demonstrated up to now and that is what we will continue to do going forward. And I must say to you, many global companies have come to us and have come to South Africa and said, we have find in you very good partners that subscribe to those principles.

Many journalist have commented on the fact that South Africa did not get as much attention as in previous years. Did you find the international community was prepared to listen to your message?

Oh ja! The Invitations came the other way around. I did not come to ask for invitations, we were approached. Why, because South Africa remains a very important part of the African continent and the African continent is one of the largest growing industries and similarly South Africa is of the largest markets. It has very good infrastructure; it has one of the world’s best technologies and provides an excellent base to launch from and many companies know and recognise this. We know as a country what to do, we know what we need to do and I think we do have leaders capable of getting that done.

What do you take home from this year’s WEF?

One is that hat the world is in crisis around climate change, companies have to take a different perspective into account, that there needs to focus on stakeholders instead of shareholders and we need to take a longterm perspective and take a look at how we affect societies and how give basic services to people as well as how we stay connected to the rest of the world.

How do you balance the fear of job losses in the coal mines with the development of renewable energy in the country?

It is a real issue and something we can’t ignore. An example is Germany which is in a similar position to South Africa, in very big parts there is a significant concentration of coal mines and coal power stations. The German government has committed €40-60bn to deal with that crisis over a number of months. We do not have the the fiscal space to do that. But, we have the capability to re-skill, make sure that the system is just, that changes create new business and opportunities, We can’t hold the future back, it is very important that. Our children demand that we stay part of the global economy.