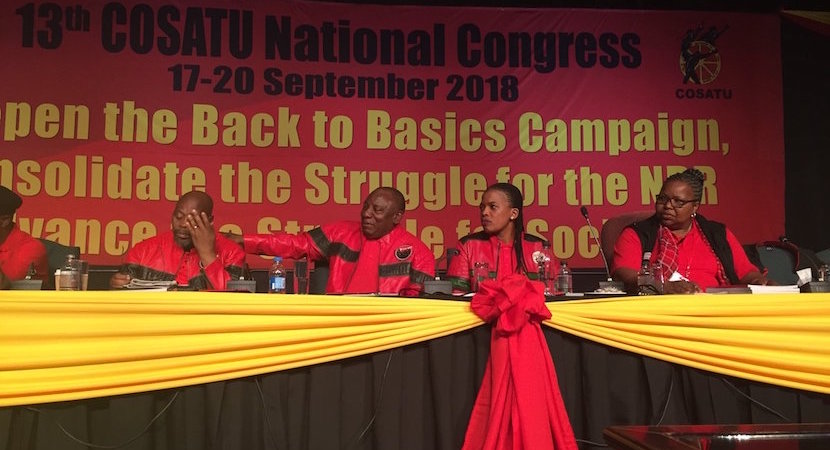 By Amogelang Mbatha and Nkululeko Ncana

(Bloomberg) – South Africa’s biggest labour group is campaigning for a strong mandate for President Cyril Ramaphosa in next month’s election and vowed to fight any attempt by factions within the ruling party to remove him from power after the vote.

Ramaphosa’s narrow victory for leader of the African National Congress in December 2017 has left him with a tenuous grip over the party and speculation that the losing faction linked to ex-President Jacob Zuma and Secretary-general Ace Magashule plans to manoeuvre him out of office before his next term ends. Support from the Congress of South African Trade Unions was instrumental in helping Ramaphosa win, and to replace Zuma as president a year ago.

“That will be the day they want to kill the alliance. We will oppose” any attempt to remove Ramaphosa, Cosatu General Secretary Bheki Ntshalintshali said in an interview in Bloomberg’s Johannesburg office. “It will be the worst kind of betrayal.”

The powerful labour federation has been an ally of the ANC since the party of Nelson Mandela took control in the first all-race election in 1994. Its about 1.8m members are encouraged to vote for the ANC, giving Ramaphosa a big potential support block. Opinion polls show the ANC may improve its showing on May 8 to about 60% from the 54.5% it garnered in a municipal ballot three years ago.

“Ramaphosa is fighting for political survival, and I think there will be an attempt to take him out soon after the election,” Andre Duvenhage, professor of politics at North West University, said by phone. “If he’s going to create a new dawn, Ramaphosa needs to be statesman. He needs to rely on personal popularity.”

A strong mandate for Ramaphosa, 66, in the election could give him more clout within the party and allow him to push through reforms the rating companies say are needed to boost anaemic economic growth and improve credit profiles. Initial optimism after Ramaphosa took over the presidency in February last year has faded as power blackouts and budget constraints weigh on sentiment. Business confidence is back below levels before he took over.

“We want to get the ANC 60% and above,” Michael Shingange, Cosatu’s first deputy president, said. “Given our work, because we are on the ground campaigning for the ANC, the party is going to get the necessary majority in order for them to implement their resolutions.”

A solid majority win for the ANC may also embolden Ramaphosa to take action against senior party officials who are implicated in alleged corruption, according to Shingange.

“We know that for now his hands may be tied here and there because of issues of the balance of forces inside the movement,” he said. “Once he and his organisation are strengthened after the elections, he will do more.”

The labour federation expects the ANC to win an outright majority in Gauteng, the richest region that houses Johannesburg and Pretoria, the capital, but would not back a coalition should the ANC fail to get 50% in the province.

“If they were to come to us to ask whether they should go into coalition with any other party, we would say: No,” Ntshalintshali said. “They must learn to be an opposition. By the way, the ANC is a bad opposition wherever they are. They have not mastered the issues of being an opposition.”

The ANC lost power in the Western Cape province in 2009 and its support declined in each subsequent vote as infighting curbed its ability to win back voters.

Cosatu is positive about Ramaphosa’s performance so far as president, and supports his moves to improve law enforcement agencies and to boost confidence in the economy.

“All hell will break loose as far as the alliance is concerned” if the ANC tries to remove Ramaphosa, Shingange said. “If they attempt it, and suppose they succeed, well, God help us.”