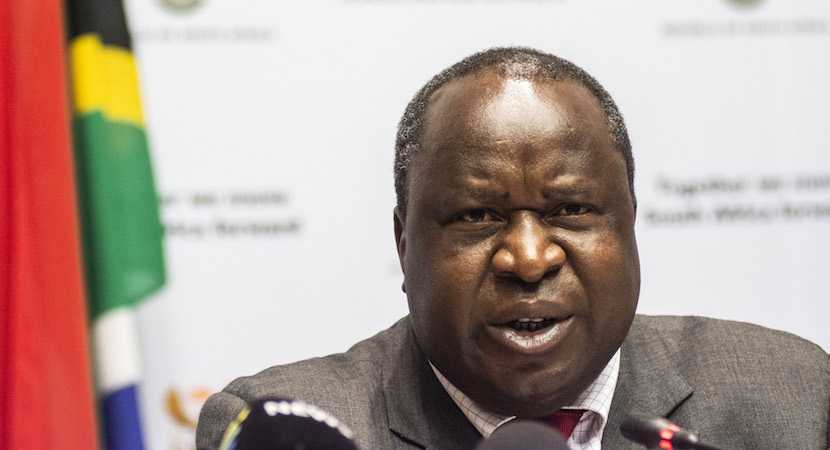 LONDON — Trade union movement Cosatu has never been a fan of Finance Minister Tito Mboweni. When he set his sights on the position in 2014, powerful allies on the left flank of the ANC prevented him being considered. His name was withdrawn from the ANC ‘s 2014 Parliamentary list after it was made clear to Mboweni that he would not be considered for the position as Finance Minister. With a new President in Tuinhuys, Mboweni did become Finance Minister and the battle between him and Cosatu was reignited. Cosatu has openly condemned some of Mboweni’s statements on e-tolls, South African Airways and state-owned enterprises. When he told investors that South African Airways was worthless junk, Cosatu issued a statement describing him “a raving street corner derelict…a potty mouth without any impulse controls…someone, who is looking for easy applause and nods of approval from his neoliberal overlords.” They also called on the ANC to reign in Mboweni. The latest salvo from Cosatu is that Mboweni who has previously stated that people should retire at 55, should “practice what he preaches” and go. But Mboweni is unlikely to heed their advice. In his budget speech in February Mboweni promised that he will be around for a while if the ANC wins the election. – Linda van Tilburg

Cosatu urges Mboweni to take his own advice and retire

(Bloomberg) – South Africa’s largest labor federation wants Finance Minister Tito Mboweni to practise what he preaches and retire. That may not be because he’s too old, but rather that they just don’t like him.

When Mboweni was appointed in October to replace Nhlanhla Nene as finance minister, the Congress of South African Trade Unions made it clear it should only be a transitional move, Michael Shingange, Cosatu’s first deputy president, said on Tuesday in an interview in Bloomberg’s Johannesburg office.

“This is a man who says people who are 55 years old must retire because they are too old,” Shingange said. “It would be a huge shock for us if Tito Mboweni was to avail himself to be the minister of finance,” after the May election, and that is something Cosatu would oppose, he said.

Cosatu’s problem with Mboweni, who turned 60 last month, is not only his age – given that the powerful labour federation helped Cyril Ramaphosa, 66, take over the presidency. It’s rather the former central bank governor’s stance on state companies that he says are over-staffed and should be sold off – ideologically opposite to the ruling-party ally’s socialist policies.

It’s now using Mboweni’s own words to motivate why he should go.

In the February budget Mboweni proposed offering early retirement to state workers who are 55 and older to help cut the government wage bill. The minister also said in a recent interview with Power FM that it’s time for old people to retire and young people to run the country.

Mboweni won union praise for introducing new workers’ laws when he was labor minister in the mid-1990s but was often criticised by Cosatu during his time at the central bank, for what the federation said was overly tight monetary policy.

Another minister in Cosatu’s crosshairs is Public Enterprises Minister Pravin Gordhan, who oversees state firms like Eskom Holdings SOC Ltd., the cash-strapped power utility the government plans to split into three units. The labor group argues that will lead to privatisation and job cuts.

While Gordhan, 70, was appointed to help restore trust and credibility in Eskom, rolling power cuts and constant crisis-management at the utility show that he is failing, according to Cosatu.

Since taking over from Jacob Zuma as president last February, Ramaphosa has changed the cabinet to appoint Mboweni and Gordhan, overhauled the boards of some state companies plagued by mismanagement and signed the minimum wage bill into law.

“We have to weigh the irritations of Tito Mboweni and Pravin Gordhan against the progress we have made and the access we have to the ruling party in terms of influencing the policy direction,” Shingange said.