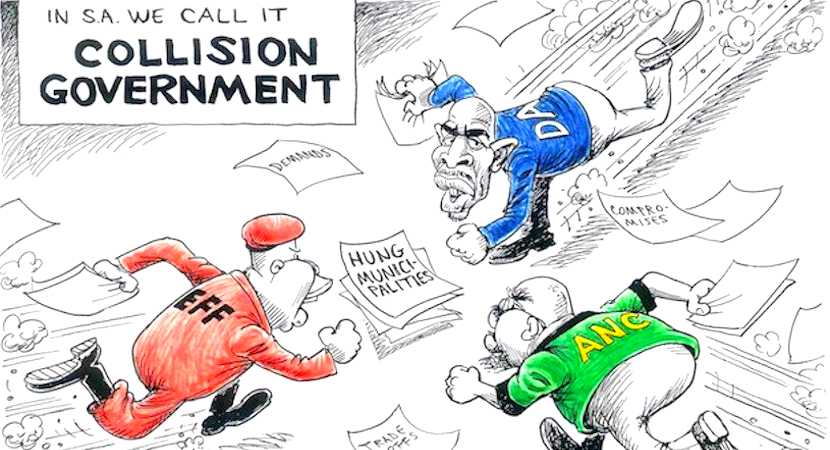 CAPE TOWN — In this very personal contemplation, Chuck Stephens of the Desmond Tutu Centre for Leadership, says the combination of uncertainties in living with a split ruling party (which cost us in State Capture more than the entire last budget), could see its undoing come the May 8th elections. When you absorb the full weight of the incremental revelations confirming just about every outrageous contention made years or even months ago, you have to ask yourself whether such a party in a proportional representation (PR) system is capable of shedding its corrupt, self-serving sycophants. Stephens argues for a multi-party coalition ousting the ANC. He sums it up best when he favourably compares the affability of President Cyril Ramaphosa and his chief DA rival, Mmusi Maimane; saying the former may also be clean, but that the smell of his own party is getting worse by the day. When former president Jacob Zuma tweets that apartheid agents in the State Security Agency are behind the latest confirmation that he grossly abused it in the Zuptoid battle against Ramaphosa (and everywhere else), that, in defensive State Capture-speak is almost as good as a confession. That particular herring is not only red, it’s dead – and beginning to pong a bit. – Chris Bateman

How many plane crashes will it take before people start flying on another carrier?

Since the February round-up, a few more planes have crashed.  The Bosasa plane had already crashed by then but they had not found the black box yet. One minute Agrizzi was a TV star the next minute he was being led away in leg-irons. Eskom was still suffering from indecent exposure at the Zondo Commission, and then came another credibility crash. Black Friday took on a whole new meaning on March 8th with the biggest city in South Africa load-shedded for the whole day. Not just target areas – the whole town.

The Deputy President stumbles in Parliament

David Mabuza is not really very visible but MPs were literally laughing at him when he tried to explain away State Capture as some kind of misunderstanding. Who is he kidding? Or was he just trying to mitigate the impact that his own High Court trial in Middelburg will have on the ANC’s election prospects – later in March? He has basically been accused of rigging the elections at Nasrec that brought him to be Deputy President. It looks like the Cat has used up his nine lives? His days could be numbered, another blow to the ANC’s election campaign.

From Manafort to Mbalula – the high risks of managing election campaigns

Manafort got jail time, but Mbalula has been exposed for having a much closer relationship to the Guptas than he had previously let on. This will cost the ANC in terms of its efforts to try to regain trust. Those smallanyana skeletons keep falling out of the closet.

Two quotes are enough to sum it up, sourced from the Daily Maverick:

“It appeared to the Panel there had been instances of serious criminal behaviour which had taken place under the guise of conducting covert work and that this behaviour may have involved theft, forgery and uttering, fraud, corruption, and even bordered on organised crime and transgressions of the Prevention of Organised Crime Act (POCA),” the panel found with regards to the PAN’s activities.

“There was more than enough information before the Panel that the then Minister [of State Security], in particular, involved himself directly in [SSA] operations. The Panel interviewed one member of [the] SSA who had previously served in the Minister’s office during his time as Minister of State Security, who confirmed to the Panel that he had, from time to time, been asked by a member of SO to pass parcels containing cash to the Minister,” according to the report.

Bad news from the most recent IRR poll

The most recent poll places the ANC at 54.7%. That is down 1.3% from the last poll in December. Q: Why? A: Bosasa. At the last elections in 2016 (municipal), the ANC won 54%. Its averaged fortunes are now sinking – far worse in some provinces than others.

Good news from the most recent IRR poll

First of all, both the DA and the EFF are getting stronger at the polls. In December they scored lower but the DA is now at 21.8% and the EFF at 12.2%. Worse yet, the polls are looking very much like the ANC will fall in Gauteng. Too many e-Tolls? That was one of the early plane crashes in its bid for re-election. The faltering SOEs was another one of those early plane crashes.

The Rand is heading for 15-to-1 to the Dollar

It is not just the rising cost of State Capture, which is now pegged at R1.5trn. That is more than the whole 2019 government budget. It is the combined uncertainties of living with a split ruling party. Will Eskom be un-bundled or not? Will the Reserve Bank be nationalised or not? Will prostitution be decriminalised or not? Will ANC cadres be punished for corruption or pardoned? It depends who you ask. The President had a lot of explaining to do in parliament the day after his Deputy President stumbled. This ambiguity is not good for electioneering.

The DA is on a roll

Maimane looks confident and he is every bit as affable as Cyril Ramaphosa. But he is young and vigorous. And “clean”. Ramaphosa may be clean too, but the smell of his party is getting worse.

The splinter parties are gaining some momentum

COPE’s manifesto includes re-jigging elections to start moving past the Proportional Representation system. This is a great drum to beat at election time. More power to the people. De-fang the parties. And now the IFP is getting tougher than anyone on crime – they want to bring back the death penalty. It sounds like anathema to a constitutional democracy with a Bill of Rights entrenched in its charter. But there are many traditional and religious people who don’t want government to be lenient any more. They want law and order.

This view has been espoused by a recent article about the real, deeper causes of corruption – by Karl Von Holdt of Wits University. He is also allowed two paragraphs to speak his mind:

“This links to the issue of violence. The emergence of new elite classes is often a ferociously contested, ugly and violent affair. South Africa is no different from many other post-colonial countries – or indeed the histories of the Euro-American elites that currently dominate the globe.

“In South Africa this violence takes the form of burning down homes and state facilities, intimidation, assault, the deployment of the criminal-justice system to protect some and target others, and, increasingly, assassination.”

The momentum for Land Reform is waning

The latest prognosis is that legislation always moved slowly and that there are various roadblocks on the horizon. Not the least of which is the general election on May 8th 2019. With an unemployment rate hovering somewhere around 30% (depending on who you talk to), the need for Jobs is looming larger than the need for Land.

Thuli Madonsela is asking: Is it Jobs we really need, or Work?

This is a profound question, which could re-ignite the push for Land Reform. Her analysis is that the emphasis on Jobs derives from a system of exploitation, by which indigenous people were pushed off their ancestral lands, to provide a cheap labour force – to grow the Economy. To her way of thinking, emphasising Jobs could be reinforcing that historical injustice. Although she tends to take that on to promote Entrepreneurship and Enterprise as the road out of poverty – as opposed to Jobs.

So why does training have to be accredited?

Starting with the OFO (organising framework for occupations) that connects Labour and Higher Education, the whole Training sector is built to enable people to get Jobs. Surely it would make more sense to emphasise Skills Programmes that just get people working? Could it be that our approach to Higher Education and Training is actually a bottleneck – a cause of unemployment rather than a solution? If the old mind-sets are locked onto a system that prepares people to work in factories and mines, then it is not serving the real needs of the people. In fact, is it still serving the needs of the employers?

The odds now favour the DA

My money today – two months before Election Day – is on the DA. Maimane has a strong team with a proven track record – like Msimanga and Mashaba. The DA is rising and the ANC is sinking, according to the latest polls. The DA is robust and has new ideas that fit the present… while the ruling party is still reeling from one plane crash to another. Their many mistakes are costing them dearly, and Maimane’s party could emerge unscathed and ready to form a coalition with some other opposition parties.

It is doubtful that the DA can rise fast enough to get more votes than the ANC. But by cobbling together a coalition, the aggregate votes could allow the “combo coalition” to displace the ruling party. It looks to me like that scenario is on the cards.

Please note: I am only a pundit and columnist, and not a member of the DA. This is NOT a paid political announcement.