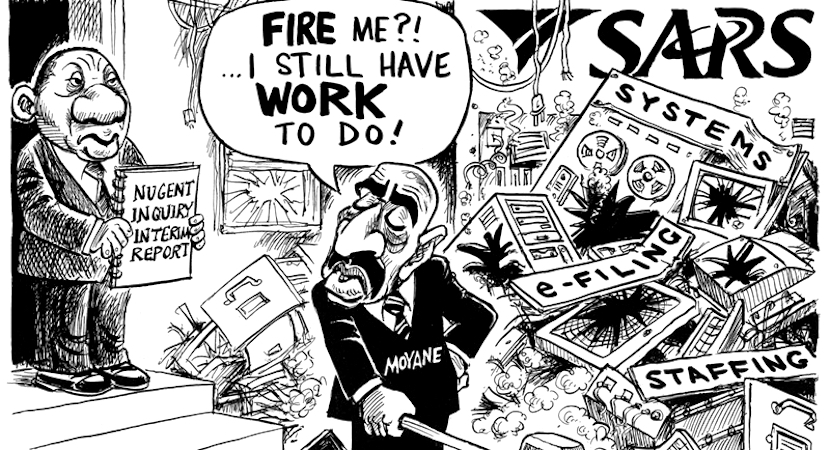 CAPE TOWN — Strange how disgraced SARS Commissioner Tom Moyane destructively stopped the revenue service’s modernisation project shortly before his friend Patrick Monyeki, acting as a “silent” empowerment partner of global advisory firm Gartner, helped put in a successful bid for a R200 million SARS IT contract. SARS derived little or no taxpayer benefit from the work while Gartner’s local point man was involved in questionable, possibly criminal conduct, a red-faced managing partner of Gartner conceded to the Nugent Commission of Inquiry this week. Gartner Managing Vice President Michael Lithgow’s stout bid to cover for his local senior managing partner, Neville Willemse, failed dismally. Willemse was subpoenaed anyway and gave shaky testimony, revealing that Monyeki contacted him out of the blue shortly after Monyeki’s friend, Moyane, halted the earlier SARS modernisation project. The evolving State Capture/cronyism narrative is proving that the culture of nepotism, corruption and impunity is/was rife across both the private and public sectors. Again, we’re reminded that human greed, like sexism, racism, xenophobia and homophobia, knows no barriers, no matter how players attempt to spin the story. Further proof as to why Judge Nugent recommended Moyane be summarily fired. Story, courtesy of the Daily Maverick. – Chris Bateman

In September Scorpio revealed that Tom Moyane’s friend Patrick Monyeki was embroiled with a dodgy contract between Gartner and SARS. Much of what Scorpio has revealed in September has been confirmed and discussed this week.

Willemse has known his business partner in the deal, Patrick Monyeki, for some time. Monyeki is the good friend and business partner of Tom Moyane, now suspended Commissioner of SARS. Monyeki is also the owner of Rangewave, the local company that illegally received a 40% chunk (about R80 million) from Gartner’s contract with SARS.

Another matter raising suspicion is that Gartner seemingly kept the appointment of Rangewave a secret from SARS. The revenue service could not find any acknowledgement or request from Gartner that informed SARS about the appointment of an empowerment partner. Under questioning from evidence leader adv. Carol Steinberg, Willemse was forced to concede to several irregularities and possible criminal conduct.

The most important concession was perhaps derived from his testimony about how Monyeki, seemingly out of the blue, contacted Willemse in around December 2014 to discuss an IT review contract SARS was about to publish. According to Willemse, Monyeki made it known to him that SARS specifically wanted Gartner to do an IT review of its systems.

It was a type of measurement of where SARS was at that moment. The discussion between Willemse and Monyeki followed days after Moyane stopped SARS’ modernisation programme without good reason.

Willemse and Monyeki seems to have met on 10 December to discuss the contract. Gartner, represented by Willemse, and Rangewave, then represented by Monyeki, continued to draft the terms of record for a SARS contract that was not yet published and that Gartner would ultimately win.

According to Willemse’s testimony he did not derive this mandate from SARS, but worked with Monyeki as a conduit. In fact, he conceded not to have ever spoken to SARS about the contract at this initial stage.

By way of explaining his conduct Willemse said Monyeki “told me [at the time] he met with SARS. It is not something he could have sucked out of his thumb”.

Willemse’s team then ceded about 40% of the contract to Monyeki in secret without informing SARS, the revenue service told Scorpio in written answers.

Listening to the stumbling Willemse’s attempt to explain away the scheme, Steinberg took no prisoners and said:

“Do you know that in South Africa that is illegal?”

He also argued that he was not a procurement specialist.

Willemse testified that he regarded Monyeki as a businessman in good standing and a “role model” for government. This conclusion is, however, not based on fact. A simple Google exercise will show that Monyeki has over the past decade been linked to several dodgy contracts.

When Scorpio questioned Gartner a month ago about Willemse’s role in the Gartner contract, the company declined to answer specific questions.

Scorpio verbally posed new questions to Willemse after his testimony. He denied that he was aware of the close relationship between Monyeki and SARS Commissioner Moyane. Scorpio has sources who contradict this statement. Willemse’s lawyer blocked follow-up questions.

After this major concession of how Willemse and Monyeki seemingly colluded to tailor-make a contract they would ultimately benefit from, Willemse’s testimony took a turn for the worse. Judge Robert Nugent, Commissioner, at one stage had to haul Willemse back from his meandering answers.

“Let me give you the rules of the game here. If counsel (adv. Steinberg) asks you a question, answer the question directly. If you want to explain it, do it thereafter.”

Willemse was subpoenaed by the Commission of Inquiry into SARS to provide his version of events. The commission had to ensure Willemse testified because Gartner nominated its managing vice president Michael Lithgow to put their case before the commission instead. Lithgow is based in the United Kingdom from where he had ultimate oversight over Willemse and his team, but has not had operational knowledge of the contract.

During the hearing on Tuesday Lithgow also conceded several times that the local team was involved in questionable conduct. Lithgow said he was confident that Gartner and Rangewave provided R200-million worth in service, but said he could not justify that the taxpayer had to foot the bill when SARS did not derive value for the money paid.

Judge Nugent made a pointed example when asking Lithgow if he would deem it above suspicion for a third party to profess itself as a conduit for Her Majesty’s Revenue and Customs in the United Kingdom. Lithgow hesitated for a moment before conceding that such conduct would not be acceptable in the United Kingdom.

This line of questioning made Lithgow turn bright red. He said:

“I feel pushed into a corner here, and I’m sure it is not intentional.”

Nugent replied, saying, “I’m not pushing you into a corner. I want an answer and I don’t get the answer. It is because you are changing the question all the time.”

Lithgow accused the judge of being irritated with him – a remark that solicited a chuckle from Nugent.

To get matters back on track, Nugent replied later:

Lithgow turned bright red again while spectators of the debacle giggled. Everyone, that is, except present Gartner officials and their entourage of lawyers.

The commission heard evidence from several SARS officials over the past two weeks of the concerning breakdown in SARS’ digital infrastructure since Moyane stopped its modernisation process. Gartner and Rangewave were employed to implement a new three-phase IT framework, but allegedly did not ensure a replacement for what was stopped.

Scorpio on Tuesday gained access to several documents emanating from the Gartner server. Gartner’s lawyers have also granted a request for a proper interview. Scorpio will probe the relevant information in the coming weeks.

In the meantime, the Commission of Inquiry has finalised this section of its public hearings. It has already provided a preliminary report to President Cyril Ramaphosa in which it recommends that Commissioner Moyane be fired with immediate effect. Ramaphosa will consider Moyane’s reply to the recommendation. The commission’s final report must be ready by the end of November. DM

(Bloomberg) – Gartner Inc. has become embroiled in a management scandal at South Africa’s tax agency after it emerged that the US information technology research company secured an almost R200 million ($13.9-million) contract without proper procurement procedures being followed.

The South African Revenue Service hired Gartner to assess its information technology and modernisation programs, one of several initiatives spearheaded by Commissioner Tom Moyane that failed to produce the desired results and coincided with the agency repeatedly missing its collection targets. President Cyril Ramaphosa suspended Moyane in March and appointed a panel headed by retired Judge Robert Nugent to investigate his time in office.

Gartner never inquired how it had secured its contract without having to bid for it and relied on the tax agency to ensure that it complied with state procurement rules, Neville Willemse, the company’s senior managing partner in South Africa, told the commission on Tuesday.

“We would understand it is their responsibility to do that,” he said. “That satisfied us that the correct process had been followed.”

MUST WATCH: Judge Nugent
“We stick by our main recommendation and that is to remove Tom Moyane as commissioner.” #eNCA #SARSInquiry pic.twitter.com/8mfZ3H7I7b

Willemse also said Gartner drew up terms of reference for the project together with Rangewave Consulting (Pty) Ltd., which was subcontracted to do part of the work and received about 40 percent of the fees, without Gartner having ever spoken to SARS officials. Rangewave is owned by a close friend of Moyane’s, Johannesburg’s Business Day newspaper reported on Oct. 18.

Johnstone Makhubu, the tax agency’s head of finance, told the commission last week that the process of awarding the contract to Gartner and Rangewave was improper and the tax agency had “thrown out the rule book” in the process.

Nugent and members of his panel questioned Willemse at length about the contract and indicated they weren’t satisfied with his responses.

Michael Lithgow, a Gartner executive who oversaw its work at SARS, said a committee outside South Africa had been put in place to ensure best practice compliance, and the project didn’t produce value for money because the tax agency didn’t properly implement it.

“As a professional, I am upset that the effort we put into this may not have delivered what all parties hoped for,” Lithgow said. “There was a vast amount of turbulence in SARS at the time we were doing this engagement. Nobody was sure they had a job.”

In August, Nugent’s commission heard testimony from then-finance Minister Nhlanhla Nene, who disclosed that Bain & Co. was paid R164 million to help restructure SARS, and that the project had served to weaken what was once an efficient organisation. The Boston-based company responded by removing the head of its South African business and initiating an independent probe into the work it did for the revenue service.

So, Bain & Company's Vittorio Massone penned an email, on the 28th of August 2014, to his colleagues, mentioning the imminent appointment of Tom Moyane as SARS Commissioner almost a month before the announcement? Incredible.

Moyane was closely allied to Jacob Zuma, who was forced to quit as president in February under pressure from the ruling African National Congress after a scandal-marred tenure that lasted almost nine years.

Opposition parties have accused Moyane of deliberately weakening the tax agency to protect senior politicians who failed to declare all their income. Moyane denies any wrongdoing and has challenged both the legitimacy of Nugent’s commission and his suspension in court.