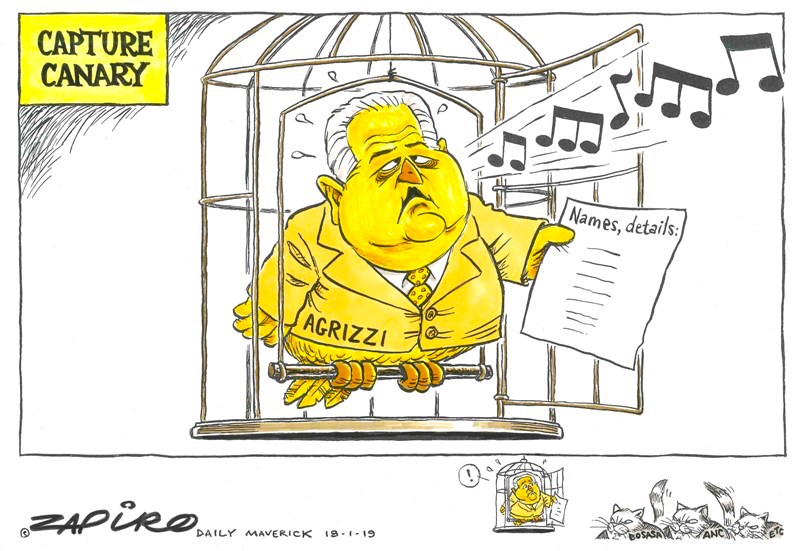 LONDON – The ANC was edging up its support to 61% at the beginning of the month according to the latest Ipsos poll. This was before former Bosasa executive, Angelo Agrizzi took to the stand at the Zondo Commission and exposed a corrupt tender machine that stunned the nation. With the opening of another ANC Pandora box of corruption, it will be harder for the organisation to prove that it had turned its back on the nine years of Zuma rule. Many of Zuma’s cronies are still sitting in President Cyril Ramaphosa’s cabinet. The proof of where the ANC stands and whether the electorate will trust the former liberation movement with their future is likely to come when the ANC publishes its final election lists. It would be interesting to see whether those implicated will still be given positions of responsibility. – Linda van Tilburg

(Bloomberg) – Just when South Africa’s ruling party thought it was on the way to rebuilding its image before this year’s election, along came Angelo Agrizzi.

A former executive at services company Bosasa, Agrizzi has captivated the nation with televised testimony at a judicial panel probing graft during Jacob Zuma’s presidency about how the firm won state contracts worth billions of rand by bribing top African National Congress officials. He also said the company helped the party divert taxpayer money to fund election campaigns.

Agrizzi’s revelations will make it harder for the ANC to prove it’s committed to stamping out the graft that marred Zuma’s almost nine-year rule – especially since several of those implicated remain in their posts.

“The ANC as a party is a shadow of its former self,” said Sethulego Matebesi, a political analyst at the University of the Free State. “The information coming out could affect how the middle class decide how to vote. The party can never be the same after all of this exposure.”

Whether that will translate into a reduced share of the ANC’s vote in elections expected in May is less certain because its main rivals, the Democratic Alliance and Economic Freedom Fighters, are facing their own problems. The DA has been beset by infighting while EFF officials have been linked to payouts from a collapsed bank.

Opinion polls conducted before Agrizzi testified showed the ANC on course to win about 60 percent of the national vote. That would be an improvement on the record low of 54% in 2016 municipal elections, when disgruntlement with Zuma’s immersion in a string of scandals sapped support.

Ultimately the party forced him from office in February last year and appointed his deputy – and new ANC leader – Cyril Ramaphosa in his place.

While Zuma has been accused of allowing members of the Gupta family, who were his son’s business partners, to influence cabinet appointments and state contract awards, a number of other of politicians and officials are now also alleged to have been on the take.

Bosasa, renamed African Global Operations, paid out R4m ($256,000) to R6m in bribes each month, according to Agrizzi, who was the company’s chief operating officer from 1999 to 2016 and claims to have handled many of the cash payments. He’s received death threats and been placed in a witness protection program.

“It is not easy for us as young people to listen to how a single company can pay so much money to a few politically connected people,” said Lesiba Ngwenya 35, an unemployed resident of Kagiso, a township near Krugersdorp, west of Johannesburg. “I haven’t joined the EFF, but I will certainly vote for them just so that I can contribute to stopping the top politicians from eating, while watching us suffer.”

The ANC has said the judicial panel headed by Deputy Chief Justice Raymond Zondo has its full support, but the testimony is untested and legal processes must run their course before it acts against implicated officials. Ramaphosa insists the revelations won’t badly affect support for the ANC and that the party will win a decisive election victory.

“The past few years, we lost our way. We have found our way back,” he said in a speech during a visit to India. “We are cleansing our country and our institutions.”

While the ANC’s support for Zondo’s panel could demonstrate it’s serious about tackling corruption, it needs to show the culprits will be held accountable and the proceeds of crime will be confiscated, according to Mcebisi Ndletyana, a political science professor at the University of Johannesburg.

“The credibility of the party is at stake,” Ndletyana said by phone. “They need to make sure they disapprove of and distance themselves from those implicated.”

Thembeka Khuzwayo, 66, who sells meat and corn porridge from a roadside stall in Kagiso, is undecided whether she will vote.

“You see change around you but it’s the councilors and the politicians whose lives are changing,” she said. “It doesn’t surprise me that they ate all that money with Bosasa.”