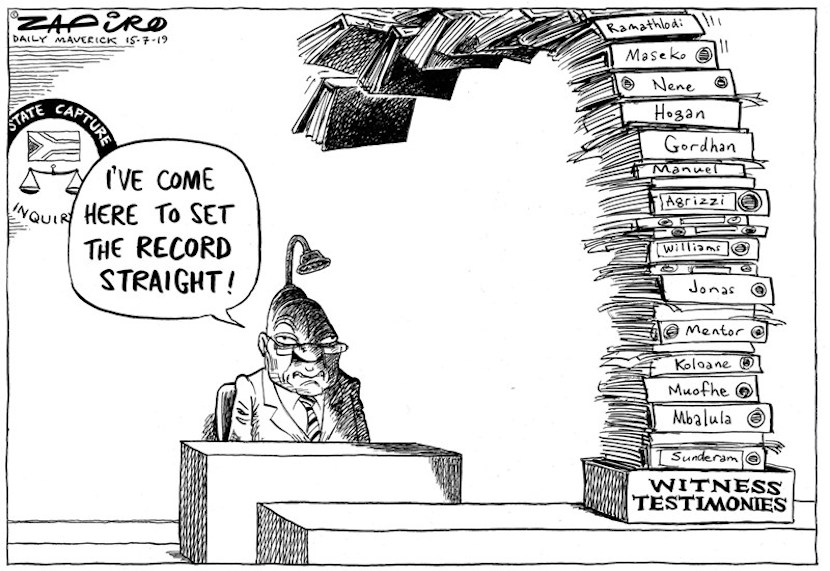 On his first day of testimony at the Zondo Commission, former South African President Jacob Zuma played the victim card. He rejected the notion that he aided, abetted and benefited from graft during his time in office. Former Finance Minister Pravin Gordhan estimates this bill to be around R100bn. As Zuma enters day two, one can expect much of the same, but the Bloomberg team is on the ground, putting together the highlights of what’s happening. It’s a great stop gap for those that aren’t able to watch. The story will be updated as new information filters through. – Stuart Lowman

By Nkululeko Ncana and Amogelang Mbatha

(Bloomberg) – Former South African President Jacob Zuma began a second day of testimony at a judicial panel that’s investigating whether he consented to and benefited from widespread looting during his nine-year rule.

Here are the latest developments, updated throughout the day. (Time-stamps are local time in Johannesburg.)

Zuma’s lawyer objected to questions posed by the judicial panel’s lawyers, saying their client was being subjected to cross-examination about meetings he never attended and phone calls he made years ago, and he could only be asked to respond to allegations of wrongdoing that had been levelled against him.

Paul Pretorius, the head of the panel’s legal team, rejected the argument, saying Zuma needed to give his version of events. Deputy Chief Justice Raymond Zondo, who heads the panel, said the lawyers had agreed on a line of questioning that would ensure Zuma wasn’t treated unfairly and proceedings could continue.

Ace Magashule, the secretary-general of the ruling African National Congress and a close Zuma ally, is attending the hearings. Asked about claims Zuma made on Monday that Ramatlhodi was an apartheid-era spy, Magashule said: “They are serious, you can’t just ignore them. Jacob Zuma was the chief of intelligence in the ANC so he will know even things that we didn’t know.”

Zuma starts his testimony by alleging that he’s received a death threat following his appearance at the commission on Monday. Zuma said his personal assistant received a call overnight from an unidentified person who threatened to “kill him and his children and those around him.”